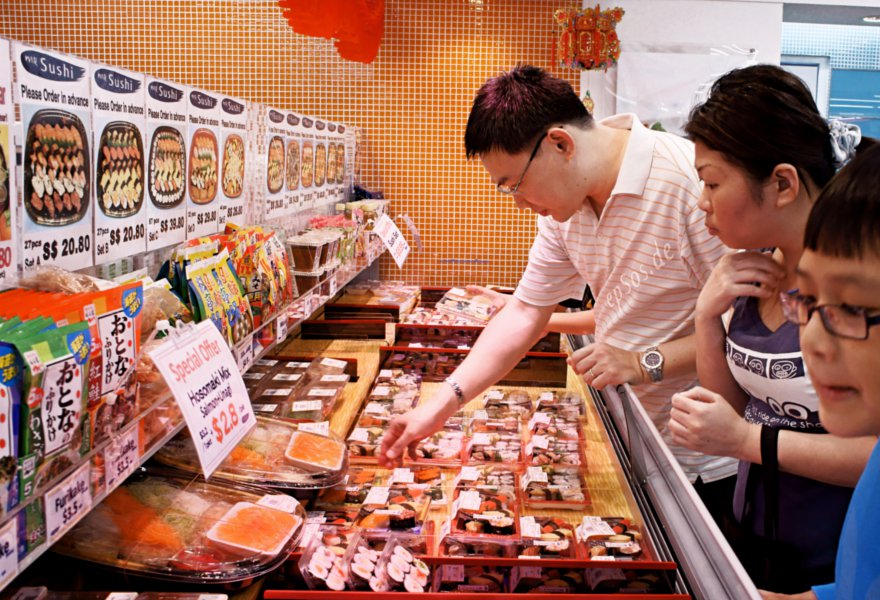 Obesity is the most prevalent form of malnutrition. The World Health Organisation estimates that more of us are overweight and obese than underweight, and in developing countries like Africa and the Eastern Mediterranean, obesity-related deaths are still on the rise. But there’s a strange dichotomy at work, and now that obesity is affecting more than 500 million adults worldwide, it’s more apparent than ever.

While in Europe and the US, obesity is a bigger problem for low-income areas (even homeless people aren't immune), in the East, rapidly expanding economies and increased urbanisation mean that obesity levels amongst the wealthy have skyrocketed. According to Harvard’s School of Public Health, in low and middle income countries, obesity is increasing at a faster rate, and those with higher incomes are actually at greater risk. This is largely due to the “nutrition transition”, the globalisation-induced shift to Western diets and ways of life.

Nowadays, food is cheap. In 1994, the General Agreement on Tariffs and Trade formally included agricultural products for the first time, leading to a more open global agricultural marketplace. In the last 40 years, the price of beef has dropped by 80%. While trade liberalisation had brought food prices crashing down, it has also made nutritionally empty foods more available than ever before. Fast food chains are free to expand into new territories, proffering high-calorie snacks on every street corner. McDonald’s, for example, opened its first Chinese outlet in 1990; by 2006, 1,000 restaurants were in operation. Low-income workers in rural areas now have easy access to cheap Western foods but, Harvard says, “they don’t yet have the healthcare and knowledge about healthy foods and physical activity that would help them keep their weight down.”

More than half of the world’s population lives in cities, compared with 10% 100 years ago. It’s easy to imagine why city living would make us want to eat differently – possible explanations include bigger, more widespread fast food campaigns, easier access to that fast food, higher stress, less sleep – but it’s the sheer speed of development which is at the crux of the problem. Technology, automated transport and the sharp rise of city jobs have catapulted low- and middle-income populations into the future, but often new urban areas develop so quickly that the healthcare and education infrastructure is lagging far behind.

Furthermore, residents in these countries might actually be at greater risk to start with. Take the growing frequency of early onset Type II diabetes in India for example. In Western countries, the disease tends to affect people in their 40s or 50s but Indians in their early twenties are being diagnosed with the illness. Nature reports that in 2010, India had 50.8 million sufferers; but by 2011 this had risen to 62.4 million people, according to the International Diabetes Federation (IDF) and the Madras Diabetes Research Foundation.

More worrying still is the increase of the disease in rural areas. As Nikhil Tandon, an endocrinologist at the All India Institute of Medical Sciences in New Delhi, explains “Villages in wealthier southern states like Tamil Nadu and Kerala are seeing prevalence hit double digits, which is enormous,” he says. “If it was confined to affluent India, you could still put a lid on it, but now it's rising quickly all over the country.”

This might not just be down to increased urbanisation, fast food consumption and lack of exercise. Specific features of Indian physiology are thought to increase an individual’s risk of contracting diabetes. Catherine Fall, a paediatric epidemiologist at the University of Southampton, says “Indians have less lean mass, more body fat, and more central fat than a white Caucasian. All of these very much increase the risk of diabetes.” She also points out that gestational diabetes, high blood glucose in pregnant women, which is 5 or 10 times more common in Indian cities than in the UK, significantly increases the chance that the new born child will develop diabetes later in life.

Generally researchers have found that in low- and middle-income countries, increases in adult obesity rates tend to precede increases in child obesity rates, fuelling interest in how and why the disease might be passed down from mother to child. It might be that so-called “lifestyle diseases” plague middle-class mothers who struggle to both work and provide for their families at home. In booming parts of India, for example, an increasing number of high-powered working women breastfeed less and are more likely to buy ready-made foods for their family. As Dr VS Ambal, a physician at the Santhigiri Health Care Research Centre at Pothencode in Thiruvananthapuram, points out: “There has been a major shift in the food habits of working women in cities, who prefer to have fast and packaged food due to work pressure, standard of living and convenience.”

Similarly, in parts of Africa, maternal obesity is widespread, and could have devastating effects for newborns. Rather than feeding the world, perhaps the global focus should shift to improving health facilities and education. In fact, if research on diet, diabetes and heart disease published in New Scientist this month is anything to go by, most of us could do with a bit of fasting once in a while.

Lifestyle Diseases: Shifting the Obesity Hump
Exploring the Deliciousness of Insects
The Social Function of the Sauna
Breakdown: Fabrics in Question
Cartographies of Life and Death

Exploring the Deliciousness of Insects
Cartographies of Life and Death
Dirty Rotten Vegan IV - Some Like it Raw
The Social Function of the Sauna
Breakdown: Fabrics in Question