Token Wild Boy, Vol II - The Height of My Seat

Category
Radical Habitation
Space
Uncategorisables
Token Wild Boy, Vol II - The Height of My Seat
by Merlyn Driver
Published: Jan 18, 2013
Standfirst
In Volume II of his fortnightly series for the Journal of Wild Culture, writer and musician Merlyn Driver takes us for a night-time walk on the Orkney Islands in the north of Scotland.
Body 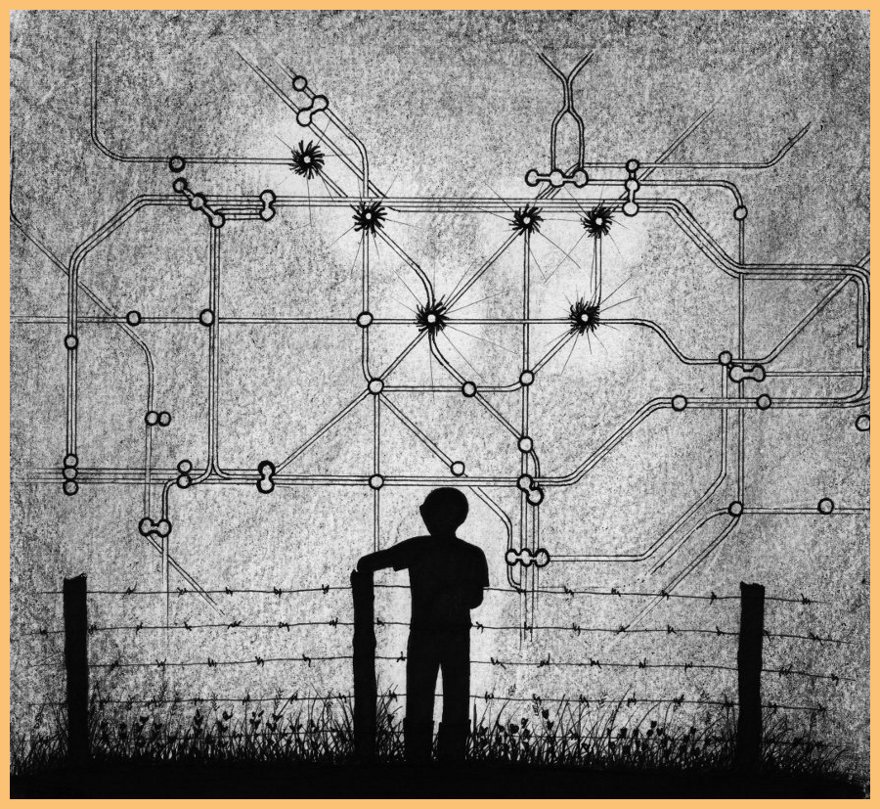 When I was very young, I'd spend countless hours playing among the sycamore trees that grew behind the house. Their bark was covered in a healthy crust of mint-green lichen and each and every branch had its own unique personality. My favourite one reached out almost horizontally with a comfortable seat and a long neck with a leafy mane. During summer days, I'd sit there watching hoverflies as they whirred about and stopped in mid-air as if held by invisible pieces of string. Sometimes, I'd stare down and imagine myself suspended above a lush tropical rainforest. Rather than seeing the mossy earth just a few feet beneath, I gazed onto a canopy made small by the height of my seat.

When it came to scale and distance, childhood was a period of great confusion. I knew, of course, that I wasn't really dangling above the rainforest, but I did, on the other hand, think that I could see to the ends of the earth simply by looking out across the fields beyond the garden fence. Although my mother had informed me that the world was round, I took this as meaning that we lived inside a bubble and that if I walked for long enough, I'd reach some kind of wall.

She and I used to go for walks late at night along the narrow roads near the house. If the moon was full, and there was enough light, I'd jump the deep drainage channels that had been dug into the verge. They weren't wide, perhaps just a foot or so, but they were deeper than they looked. We called them 'hoppits'. When I was little I was forever being swallowed by the mischievous hoppits.

It was on one of these night-time walks that I was introduced to the Saucepan in the Sky, a constellation of six stars positioned in the shape of a saucepan. If you stare straight at them, they seem to disappear into the night sky, but if you look into the space to either side, the whole constellation shines in the corner of your eye like a lighthouse beaming out across the North Sea. By pointing out this particular constellation, I felt that my mother had chosen it for me especially; as far as I was concerned it was a gift. Since that moment, the Saucepan has been something to hold on to. It's one of those reassuring things that won't change, like the birthmarks on our skin.

When I was growing up, there was always a piece of the earth that felt 'mine'; what lay beyond the horizon, was, at that point, of little consequence. I'd patrol the edge of the property like a proud, territorial baboon. Atop stone walls, or balancing on barbed-wire fences, I'd look out into the unknown, feeling entirely at ease. What mattered at this time were the details of my surroundings; the flavour of every leaf, the shape of every stone. Over time, I came to know the land beyond Newtonhill; the hill where fat white mushrooms sprang up after heavy rain, the slight hollow where primroses grew in the spring. I learnt where to find eggs, rabbits and other sources of wild food. Before I began to take in the world as a whole, I got to know my own piece of it in intimate detail.

As I got older, I started to realise that instead of starting with a few square miles, most people seemed to have been thrown in at the deep end. They had a vague understanding of entire countries and continents, but they'd been separated from the world outside their front door. Since moving to London, I've noticed something similar happen in my own life. Whenever I leave the house, I almost invariably turn left and head towards the main road where I can walk to the tube, or catch a bus. There would seem to be no reason, besides curiosity, for me to walk in the opposite direction (it simply leads to a maze of residential streets and culs-de-sac). The unknown is never very far away in a big city, but it's easily ignored. As long as there's a map of the underground at hand then everything else, we tell ourselves, will be okay.

From time to time though, I miss having my own constellation. I look up and scan the sky, in the faint hope that a little saucepan might appear.


Next up: Vol III, Bird Island, to be published Friday 1st February!