Trump at the Crossroads gets advice from the other Vladimir

Category
Dissent
Movements & Communities
Politics & Power
Trump at the Crossroads gets advice from the other Vladimir
by Herbert Wright
Published: Feb 12, 2017
Standfirst
The 100th anniversary of the Bolshevik Revolution in Russia is Year One of the Trump presidency. Much has been said about Vladimir Putin and the President-Elect, but what about Vladimir Ilyich Lenin, who led Russia’s 1917 revolution and established the world’s first communist state? Lenin, like Trump, defied expectations, smashed the political machine, and grabbed power. Maybe the two of them might have had things to talk about. Imagine* a scene, a few years ago, when Donald is fishing for what to do next. [Drawing by Brad Harley]
Body

Along the streets of the East River, the moonlight catching his cuffs, the Donald glimpses the other Vladimir.

Night-time, some years ago. Leaving the sparkling Manhattan skyline behind it, a limo has descended from the 59th Street Bridge into Queens and drives slowly through deserted streets of warehousing and empty lots. A man in a heavy coat and a cap seems to come out of nowhere. He steps forward on a corner holding out his arm, like he was hailing a cab. The limo pulls up and Donald Trump steps out.

‘Is this the crossroads? Are you The Man?’ he calls out.

Vladimir Ilyich Lenin replies: ‘Man’s consciousness not only reflects the objective world, but creates it.’

‘Listen to me, Vladimir, listen. I have everything. I have real estate, I have skyscrapers and golf courses, I have beautiful women — any woman I want’. Lenin stands motionless, staring at Trump intensely. He narrows his eyes and takes his cap off to scratch his bald head.

‘And I have great hair,’ adds Trump. ‘But I’ll be honest with you. I made a lot of money and I made it too easily, to the point of boredom’.

To rely upon conviction, devotion, and other excellent spiritual qualities; that is not to be taken seriously in politics.

‘Yeah, exactly. Because I’ve done everything.’

‘The oppressed are allowed once every few years to decide which particular representatives of the oppressing class shall represent and repress them in parliament’.

‘You mean Congress? Are you telling me I should run for Congress? If I ever ran for office, I’d do better as a Democrat than a Republican. And that’s not because I’d be more liberal, because I’m conservative! But the working guy would elect me. He likes me. When I walk down the street, those cabbies start yelling out their windows’.

Lenin nods. Trump continues, ‘But Congress? Nah. Nothing gets done in Congress. It’s like too many cooks in the kitchen’.

‘Any cook should be able to run the country,’ says Lenin.

‘History is moving in zig-zags and by roundabout ways’.

‘Those Republicans are turning into a bunch of losers. I’m a winner. You know, I’ve fought to build a very, very, very successful business empire’.

Trump holds his hands up like a gun was pointed at him. ‘It’s all God and guns with the Republican guys. It ain’t for me’.

Lenin thrusts his hands in his trouser pockets and looks down for a moment, nodding, thinking. ‘One man with a gun can control 100 without one’. Then he looks up, and resumes staring at Trump. ‘To rely upon conviction, devotion, and other excellent spiritual qualities; that is not to be taken seriously in politics.” 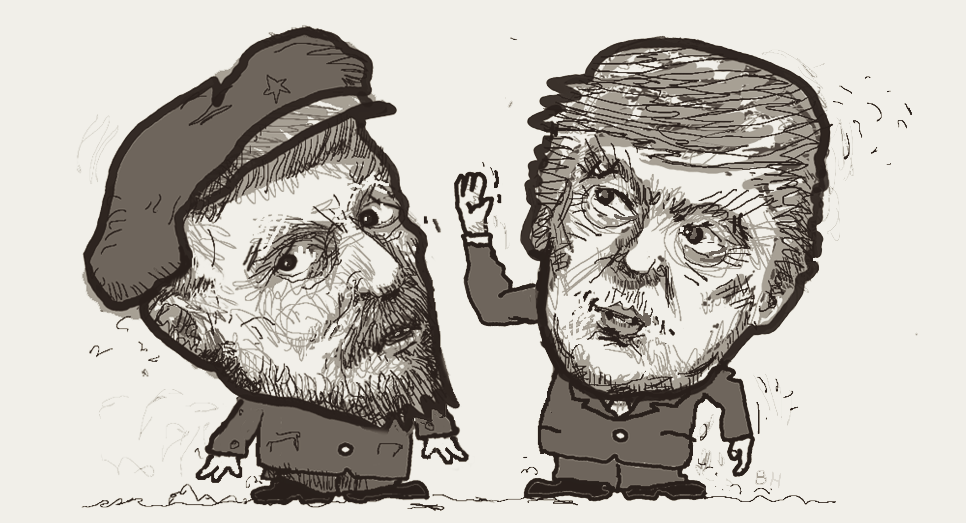 ‘People always have been the foolish victims of deception and self-deception in politics, and they always will be until they have learnt to seek out the interests of some class or other behind all moral, religious, political and social phrases, declarations and promises’.
‘Okay, okay. But I need a platform. I’m a businessman. I don’t know the game. They have positions, they have cards to play. How do I deal? What’s the position?

Lenin juts his chin forward, his beard pointing as sharp as a finger at Trump to underline his words: ‘It is, of course, much easier to shout, abuse, and howl than to attempt to relate, to explain’.

Trump falls silent for a moment. Then he says: ’Vladimir, you are truly a great leader. You are in a league of your own. Honestly. Now, what is that you want?’

‘The dictatorship of the proletariat’.

‘I like it, I like it. Could be a great name for a hipster hang out. The kids will love it.’ Trump walks back the limo. ‘I’ll get my people to find somewhere for you. Maybe Williamsburg. Trust me’.

As the limo drives off into the darkness, Trump looks back at the crossroads, but Lenin had already gone. 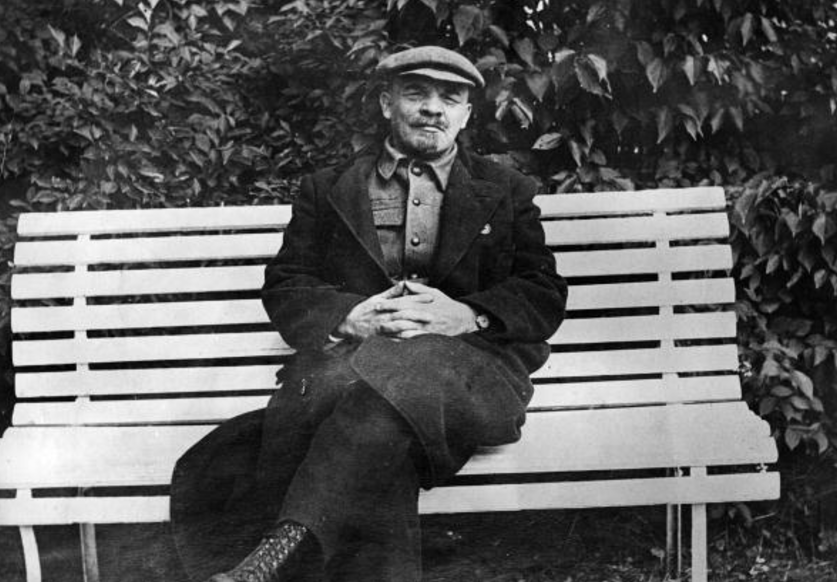 HERBERT WRIGHT is a London-based author and journalist specializing in architecture and art, and Editor-at-Large of The Journal of Wild Culture. He studied physics and astrophysics at the University of London. He is currently a contributing editor of Blueprint magazine and is published extensively elsewhere.

Trump at the Crossroads gets advice from the other Vladimir
The Politics of Resentment in Trump's America
Shoveling Out the Dregs of Neoliberalism: A Crash Course by George Monbiot
Democracies in Exile: A Blueprint for Dangerous Times
How the Right to Assembly Gets Fudged

Democracies in Exile: A Blueprint for Dangerous Times
The Politics of Resentment in Trump's America
What Came Down in Bolivia: A Citizen's Report
How the Right to Assembly Gets Fudged
A Revolutionary Moment: Morsels of Insight from Chris Hedges' Wages of Rebellion