Category
Art & Aesthetics
Health & Healing
Borders & Crossings
NOK&T: The Last Project
by Nok and T , CC O'Hanlon
Published: Jan 21, 2018
Standfirst
A well-favoured art duo, NOK&T, have bravely spanned the realms of artistic invention and gruelling memory. From October of last year to today, they brought us inside an illuminating private battle that began with a diagnosis of NOK's terminal illness. This is a chronicle of those final months. With an introduction by CC O'Hanlon.
Body

Nok and Treesje. a self-portrait.

I wrote these first lines of an unfinished poem on the morning after my friend, the Dutch artist Nok Snel, had been told by a doctor in Amsterdam that she was dying. I was trying to express the deep sadness and selfish anger that roiled inside me. As Nok’s health deteriorates, I am still trying to come to terms with them. I hate that she is dying so young. I don’t want to feel the pain of missing her.

Nok and I haven't known each other long. I had come across her work with Treesje Bannenberg, the other half of the art duo better known as NOK&T, in 2008. But it wasn’t until late 2014 that the two women and I began an informal correspondence that grew into a close friendship. We exchange emails, some quite long, two or three times a week, as well as books and small works of art. But even though we live relatively close to each other (they in a small village not far from Reims in France, and I in Berlin), we have never met. It is a peculiarly 21st century friendship: intimate, sharing, supportive, but remote. I value it greatly.

I had always known Nok had had breast cancer but, like Nok and Treesje themselves, I thought that she had beaten it. In all the photos they’ve shared with me, Nok has looked strong — defiant even — never frail, her lean body (often naked) like that of a well-trained fighter. Then, in August 2015, while at home in rural northern France, she became very ill. A fraught three weeks of tests in Amsterdam, during which Treesje sent me updates nearly every evening, revealed more cancer. It had already metastasised. No further treatment was possible. Nok and Treesje returned to their much-loved cottage in France.

Nok is coming to terms with the end of her life, not with self-pity but with a heightened awareness of everything around her . . .

The relationship between Nok and Treesje is — as it always has been — intense but indelible. They themselves have written about it intimately and very movingly within an extended piece published by The Journal of Wild Culture just a few months ago. I won’t attempt to add my own perspective: they have described with discomforting honesty how the relationship was born from the sheer will to overcome troubled lives and to move forward, with each others’ support, to survive and thrive. This is what makes Nok’s illness so heart-rending: she should survive this, I keep telling myself, even though I know there isn’t a chance of that.

The first of their films arrived by email to me a few weeks ago. The subject line read ‘the last project’, all lower case. There was no further explanation. The ‘message' of the film, and the half a dozen films that have followed it — each of them short, unfussy, and with little narration — is achingly simple: Nok is coming to terms with the end of her life, acknowledging it as it draws ever nearer not with self-pity but with a heightened awareness of everything around her, and at the same time creating space in which her (and Treesje’s) emotional and creative combustion — sadness, regret, frustration, fear, relief, anger, whatever — can be released.

There is a lot of material in Nok’s life from which a writer might construct a grander epitaph, but that was never Nok’s style. These short films, created with Treesje, are a direct connection to the woman’s own heart and imagination as she continues to live, and die, as an artist in public. I cried when I received the first one but I’ve received all the ones that followed with happiness.

This is the enviable power of Nok and Treesje — to turn anger and grief into joy, and an inevitable sense of loss into life-affirming renewal.

Although she loves moisture very much, Nok voluntarily left 1.1 liter of pleural-fluid in the OLVG hospital in Amsterdam. That gave her some air in the love. But the blow back from the surgery is harrowing . . .

November 27 — Yesterday it was very misty and it froze a little. Nok gasped: "That's how I feel . . . like onion rings on barbed wire!"

(This photograph is of threads of cow hair caught on the fence that have been coated with moisture and frozen.) 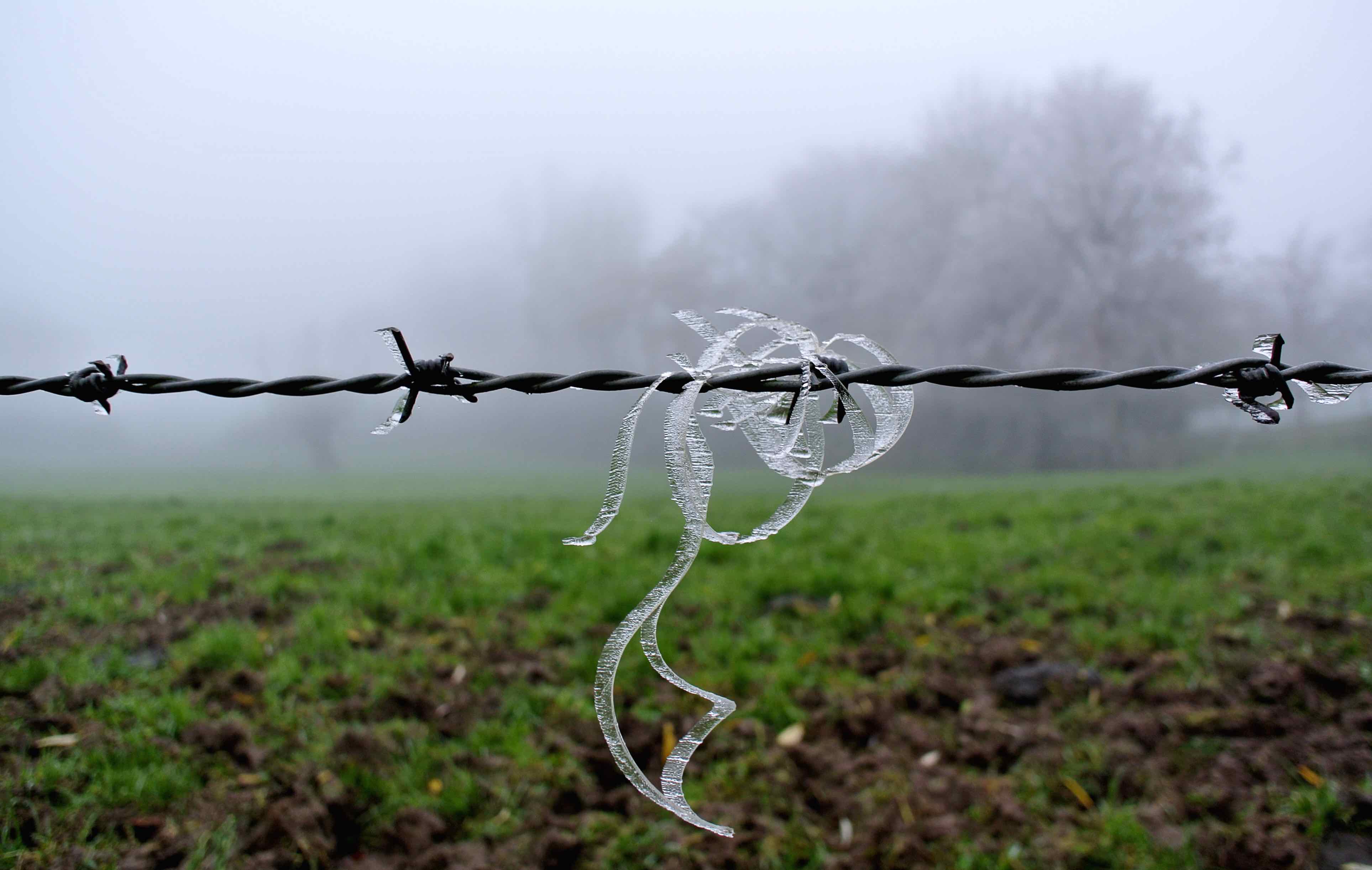 Sunday we have to go back to Amsterdam. If Nok is well and strong enough, she will have an operation. The lung specialist will put a draining pipe inside her so, hopefully, she won't have to travel anymore and can stay in France until the end.

On Monday, as we are in and out the hospital for that week, my mother will be buried. If you remember our interview and my relationship with having no mom at all, and having a very sick beloved one with me (Nok), the message hasn't hit me. I fought for about 50 years to get a connection with my seven brothers and sisters, and for them to understand my situation and relationship with my mother. They now accept our abscence.

For us and our minds, it's actually a lot to go through. Nok and I are very tired, but we will go on forever.

It's snowing over here. It's very beautiful but we have little connection with the outside.

February 11 — We are back home in France! After the operation, drainings, infusions, injections, treatment of rib fractures by bone metatstasis, and a collapsed lung we were discharged from the hospital. It took much longer than planned to extend Nok's life in a qualitative way as long as possible, and though it doesn't sound like it, her mission was successful.

The oncologist, who is amazed how strong she is thinking of already winning life the last 5 months, has prescribed a hormone treatment. On the question of how long Nok will live, he said 'two weeks up to a year". Nok is very tired, but so am I, but slowly and surely she’s back on her famous long legs.

March 15 — This week Nok has been hospitalized in Rethel, France. An emergency. She almost suffocated. We are back home but still running in this bad rollercoaster. Right now we are too tired and confused to share all the shit. Maybe next time.

After a week of no networking we are offering this postcard.

March 25 — HELP! At 3:30 AM I hear a hoarse cry. I run downstairs. Nok sits on the edge of the bed gasping for breath. She has had it. She is suffocating. What more can we do? The doctor was there yesterday. Everything has already been done. Nok can not lie down anymore. She is coughing her lungs out of her body. She has pain everywhere, especially in the back and in her swollen belly. Maybe it's better to sit higher, I ask? Holding my arm, Nok shuffles into the living room and falls down on a chair. She takes pills to deal with the attack pains while I start the wood stove. It's no use. The pains are unbearable and the cough is worse. She can barely talk. She whispers urgently for more pills. Soon the cough gets better and so does the pain. With her eyes slightly open she smiles at me. Huh huh, that's a relief . . . Finally, I feel nothing. Are you comfortable, I ask? Yes, lovely! Are you warm enough? “Oh yeah, just throw a block of wood in the stove and feed the dogs,” are Nok's very last caring words. She falls into a deep sleep. For hours I hug her, kiss her face and hands. Touching her has not been possible lately. Too painful. She now snores softly. Sometimes it takes a long time before she breathes again. I hardly dare to leave her. Oh, Nok, I love you so! Two thick tears fill the corners of her eyes.

On 'Good' Friday the 25th of March, 2016, at 12:18 PM, Nok dies in her sleep in our little paradise in France. But fearless and courageous Nok will definitely not resurrect. She said to me once, “Death is dead.”

April 4 — Nok is cremated in a private ceremony in Amsterdam.

View NOK&T's first article in The Journal of Wild Culture, 'Love and Art in Healing.'

This article first appeared in The Journal of Wild Culture, October 4, 2016

NOK&T: Love and art in healing
NOK&T: The Last Project, Part 3
On closeness and leaving
At Subtle Technologies 20: Expanding Empathy & Emotional Ecologies
Fighting the Sun for Sport: The Finish