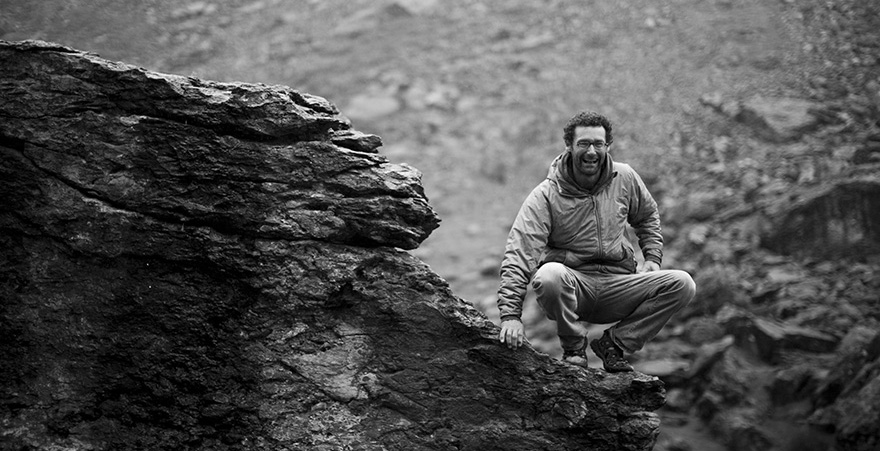 LONDON — There is a decision to make: to carry on to the top or to walk away. The clouds are building around the side of the Alaskan mountain and to continue climbing could prove fatal. It would be easier to turn around and head back, to maybe try again another time when the weather looks safer. But memories of an old life keep surfacing, memories that taunt the notion of retreat, of heading down to comforts and stability. Walking away can be hard.

I’m talking with Nick Bullock, Britain’s top mountaineer and certainly one of the sport's more dedicated characters. I meet Bullock at my father’s house on the steep slopes of Cefn Ddu in north Wales. The two of them are old friends, having climbed all over the world together, and it's a struggle to get the interview started; though they're no spring chickens, when together they're giddy as school kids.

In addition, Bullock tells us that he can’t stay long as he wants to sneak in a quick run up the valleys before heading back to the hut. He doesn’t have a home so when not abroad he divides his time between sleeping in a van, in mountain huts or house sitting for people in the area. His lifestyle is far from luxurious, but that is a conscious choice. He is a transient; focused only on the next journey.

Whilst it is hard to imagine now, as he sits there in an oversized hoody with his scruffy mop of hair, Bullock spent much of his life working as a prison officer in some of Britain’s worst institutions, locked in a world of routine violence.

Life expectancy for a prison officer is just 59 years compared with the national average of 77.

The prison service is renowned both for alcoholism and a high turnover of personnel. When my dad leaves the room, Bullock begins to talk about life before climbing. He describes his time in the industry as a non-existence; everything a grim routine of door locking and lights out. Even vicious brawls with inmates gradually became absurdly mundane. When you consider the hostility of the environment, the endless aggression, the fact that officers are responsible for the mental and physical restriction of others, it's unsurprising that depression is so abnormally high. In America the average life expectancy for a prison officer is just 59 years compared with the national average of 77.

Even outside such a system, for Bullock life seemed to have been mapped out in advance: “You grow up, you have a mortgage, you meet a wife, you have children, you have a dog, you have a Ford Escort, you retire at 60 and you die.” This was what was expected, this is just what you did. “My whole life was this path,” he explains, “and then I found climbing. I gave up £25,000 a year and a house and just went out into the wilderness.” In 2003 Bullock abandoned his life and became a full time, homeless climber.

Bullock quickly built up a reputation as an extremely bold climber, attempting some of the most dangerous routes and peaks in the world. His time in the prison service had clearly flicked a switch in his head.

As you might expect, this audacious approach to life has placed him in some fairly perilous situations. On one recent trip he got caught out by a shift in weather half way up The Slovak, a notoriously hard route on Denali, the tallest peak in North America. Even during the hottest part of the year, temperatures can drop to as low as -50° C. Bullock grins as he tells me how the snow and wind were so bad that they couldn’t even get the tent up: “We had no food left and were pretty strung out. We’re both lying there thinking, well this could be interesting.”

Such experiences aren't for everybody, but for Bullock, this is life at its brilliant best: “I love crossing the boundaries in my mind...trying to combat the inner voices.”

The big peaks have certainly tested Bullock, but it was on the shores of Britain that Nick’s biggest psychological battle occurred. This particular episode took place above the Irish sea and was really all about a cruel beauty called Melody. On the Llyn peninsula of North Wales, stands a highly unstable shale cliff. Up the steep central left is a route known as Melody. “People won’t believe you because it’s pretty difficult to understand how you’d climb this rock,” Bullock says. “You grab hold of it and it just rips off in your hands.” The rock’s consistency is similar to that of sand and gravel, and should you fall off the bottom section, the only safety gear is a few rusty pegs that are liable to break.

Bullock instantly fell in love with the route. “You probably shouldn’t fall off climbs like this,” he laughs. “And I fell off.” He flails his arms around, miming the terror he felt: “both my handholds ripped off from near the top of the cliff and I fell about 50 feet onto a hand-placed peg and the smallest camming device on the market.” In his hands he fiddles with a piece of safety equipment no bigger in diameter than a finger nail. This is the cam that saved his life.

Bullock tried to let the project go but it kept returning to him, growing in the back of his mind, becoming a psychological war like he had never faced before. He shrugs, “I was never very good at not confronting my demons.”

He left Melody alone for almost a year, but the urge to go back grew stronger. He spent weeks deliberating about whether to return, many nights spent alone in the dark, a bottle of wine never far away. His friends told me that he was like a different person in this period. There was a seriousness to him that was not usually there. He was becoming intolerant and reclusive, drawing within himself, becoming consumed.

In September 2011, Bullock and my father drove out to the Llyn once again. With the car bouncing along the country road and Johnny Cash blasting out the radio, these two old timers prepared, once again, to lay it all on the line. Men mean business when they're listening to the Cash.

He has managed to transcend the social fears that debilitated him for so long.

When Bullock talks of Melody now, you get the sense that he needed to do this one, that this one was worth it. By turning to Melody, he may have risked his life, but in prevailing, he was somehow saving it.

Climbing, then, has offered Bullock an escape, but there have been sacrifices. In order to justify the risks he has had to keep a degree of separation around himself: “you couldn’t accuse me of being selfish because I’ve gone out of my way not to get a family and children . . . because you could quite easily die and it would be unfair to put them through that.”

For him this sacrifice is worth it. Climbing has brought him a sense of purpose and meaning. It has offered a freedom from social restraints, from routine. By overcoming the primal fear of death, Bullock has managed to transcend the social fears that debilitated him for so long. As he's written on his blog: “It’s cheaper for the government if we are all squeaky clean and we all have mortgages. This makes us all live in fear and become beholders to the powers that be.”

It is amusing to hear a man who risks his life on a day-to-day basis terrified of the commonplace in this way. Security is found, for most people, in a home and through a regular income, but Bullock cites these as his biggest fears. There's an irony here and it’s not lost on him either. His life is only one step away from being an FDR quotation.

LIAM DESROY is a former assistant editor of The Journal of Wild Culture. He is currently the Editor of Science Prophet and the Creative Manager at Crocotta R&D Ltd.

Nick Bullock is sponsored by DMM climbing equipment, and is the author of Echoes.

This article first appeared in The Journal of Wild Culture in December 11, 2012.

Truly inspiring for me to read this. Amazing .

Great read, will recommend to others

Bang on the money, Desroy.

Suppose you have an interview in a few days. Have you seen how you fear it even before going for it?

On the contrary, when you are hanging out with a bunch of friends, you are very comfortable and natural. Being natural is an antidote to ego, and regular practice of meditation brings you back to your nature. It makes you natural. Imagine what would happen if people had no fear at all? If students had absolutely no fear of failure — would they study? If you had no fear of falling sick, would you take care of your health? So be wise and acknowledge the usefulness of having a little fear in you.