Waiting for the Debris Flows

Waiting for the Debris Flows
by John Davis
Published: Mar 25, 2018
Standfirst
Wouldn't it be nice for it to go away, this noise in our quotidian lives? Like hapless children unable to extricate ourselves from dissension in the household, the quarrel nature is having with civilization in the form of weather is our quarrel, too, like it or not. In these pages it's our job to present those who can speak with eloquent insistence about what we are in the middle of, and what is, we assume, to come. John Davis offers a lucid cri de coeur fuelled by the presence of looming danger at his doorstep in California.
Body

In J.M. Coetzee's 1980 novel, Waiting for the Barbarians, his characters sit around in an isolated colonial fort in a nameless desert country, awaiting their destiny — an invasion of the barbarians. The novel concerns its characters’ slow realization of their complicity, as agents of the Empire, in their fate. Something very similar is happening here on the eastern fringe of southern California's Thomas Fire burn area as we await the rains and the debris flows that will surely follow — as they did, earlier in the year, with such devastating results in Montecito, further to the west.

This analogy, to fully flower, depends on two things. The first is that the fire was intensified by global warming. It came, early in December, after six years of drought, towards the end of a dry first half of the rainy season and in the midst of northeast Santa Ana winds of unprecedented intensity. The second is that we are both culpable and complicit in the first by the fact of our living in a society driven by the burning of fossil fuels, and implicit is the connection between the two.

The motley assortment of ex-pats who populate Coetzee's desert fort have more reason to debate the benefits, or provocations, of their colonial mission impacting the peoples they have (we presume) earlier displaced. Although they too — even without the benefit of a course in post-colonial studies — come to accept their role in the disruption of a pre-existing social ecology and the acts of revenge this will ultimately generate. They sit and wait for an invasion by the people who, by destroying their world, they have made into barbarians.

The Progress of This Storm is a bleakly realist analysis of our current climate predicament.

Meanwhile, in the now certified fire-safe house we live in (but still surely vulnerable to debris flows) situated in the wildland-urban-interface, we sit and wait for other acts of weather terrorism provoked by the Empire's eviscerations of the earth's crust. So, the world ends not with a bang but with the weather.

Not with a thermonuclear Armageddon, but with the slow melting of glacial ice and the creeping scourge of drought. With top soil blowing lazily away, with trees stressed and stricken by lightning, with the soft lap of flood water, with the low buzz of disease carrying mosquitos that follow. With the almost imperceptible warming of the oceans and their swelling, with their perturbation of the air into a violent cyclogenesis and with their slowly increasing acidification.

The world ends with a fulsome wetness, with debris flows and a coruscating dryness, with extreme heat, fire storms, chilling polar cold, high pressures and lows and the violent winds that are whipped between them; it ends with incursions, as Andreas Malm frames it, into "the killing fields of extreme weather". Malm is the author of Fossil Capital — The Rise of Steam Power and the Roots of Global Warming (2016), a historical review of the death-spiral, co-dependence of Capitalism and the Earth's buried, necrotic energy deposits; and most recently, of The Progress of This Storm — Nature and Society in a Warming World (2018), a critique of post-Latourian ecological theory [re: French philosopher, Bruno Latour] and a bleakly realist analysis of our current climate predicament.

"It will ultimately choke the accumulation of capital — long after it has killed those at the greatest distance from the bourgeoisie". [o]

Even now, in the global north, well into the new century of warming, this stormy weather rarely rises to a level of noticeable sound and fury, or causes death and destruction in concentrated and therefore newsworthy numbers, although the bar is set low. Most recently, in the fall of 2017, fires in Northern California caused 10,000 homes to be destroyed, with 48 dead — which translated into big news. Southern California’s largest wild fire followed at the end of the year and then the related and much more deadly Montecito mudslide (now officially termed a debris flow) began the New Year, helped along in newsworthiness by the frisson of celebrity’s homes being endangered. Back in 2010, floods in Pakistan displaced 10 million people and killed 2,000. As Malm writes, "climate change will ultimately choke the accumulation of capital — long after it has killed those at the greatest distance from the bourgeoisie". In the United States, the passing of our planet as a viable home for us teeming billions (and so many other species) will be slow and mostly unheralded. That process (along with its commonplace denial) has, of course, already begun.

Timothy Morton (a noted post-Latourian ‘dark ecologist’ lambasted by Malm) suggests, “It is helpful to think of global warming as something like an ultra-slow-motion nuclear bomb." Thinking this way elucidates what emergency services are trained to do. They function now as officialdom’s most visible interface with global warming, our legislatures, at all levels, being largely missing in action. In Morton’s metaphor, they help you evacuate ground zero after an explosion, but then facilitate your earliest return back to your irradiated home where you will be doomed to experience similar detonations until your location becomes untenable. Except that your choices narrow with each extreme weather event and the efficacy of emergency services slowly erodes with the attenuation of their budgetary resources. We do not yet understand their resilience, but it will surely soon be tested.

Despite the militaristic planning, equipment battalions and fleets of National Guard, Coast Guard and local law-enforcement helicopters, fixed wing aircraft and drones, this is not a ‘War on Weather’ — and even less a concerted attack on the cause of its terroristic inclinations, the blowback from ever increasing global CO2 emissions. The work of emergency services, combining regional fire and police services alongside of the Red Cross and Federal agencies such as FEMA remains, however, the most credible response this country makes to the issues of global warming. In California, and across the US, their work initiates a series of Dunkirks endlessly replayed in aggregations of private cars, trucks, SUV’s and minivans on freeways that once were meant to save us from the Red Menace, but that now serve as conduits of mandated evacuations to anywhere or nowhere.

If we stopped the 32 million cars and said you can’t use oil, the whole economy would collapse. You’d have a revolution.

California, highly vulnerable to drought, wind-driven wild fires, rising sea-levels, floods, and debris flows has a Governor who talks tough but is confounded by ‘business as usual’ — and receives Malm’s damning evocation of a status quo in service to the hegemonic and carbon spewing power elites. Speaking in Bonn at COP23 last November, Brown conceded that “if we stopped the 32 million cars and said you can’t use oil, the whole economy would collapse. You’d have a revolution. There’d be shooting in the streets — and you couldn’t do that and no one would do that…..This (oil) is a very embedded industry and we need a very sophisticated response to minimize it….but it’s a part of a bigger picture. And gestures are not helpful, we need strategies and action”.

And indeed, the Governor has a plan which includes the usual bag of green tricks — renewable energy, efficient buildings, a cap-and-trade system, and a low carbon fuel standard. But even were California to become a zero CO2 emitting state, that would not mitigate its far larger role in global warming as a consumer of goods manufactured in Asia where, as Malm has it, China has become the ‘chimney of the world’ driven by globally mobile capital lured by a tractable, cheap labor supply in factories energized, for the most part, by massive consumption of fossil energy. California does its deleterious part both in consumption of such goods and as a cultural avatar which proclaims such levels of consumption as an aspirational goal for the rest of the world.

How does this end? Not well. The whimper you may hear will be the last gasp of the great mass of an oppressed citizenry under the command of a highly militarized corps of emergency services pursuing a sincere desire to assist in the human and property tolls of weather terrorism — which ultimately threatens to tear apart a society whose government is dedicated to the protection of that class of elite citizens most culpable in the production of its cause. 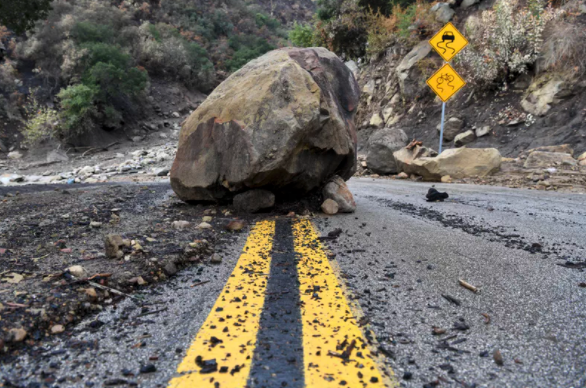 A large boulder sits in the middle of a road in Montecito, California following a rain storm, Jan. 9, 2018. (Michael Owen Baker/AP)

The US has adopted ‘Fossil Capital’ as its national ethos. (‘Drill baby, drill.’) It has been a part of the country's ideological infrastructure for at least a century and a half. The US also performs highly effective hierarchical command and control, a trait forged when it was a colonial outpost in the New World under constant threat from the indigenous peoples it re-cast as barbarians. The US institutes heroic large-scale, technologically and logistically intense bravura acts of intervention (world wars and space exploration); but it is constitutionally ill-suited to take the steps necessary to contain the temperature rise inherent in the continued burning of fossil fuels (to the extent that the US remains relevant to this effort).

We can therefore expect increased militarization of federal, state and local emergency services battling the blowback from global warming, and an increased focus on geo-engineering solutions to mitigate solar radiation, a strategy backed by some of the world’s richest men, including Bill Gates — all desperate to preserve the formula for added exchange value derived from the earth's store of prehistoric solar energy.

We should not expect rescue. So we sit and wait, knowing that the invasion has begun. As the rain falls (or not), the wind howls, the cold bites, the sun scorches, the wild fires rage and the debris flows, we are all under voluntary evacuation orders — but there is absolutely nowhere to go. ≈©