Category
Prose, Poetry & Poetics
Intimacy
Suffering & Violence
Gifts of lurking pain: 6 poems by Allen Braden
by Allen Braden
Published: Feb 10, 2018
Standfirst
Allen Braden invites us to join in following the threads of consciousness he finds along the way, in the human and the non-human. There is a generous strictness to patterns in Braden's music, and one example is the recurring bass line of lurking pain in the passive observer: the witness who spies an aching pulse in others, or feels it themselves within.
Body

for a hollow to lie in where they fit perfectly
the way their perfect bodies fit one another.

It seems quite natural that he is the star
this season and she the head cheerleader.

Once or twice she recalls something else
unforgettable she wants to say but does not.

They touch as if to say, Don’t ever forget this,
are young enough to wring love from elegy

with the vertigo of their longing, the rush
of uncovering and pushing flesh against flesh.

One tiny act is all it takes to bury themselves
in some small excuse for somewhere else,

and hers will be spent waiting on tables
with trays of coffee, hot cakes and syrup. 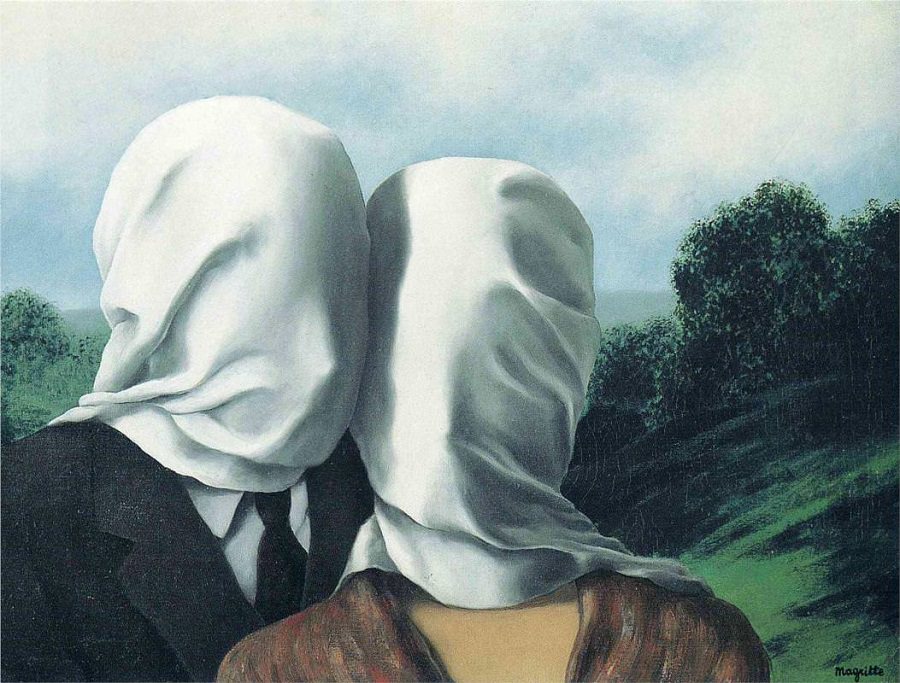 REMEMBERING PRECIOUS LANDSCAPE, BUT WITH AN ELEGY IN MIND

Nevertheless the front yard, even the hawthorn,
flourished. Various roses built a windbreak,
all the catalpa petals splayed themselves open
and pollen splotched the limbs in gold profusion.

Suppose a woman lived there, a young wife,
her tanned arms dappled from whitewashing,
beautifying the wagon-wheel fence assembled
out of last century’s rumbling west for a better life.

Say years later, while kneeling in her rose and iris bed,
she happened to gaze toward the east forty
and witness the men in her family, at a distance,
circling and swinging their long-handled shovels.

They could’ve been mistaken, a hundred years earlier,
for threshers slapping chaff from the harvest.
They were in fact clubbing a wounded badger,
winnowing its blood into the furrows of stubble.

Now suppose that the iris have grown
wooden, their blues and lavenders blackened.
Razed down to the quick, her roses
promise to return. Prolific. Invasive.

A favorite of bumblebees
but hell on earth for her husband,
it had a humbleness she loved

and she stroked the tassel’s velvet
wherever he figured clods or weeds.
He knew only the bite of its bristle,

uprooting them by the hundreds
and slapping their stubborn roots bare
to ensure gradual death in the light.

They’ll eat up the crop
and be the undoing of us both.
Can’t she see that?

Once, she had hoped to marry
a man whose name was spread
clear across the horizon

where the strands of fence wire
stapled to every lonesome post
strummed like dulcimers by the wind,

a breeze that broadcast so easily
the white secrets of thistle seed
and might deliver her out of here. 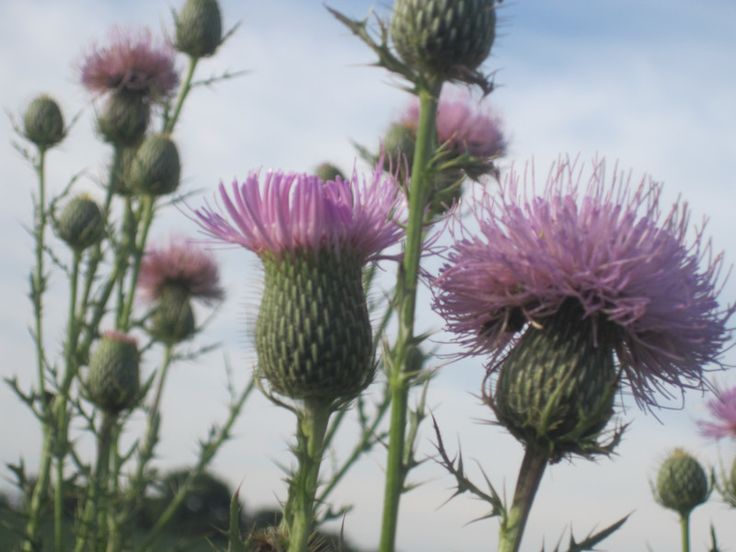 Cirsium vulgare (bull thistle, common thistle, or spear thistle) is listed as a noxious weed in nine US states. [o

The barber says he never did love her
without ever using that word.
Behind a stripe screwing up the pole as if by magic,
his scissors lisp bitch bitch bitch.
My father and the other married men,
some for the second or third time,
nod and pocket their fists.
The clipper strips my eight-year-old skull
until it’s stubbled as a new beard.
Over the grrrs of the razor
he tells them—no—tells us the lies
she bewitched the court with,
the demands she put on him.

Once his work is done
I bristle like a man’s supposed to,
step down and take my father’s seat.
The curls of hair drift to the floor.
Snapping his sheet for us
like a magician’s cape,
our man is ready
to close and perform his story
for happy hour next door.
Father pays up. He’ll go home,
even though the chores are done.
He’ll take me back to his wife
and try hard for the right words. 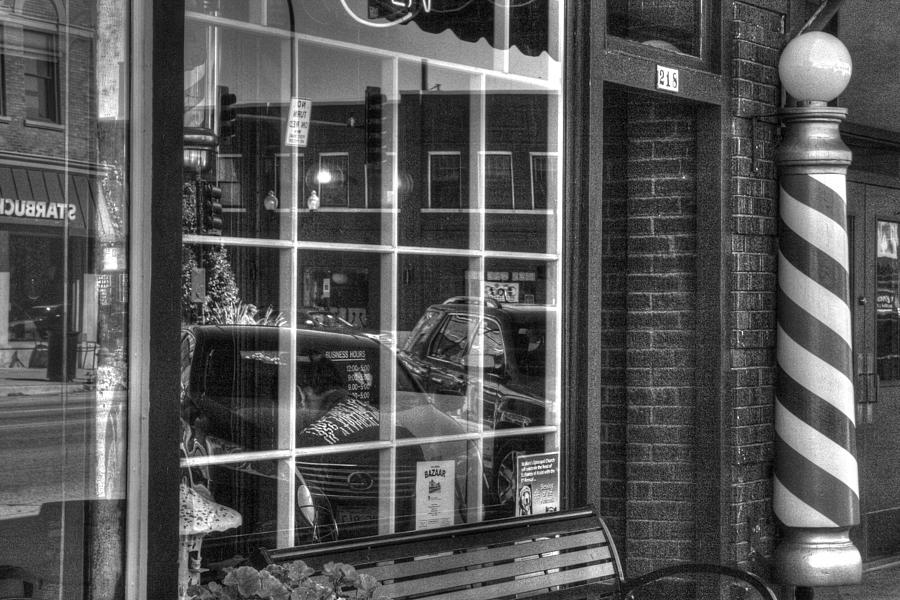 In his bleary memory she poses
like an immaculate mannequin,
her eyes pimentos, joints frozen
in a gesture he’s grown to know.

Loss is like a bluebottle fly
buzzing around in a mug of bourbon.
She’ll come back. Any minute,
he keeps telling himself.

One day pours into the next
but he can still see her.
A dark square nailed to the wall.
A portrait taken down for good.

IN THE GREASE ROOM'S DARK

and rough pine planks that sag
under cans of every kind of paint
failing to approximate a rainbow,

where the top shelf’s a stash
of Hustlers and Playboys,
the chew roll of Copenhagen)

a single valentine from the drugstore
is hidden, with not a smudge
of grease or dirt on it.

Would it be hyperbole then
to say turpentine and thinner
perfume the air;

say the cobwebs
are like costume jewelry
accessorizing the beams and rafters;

Even the dead flies
and drops of oil spilt from drums
glitter in the weak and dirty light.

Not sure what’s my first but an early one is wanting to bring the stones in our yard inside the house so they would stay warm and dry before a rainstorm. It tells me I’m in love with nature.

2   Can you name a handful of artists in your field, or other fields, who have influenced you — who come to mind immediately?

3   Where did you grow up, and did that place and your experience of it help form your sense about place and the environment in general?

I grew up on a farm and cattle ranch of over 200 acres. Each season brought a different routine of work: calving, milking, feeding, bucking, pitching, shovelling, planting, irrigating, sorting, herding, fencing, vaccinating, castrating, dehorning, healing, harvesting, stacking, auguring, sacking, butchering. All this taught me many things, but what occurs to me just now is how much of our actions were prevention or response to the weather.  Good weather meant growing and pasturing; bad meant corralling and pitching hay morning and evening.

4   If you were going away on a very long journey and you could only take four books — one poetry, one fiction, one non-fiction, one literary criticism  — what would they be?

6   At one point did you discover your ability with poetry?

Still waiting for that discovery.

7   Do you have an ‘engine’ that drives your artistic practice, and if so, can you comment on it?

When I wrote genre fiction as a teenager, details of a story would grow and the only way to clear my head would be to write it down. It’s similar with poetry but connects with more urge than thought, a building under my ribs rather than in my brain.

8   If you were to meet a person who seriously wants to do work in your field — someone who admires and resonates with the type of work you do, and they clearly have real talent — and they asked you for some general advice, what would that be?

Read more than you write.

9   Do you have a current question or preoccupation that you could share with us?

Will poetry survive the 21st century?

Maybe because of my background, or because I volunteer for Terrain.org, when I hear “wild” I immediately think of untamed settings: deep forests of sword fern and Douglas firs, deserts of ocotillo, snakes and mesas, ocean with nothing but waves in every direction. When I hear “culture,” I think of literature. So wild culture is the packaging of human written responses to the other — the nonhuman factors around us.

11   If you would like to ask yourself a final question, what would it be?

What any artist secretly asks. Will my poetry survive the 21st century?

ALLEN BRADEN's work has been published in The New Republic, Prairie Schooner, Virginia Quarterly Review, Shenandoah, Southern Review, and Georgia Review. He was poet-in-residence for the Poetry Center and the School of the Art Institute of Chicago, and now teaches at Tacoma Community College. Allen’s poem “Your Cheating Heart” won the third prize in the 2017 Times Literary Supplement/Mick Imlah Poetry Prize. He lives in Tacoma, Washington.

All poems here were previously published in Elegy in the Passive Voice (University of Alaska/Fairbanks).

Allen was a student of mine

Allen was a student of mine

Allen was a student of mine when I taught high school English. In my many years of teaching he was one of the most gifted writers I have encountered! I am so proud of him, and of course I so enjoy reading his poetry.

Thank you JWC for introducing

Thank you JWC for introducing

Thank you JWC for introducing me to yet another fine poet. I especially like the Q and A, which really amplifies my appreciation of the poetry.

Years ago I was in a critique

Years ago I was in a critique

Years ago I was in a critique group with Allen. He is one reason I have contributed with poetry thoughout my life.

"Every handsome post / stroked like dulcimers by the wind." That
says it all. Allen has a beautiful touch with a metaphor that carries
all the way through a poem to the end. This group of highly personal
elegies is a sounding board for a particular lyric voice . . . that makes me think of Auden. Something "universal."

Yes, Allen, your poetry will

Yes, Allen, your poetry will

Yes, Allen, your poetry will survive the 21st century.

Always moving and thought provoking. Each poem takes us on a journey that when finished the reader comes through with a different view. Bravo!

Gifts of lurking pain: 6 poems by Allen Braden
Poems from an earlier #MeToo
The Suitcase, Ode To a Lover on the Susquehanna, Night Trek
Three poems: 'Notice', 'Guest Room in Toile', 'Dream of the Ink Blue Parlor'
The Storms That Blow Through Us: Three Poems by Adeline Fecker

Poems from an earlier #MeToo
The Suitcase, Ode To a Lover on the Susquehanna, Night Trek
The Storms That Blow Through Us: Three Poems by Adeline Fecker
Three poems: 'Notice', 'Guest Room in Toile', 'Dream of the Ink Blue Parlor'
'Be Careful What You Wish For,' plus some . . .