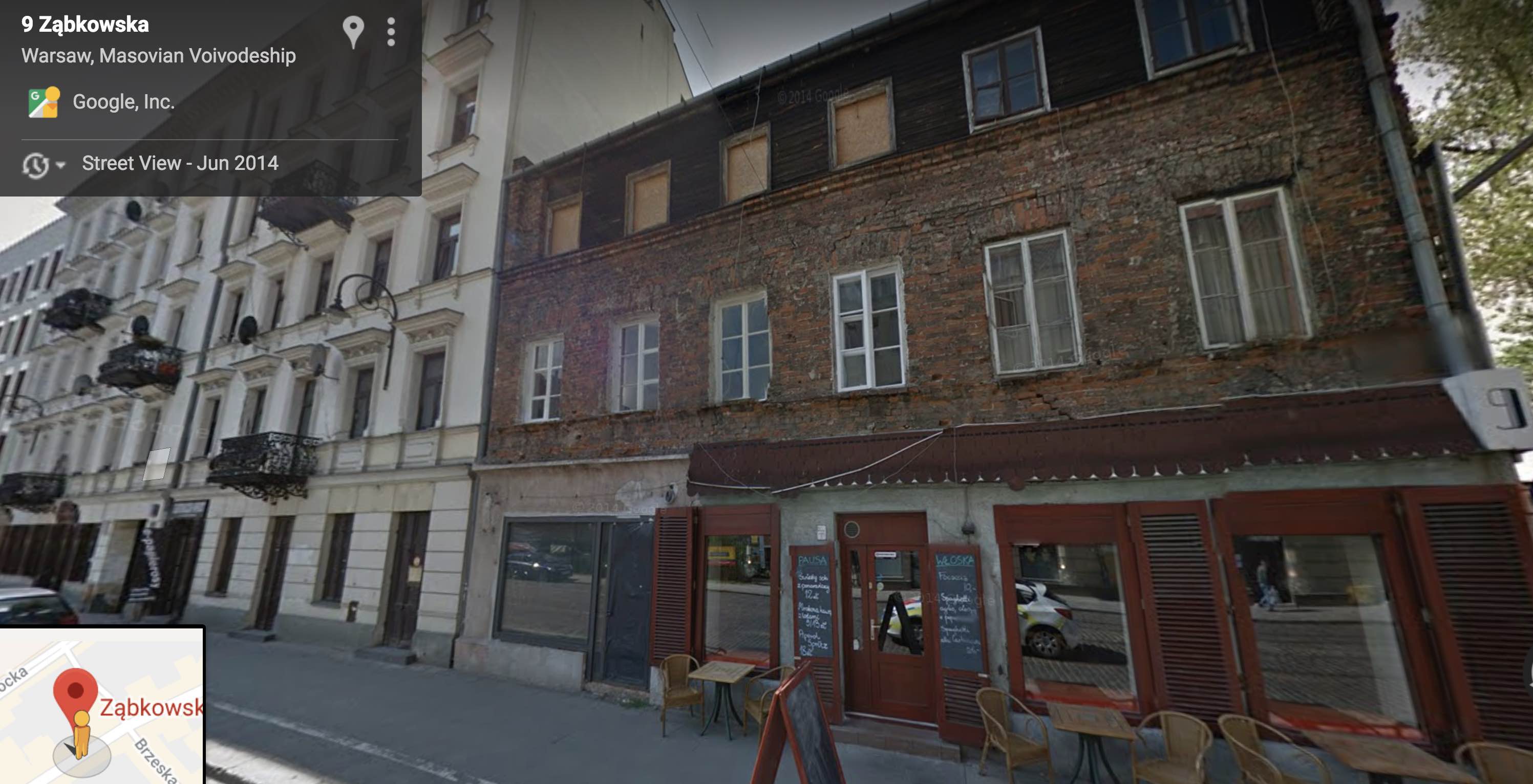 We’ve all experienced that moment when we pass a recently vacant lot, snap our fingers, and struggle to remember what was there. We sputter, as if to spit out a word stuck at the tip of our tongue, it’ll come back to me.

Piotr Janowski is an artist who senses time shifting before the rest of us do. As a result, he wants to give the ordinary dreams of past generations one last voice before they fade into the static of an old recording. One of the ways he acts on this impulse is to use aluminum foil to seize that moment just before our three-dimensional cityscape vanishes into memory.

In September 2018, this Polish-born painter, sculptor, conceptual artist and graduate of the Art Institute of Chicago cast his reflections on Zabkowska 9, an 1870 tenement building in Warsaw. It had survived two world wars and remains standing in undesirable Praga-Północ — a district with a sketchy reputation that stems from drug dealers, addicts and alcoholics loitering on its streets. Praga-Północ is now being rediscovered. Janowski compares it to Brooklyn before gentrification.

I had a major crisis. Physically and emotionally, I asked myself could I finish this?

A vagrant, whose face is etched with the deep lines of a hard life, Wiesław Gołąb, confronted the artist and offered to “introduce” him to the neighborhood.

In the early stages of the foiling process, the unexpected happened. They bonded as they worked side by side. Gołąb soon became Janowski’s trusted assistant and bodyguard. In the following few weeks, the drifter transformed himself. Despite being slightly drunk, he was punctual and worked long days. In addition, the restaurant beneath the abandoned tenement hired him for odd jobs and paid him in room and board. Even if a travel website advise tourists to avoid visiting there, the building is charming for locals who sit beneath the festive yellow umbrellas and sip coffee.

It was the helper’s good fortune to be lingering near a building that caught Janowski’s eye. He became part of the gravitational pull of the commonplace. The tenement fit the artist’s manifesto to literally highlight the past before it becomes the past. Janowski wants us to remember our connections, our ties to place through our homes, even if it’s only a temporary home in a tenement. 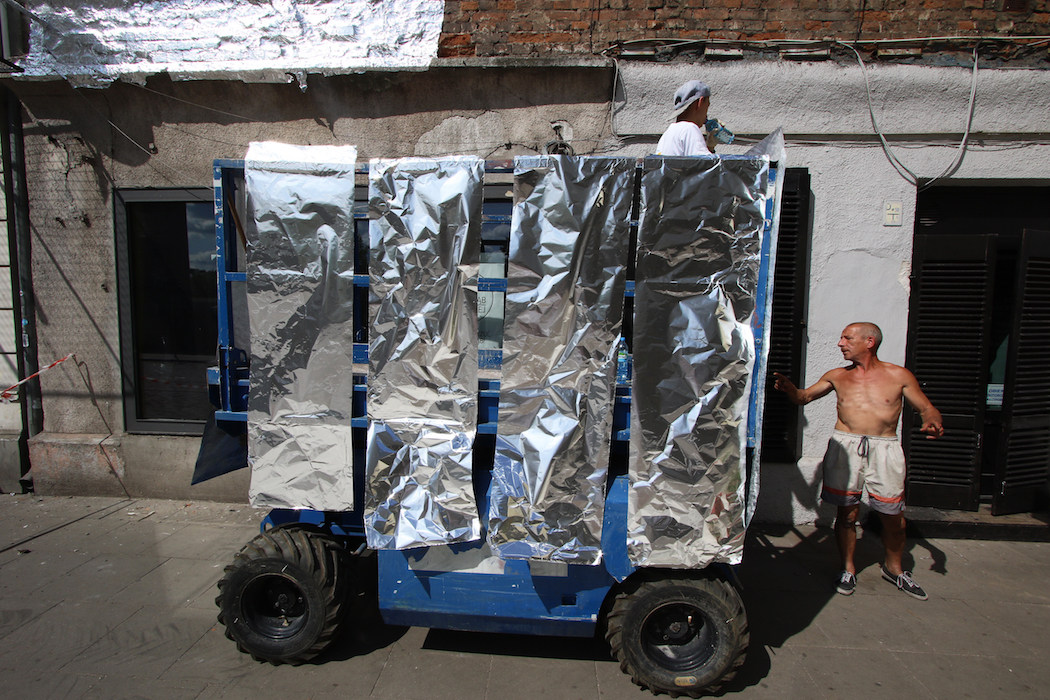 “Buildings are time markers," he says, steering the conversation back to the public square. "They’re in our space.”

He knows Beaux Arts buildings are festooned in grandeur and that the filigree attracts the preservationist eye. But Janowski has a soft spot for the girl next door when it comes to architecture. He wants to dress up its ordinary bricks and mortar like a debutante for her coming-out party. When Janowski saw Zabkowska 9, he knew she was the one — and that what two wars could not destroy modernization probably will.

Feeling the spirit of the place, he began tracing her story. The bricks are, he noted, a nice texture and only lightly scarred by World War II. A Polish Jew who owned the building before the war, and survived it, abandoned the property when she immigrated to São Paulo.

Her departure left the tenement an orphan in the neighborhood, standing at the apex of two busy streets. People passed by and never noticed it until Janowski started to wrap it.

“The foiling process was provoking to the neighbors and pedestrians to all kinds of reflections and conclusions, and often confusing to them in the beginning,” says Janowski. 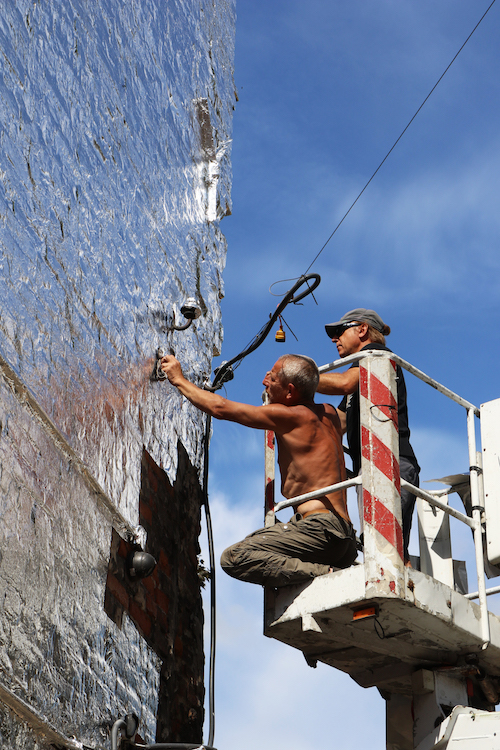 For the 56-year-old artist, the process is meditative: as he rips off each sheet of foil, sprays it with adhesive, and molds it around the brick, wraps it over satellite dishes, and tucks it around door and window frames, he’s falling deeper in love.  When finished, the building changes from Zabkowska 9, to the art installation 'Zabkowska 9, Take Off'.  With each sheet, he reminds his curious audience to stop and appreciate this beautiful timekeeper, and admire its beguiling silver skin.

“I know from the beginning that sooner or later I will need to destroy it,” he says. He’s mesmerized by foil because of its transient powers.

“I like temporary; it’s the essence of my aluminum installations. Many people remember more fleeting than permanent . . . I’ve encountered dozens of opinions like this,” he says, referring to a comment made by a 60-year resident, who told him she had never noticed the building until he wrapped it in foil. “So, even if this building is about to come crashing down, she will always remember its aluminum look.”

Despite completing two other major projects, the artist hesitated, “I had a major crisis. Physically and emotionally, I asked myself could I finish this?”

I was always a little worried about Golab, you know, standing on the lift . . .

'Zabkowska 9, Take Off' required over a football field of foil to completely conceal, except for the two windows he left uncovered to allow light into the restaurant at the street level of the building.

The neighbors see Wiesław Gołąb sweeping the courtyard. “They see him differently. There was a big contrast in his presence from before the project began,” Janowski explained.

The foiling process became a performance that continued for nine days. Much of the work was done standing on a scissor lift a couple of stories above the street. “I was always a little worried about Gołąb, you know, standing on the lift,” says Janowski.

Gołąb did not fall and the foiling spectacle compelled people to ask about the project. During that time Janowski talked to hundreds of neighbors who reacted to the silvered walls as if a UFO had landed on the corner. 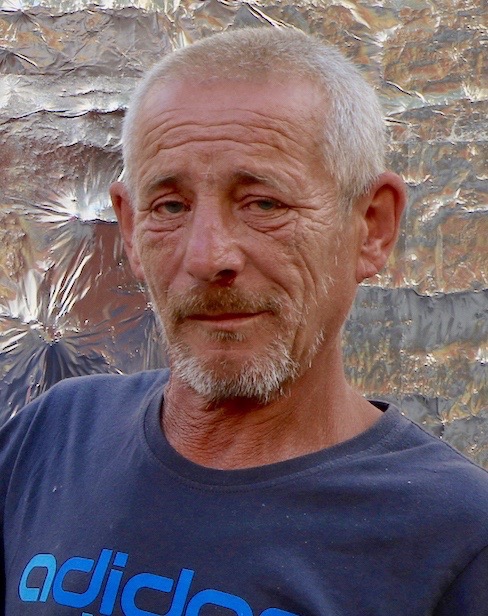 Gołąb’s newly found purpose ended as summer days shortened into fall. When Janowski finished the installation in October, just as the weather turned cool; the outdoor café closed, and Gołąb’s seasonal job ended. He soon slipped back into homelessness and heavy drinking. No matter that it was brief, Gołąb’s recovery was Janowski’s reward. “Art is to connect all of us and to break stereotypes, which are unfortunately very strong and dangerous.” Janowski and his transient assistant remain connected; Gołąb reports on the condition of the installation and the artist trusts the man to repair the foil when cokeheads tear off bits to smoke crack. 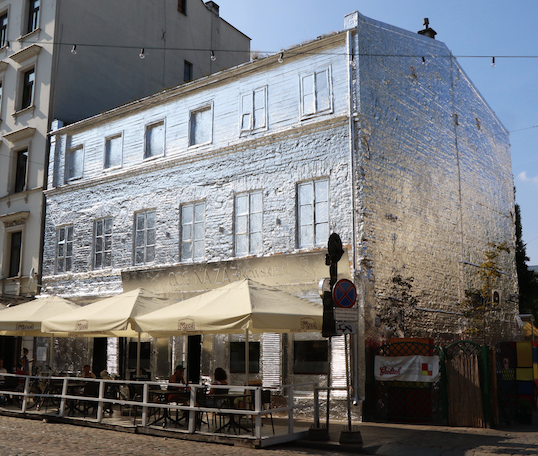 'Zabkowska 9, Take Off' was presented in a ceremony to the town VIPs in October. Coincidentally, as if to make the point that art shouldn’t be valued by what price it fetches, the famous street artist Banksy’s mini mural “Girl with a Balloon” dropped below her frame and tore into strips just as the Sotheby’s auctioneer struck the gavel to close the sale. Stunned investors gasped in disbelief as the stunt was broadcast in real time around the world.

“I love it,” says Janowski, referring to the event. “It’s the same philosophy. Our life . . . it’s just temporary.”

KYLE PIERSON has written about cities, privatization of the beaches, architecture, and how architecture is responding to sea level rise. She has written about Piotr Janowski’s previous project, ''Get off! Lodz Fabryczna!''; her article, 'A Spare Tire for the One Percent', was published in the online Journal of Florida Studies. Kyle is based in Largo, Florida, on the Gulf Coast.

The notion that art is

The notion that art is

The notion that art is created as temporary is a new one for me. I knew of the huge fabric coverings of years ago, and cheered for yet one more Banksy project. Now aluminum foil! I'm looking around my little town . . . and wondering.

Moving story. Radical neighborliness, even if temporary, and radical artistry. Wonder if there's anything similar here in Miami or Florida? Thank you.