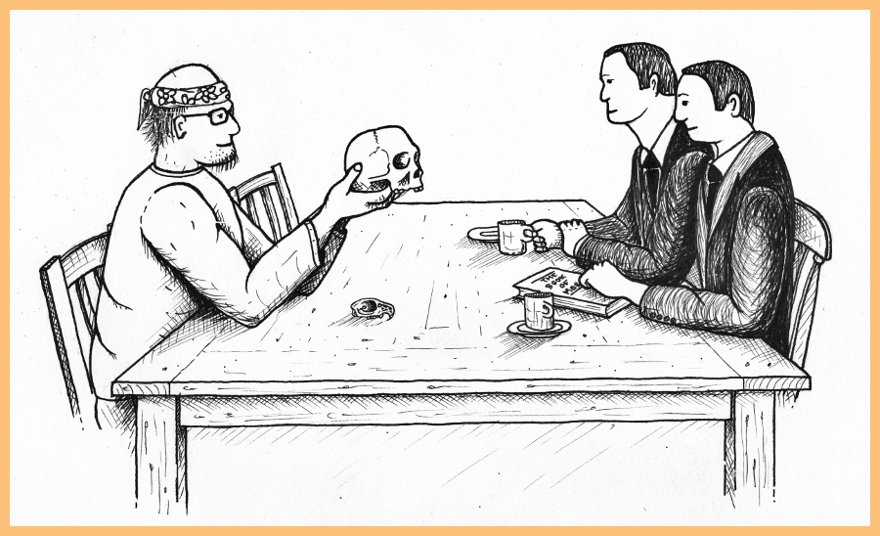 Like flocks of migratory birds, every Orkney Summer brought an influx of Mormon missionaries. Most of them came from America's Bible Belt, travelling half way around the world to convert the last of the island’s unbelieving natives. Without fail, every one of them had a healthy, Romney-esque glow. Compared to my siblings and me, covered in dirt and verging on feral in appearance, their cleanliness was overwhelming. Every hair on a Mormon's head looked like it had been individually accounted for and carefully combed into place alongside the rest. Like a work of realist art, it was hard for me to imagine how such a level of precision could ever have been achieved. This was what the anthropologist Alfred Gell once termed, “the technology of enchantment”. All of this order was a world away from the chaos of a frantic Orkney summer, with the garden quivering with life and animals duplicating left right and centre.

Unsurprisingly perhaps, the Mormons rarely came at a convenient time. If we saw them approaching, we'd run and crouch behind a hedgerow, giggling under our breath before getting distracted by other creatures that were hiding in the same place - but it was more a game than a serious phobia. Occasionally, a Mormon would catch us off-guard. We'd be planting seeds or shovelling manure when all of a sudden one of them would appear out of nowhere, and ask, very politely, “would you like to discuss God?”

Perhaps they would have been less keen to start the conversation had they known that my father was an evolutionary biologist, with his own collection of sermons at the ready. When he had the patience, he would say, “Yes, okay. You can tell us about God as long as I can tell you about evolution.” They would sit facing each other over the kitchen table, my father clutching in one hand a human skull given to him by a former student, while comparing it to that of a rabbit in the other. Most of the time the skull sat on top of one of the sideboards wearing an afro wig (and in a former life it had provided accommodation for a pair of hamsters). For these noble young men, sheltered from the unforgiving glare of science, it must have been quite an introduction. Many of them confessed that it was the first evolution lesson they'd ever received.

Seeing how we could live without God (the 'bearded guy in the sky' kind of God) confused the Mormons no end. One of them, perhaps realising that his words were being wasted on us, put away his Bible and volunteered to do some baking. He and his colleague took off their smart suit jackets, rolled up their shirt sleeves and set about making some American-style brownies while we ran about the table taking photographs. My mother later got him to write down the recipe. For some reason, it felt like a victory. Stripped of their uniform and covered with flour and egg, the Mormon spell was broken. They were no longer strange and mysterious beings, but simply young men far from home and missing their mothers' cooking.


Next up: Vol VII, The Dingles, to be published Friday 5th April!

*"Compared to my siblings and

*"Compared to my siblings and

This website is a real find! Very sympathetic to mankind's great need for exchange, patience and understanding. I also like the illustrations!