Category
Eating & Drinking
Agriculture
Health & Healing
The Giving Walnut
by Lisa Ann Wilson
Published: Feb 09, 2020
Standfirst
The rich history of a nut that is a powerhouse of medicinal benefits — and a tree heavy with sexual lore. Illustrations by Erica Glover.
Body

The Persian or English walnut (Juglans regia) is favoured for nut production and is the walnut most of us are familiar with; it originated in Persia. The black walnut (Juglans nigra) is a majestic tree with highly scented leaves and golden autumn colour; the nut is higher in protein and provides a taste more robust flavor and a crunchier texture. This nut is particularly difficult to extract from its shell; its trees are native to eastern North America. The butternut (Juglans cineria) is used for culinary purposes and traditionally makes the best dyes.

The Livermore red walnut, was developed by the University of California from a cultivar developed in 1978, Juglans pupurea. The red skins are very delicate, so the nuts require careful shelling. As well as being colourful and interesting on the plate, the red walnut has a milder flavour, and with less of the bitter after-taste of the common walnut.

From Medieval times they were blanching, crushing, and soaking walnuts to create nutritious ‘milk'.

Though walnuts are fussy about frost, a long cold winter is necessary for good nut production and yield, so the crop this fall should keep prices stable, we hope. A curious tradition (hot-blooded tree huggers take note) recommends whipping a walnut tree to improve the quality of the fruit it bears.

Walnuts have been with us certainly since the Pleistocene era, and it is has been mooted that during the last Glacial Period walnut trees disappeared from Northern Europe and were reintroduced by Barbarian invaders, and Greek and Roman conquerors bringing trees from their homelands. English merchants have been recorded trading walnuts since 1567, although England did not grow walnuts commercially, it was through this sea trade that walnuts became known as “English Walnuts.” These English Walnuts made it to California in the 18th century and today it leads the way in improving and developing new varietals, such as the red walnut. The black walnut found in the Central Mississippi Valley and Appalachian area is regarded as native to North America and dates also to the Pleistocene Era.

The botanical name Juglans is derived from Jupiter’s glans.

Jupiter’s glans is derived in reference to the acorn or glandular structure of similar shape (the end of his penis). The ancient Greeks stewed walnuts and ate them to increase fertility, whilst the Romans associated the walnut with Juno, Jupiter’s wife and the Roman goddess of women and marriage. A Roman wedding custom was to throw walnuts at the bride and groom to encourage fertility (ouch!)

The sexual nuances to be cracked from this fruit of the gods are endless, least of which is the reference to the scrotal area oft likened in size and appearance to walnuts, hence ‘nuts’. Carrying the nut in its shell was believed to promote fertility. Generally in folklore the walnut’s uses and meaning relate also to the healing and strengthening of the heart, and warding off rheumatism.

Once the walnut makes it back to Northern Europe things become a bit confused. A Romanian bride placed one walnut in her bodice for each year she did not wish to conceive; after the ceremony she had to bury the walnuts.

The green casing was used to stain skin brown as an alternative to stockings.

TOXICITY: 'TREE OF EVIL — OR JUST A SELFISH TREE?

A myth has it that those who fall asleep under a walnut tree may suffer madness, prophetic dreams — and may or may not awaken! Horses get ill, flies tend not to go underneath, and wood-workers have been known to suffer from its fumes and sore skin after working with walnut wood. Further digging unearthed the causes – chemical inhibitors (allelopathy). The walnut tree essentially ensures it’s competitors or attackers do not encroach!

From as early as 77 AD, the poisonous effects of the Juglans genera on other plants was noted. Juglans Nigra contains the largest and most concentrated form of juglone (the active allelopathic agent, 5-hydroxy-1,4-naphthoquinone). Over the centuries it has been used to poison fish, as a herbicide and an antifungal/antibacterial agent.

Juglone is extremely toxic and even in tiny amounts can be sickening, sedating, or can kill people and animals. It is illegal to import walnuts into Japan. Juglone is a respiratory poison and disrupts oxygen use. Its effect is similar to cynanide, which can be derived from bitter almonds and to a lesser extent apple pips,cherry, apricot and peach stones!

Is the walnut tree one of nature’s dictator? Its use of chemical warfare over rapid colonisation hints at such. Another name for the walnut, the Roots of Evil, refer to witches in Italian folklore. It was said that if you happen to meet a witch and don’t want her to follow you, you place a walnut on her lap or under her chair and she will root to the spot. Uh, nifty folkore.

Bulgarian folk beliefs suggest that certain tasks undertaken in advance of planting a walnut tree to avoid premature death or becoming estranged from your loved one — so, just letting you know: for those who are supertitious, or Bulgarian, this is research that may be worth reading up on.

Walnut branches are believed to protect against lightning.

The French had gone walnut mad by the 4th Century A.D., Charlemagne eventually ordered his gardeners to plant walnut trees throughout his extensive properties and by the 11th Century French peasants were expected to tithe them to the Church!

From Medieval times Europeans have blanched, crushed, and soaked walnuts to create nutritious ‘milk.’ The poor foraged for wild walnuts whilst the rich afforded the luxury of the larger cultivated varieties. By the end of the 17th century, walnuts were an important staple food in France, and during the famine of 1663 the poor ate the walnuts and ground up the shells along with acorns to create coarse flour for bread. In World War II the walnut again became the main source of protein in the Perigord region.

Often thought to be too high in fat, they are actually powerhouse of nutrition.

When not eating them (or promoting fertility!), the ancient Greeks utilized the walnut as a hair, wool and cloth dye, lamp oil and medicine. Boiled walnut shells made an effective dye for wool as they do not require a mordant to fix the colour. The shells of the butternut walnut make the best dye.

As an austerity measure, during and after the world wars, juice from the green casing of walnuts was used to stain skin brown as an alternative to stockings. Unfortunately it didn’t wash off and was a bit blotchy. The original fake tan?

The walnut kernel is a symbol of unity and healthy relationship between the children in the family.

Walnut oil is high in polyunsaturated fatty acids, with a high presence of alpha-linolenic acid and linolenic acid. Beware: roasting or blanching reduces the antioxidant quality; 90% of the phenols are found in the skin so it is best to eat uncooked walnuts, or use the oil for maximum benefit.

The form of Vitamin E in the walnut is somewhat unusual and gives significant protection from heart problems and aids cardio-vascular health. The walnut’s phytonutrient profile is quite rare; the antioxidant and anti-inflammatory properties have shown promising results in regulating metabolic problems and supporting bone health and dementia,

Limited studies have indicated further potential benefits in the area of memory and cognitive process. Melatonin, a molecule essential to the working of the nervous system, behaves rather like the hormone that regulates sleep, circadian rhythms and adjustment to light and darkness. It has been noted to naturally occur at measurably high levels in the walnut. This may be why eating walnuts has long been seen as a cure for madness. 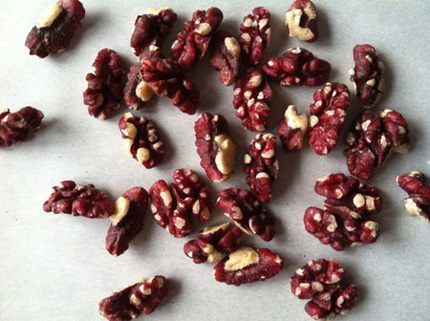 WEIGHT LOSS: an ounce of walnut contains 2.5g of omega 3 fats, 4 g of protein and 2g of fibre that help provide satiety, an important factor in any successful weight management plan.

DIABETES: women who consumed 28 grams of walnuts twice a week, were 24% less likely to develop type 2 diabetes (maybe because they were less obese because of the effects on weight loss). Tag: Journal of Nutrition.

HAIR: thicken hair as they contain biotin and vitamin B7.

SKIN: they contain B-vitamins and antioxidants.

SPERM QUALITY: eating 75 grams of walnuts a day for 12 weeks improves the vitality, motility, and morphology of sperm in healthy men aged 21 to 35. This may be as omega-3 fats and other mono and polyunsaturated fatty acids play a critical role in sperm maturation and membrane function. Perhaps the Greeks knew this all along! Tag: UCLA study.

INDIGESTION: for stomach indigestion and other digestive imbalances drink a tea made from the trees leaves

CONSTIPATION: a strong laxative; use the bark of the black walnut.

COLDS: made into a drink walnuts are held as a cure for sore throats and to cool agues.

The walnut spirit heralds the coming of opportunities to follow on one’s unique path in life.

This article first appeared in The Journal of Wild Cuture on June 20, 2014.

LISA ANN WILSON has a passionate interest in horticulture, is an avid cook, and was a founding member of the team that created The Journal of Wild Culture online. Having spent most of her life in the UK, she now lives in Tokyo.

ERICA GLOVER is a member of The Journal of Wild Culture Design Team. Fascinated by the quiet things that go on around her, she enjoys recording her observations and giving them new life through illustration and animation. One ongoing project is the Survival Guide to the City, a series of tips inspired by methods of survival found in nature. She lives in Toronto.  ericaglover.com

Hello, Thank you for your

Hello, Thank you for your

Hello, Thank you for your article. My Chinese acupuncturist has collected walnut branches from Poland for me to boil for 4 hours and drink a certain amount daily (I can’t remember how much) for seven days to help with my estrogen positive breast cancer. I’m a bit nervous about this and trying to do research, but there is very little info out there. Do you have any recommendations? Thank you again.