Category
Tools & Technologies
Wildlife & Wilderness
Research
Hacking the Animal
by Herbert Wright
Published: Feb 02, 2015
Standfirst
Myth and magic turned humans into animals . . . could technology do the same? If it did, would being an animal be just another crazy throw-away thrill, or could we learn something that might help humanity survive? Our Editor-at-Large muses on these other questions.
Body

LONDON — Are we done with electronically altered experience? This January, Google withdrew Google Glass from sale, putting on hold the dream of AR (augmented reality). Meanwhile, thousands of disaffected Western kids have chosen not the mindless violence of ever-more realistic computer games like Manhunt and Grand Theft Auto, but the real thing in the theocratic terror zone of the Islamic State. Elsewhere, military personnel drained of emotion guide lethal drones with joysticks from control rooms thousands of kilometres away. And we all consume ever mounting volumes of pictures and personal updates from connected devices, learning less and less as we do. Technology has made junk of experience.

Where can we go from here? Can technology deliver experience that is new, fulfilling, and links us to the real world? There is one vast uncharted ocean of experience that may tempt us: that of the still-uncounted species we share the planet with. Could we ever experience what it is to be an animal?

In our imagination, we make all sorts of bridges to animals, both warm and sinister. Countless stories give animals human characters, while others fuse the animal into the human. Magic rituals transform humans to werewolves. In real life, we try to get close to them in zoos, aquariums and safaris. We can get even closer, for example, with pets. Perhaps an intimate act of affection like stroking a cat — sharing in the contentment as she/he purrs — is as close as we get to animal experience. But there is still a gap between their experience and ours. Could we close it? King Louie, the orangutan in Disney's Jungle Book, dances and sings that he wants to be like you, but maybe we might try to be like him. And just possibly, technology might make it happen.

Perhaps the biggest challenge is decoding the mind's processes that make sensations — ours, or an animal’s — feel real.

Since 2005, cameras have been light enough to be mounted on birds, giving fantastic footage from the air. Already, we can enter into their world, but our version of their experience is based on just our strongest senses, sight and sound. There is nothing in the visual feed of, say, the chill and flow of the air, which a bird's brain is wired to read with precision so it can instinctively fine-tune wing and tail control. Navigation in some bird species relies on sensing the Earth's magnetic field, something quite alien to us. Adding such channels of sensory input from the bird, or any other animal, would get us closer to being the animal. Perhaps we could wire an animal to read all its senses and stream the data. External electrodes can measure the brain's electrical activity, but imagine an embedded neural implant operating in the brain itself. In other words, maybe we could hack the animal.

It may sound pretty far-fetched, but it's not inconceivable. For example, by using graphene (a new material in which carbon atoms link in a hexagonal array to make a super-strong electrically-conductive sheet one atom thick) there is the possibility of manufacturing devices that are so thin and flexible, a brain's operation is undisturbed. Technology like that takes us into where all the senses are processed. Perhaps the biggest challenge is decoding the mind's processes that make sensations — ours, or an animal’s — feel real. Yet, in 2013, Japanese researchers created crude images that bore resemblance to the dreams of people hooked up on fMRI scanners; maybe one day we could see the images in another's mind. 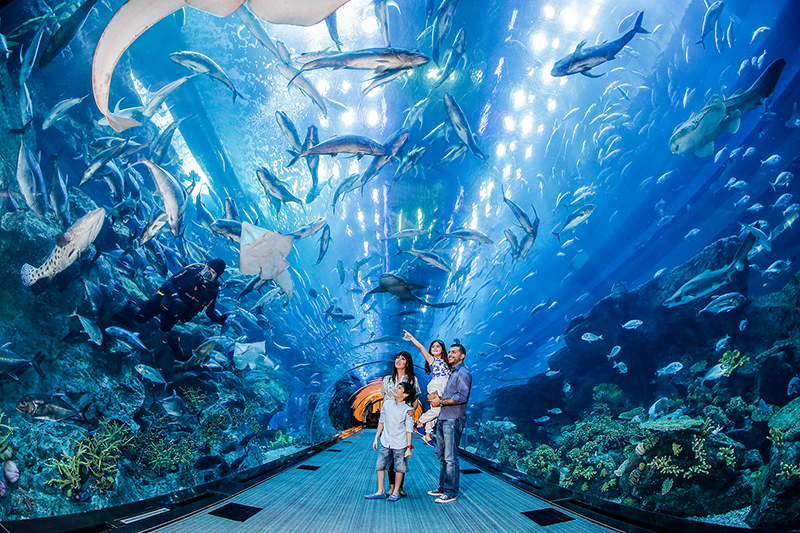 The Dubai Aquariumin and Underwater Zoo in Dubai Mall is a diverse ecosystem that enables visitors to get physically close to animals — about 33,000 of them. (Photo courtesy: Emaar)

There's a long way to go, but research is homing in on how the brain and ultimately the mind work — for example, with President Obama's BRAIN Initiative.

Familiar things like appetite, locating food and the satisfaction of feeding are things that we share with animals. It may be a mental jump to savour the still-living flesh of a small bird or bat that a falcon has just caught, but it's not that alien. Humans have wildly different diets, some including raw meat.

And there are other reasons suggesting we can feel like the animal. Humanity has adapted to challenging physical environments from jungles to mountains. Our personal adaptability can be rapid, as demonstrated in survival shows on TV, which take people out of the safety of the city and into the wild. We also adapt to drastic changes in our body; for example, losing a limb, perhaps replaced by a prosthetic one, so that perhaps we could master bodies with wings or four legs. Our brains are plastic and imaginative, able to handle the new, the challenging, the strange and the extreme. And if we can feel what it is to be the animal, we are at the threshold of the animal psyche itself. 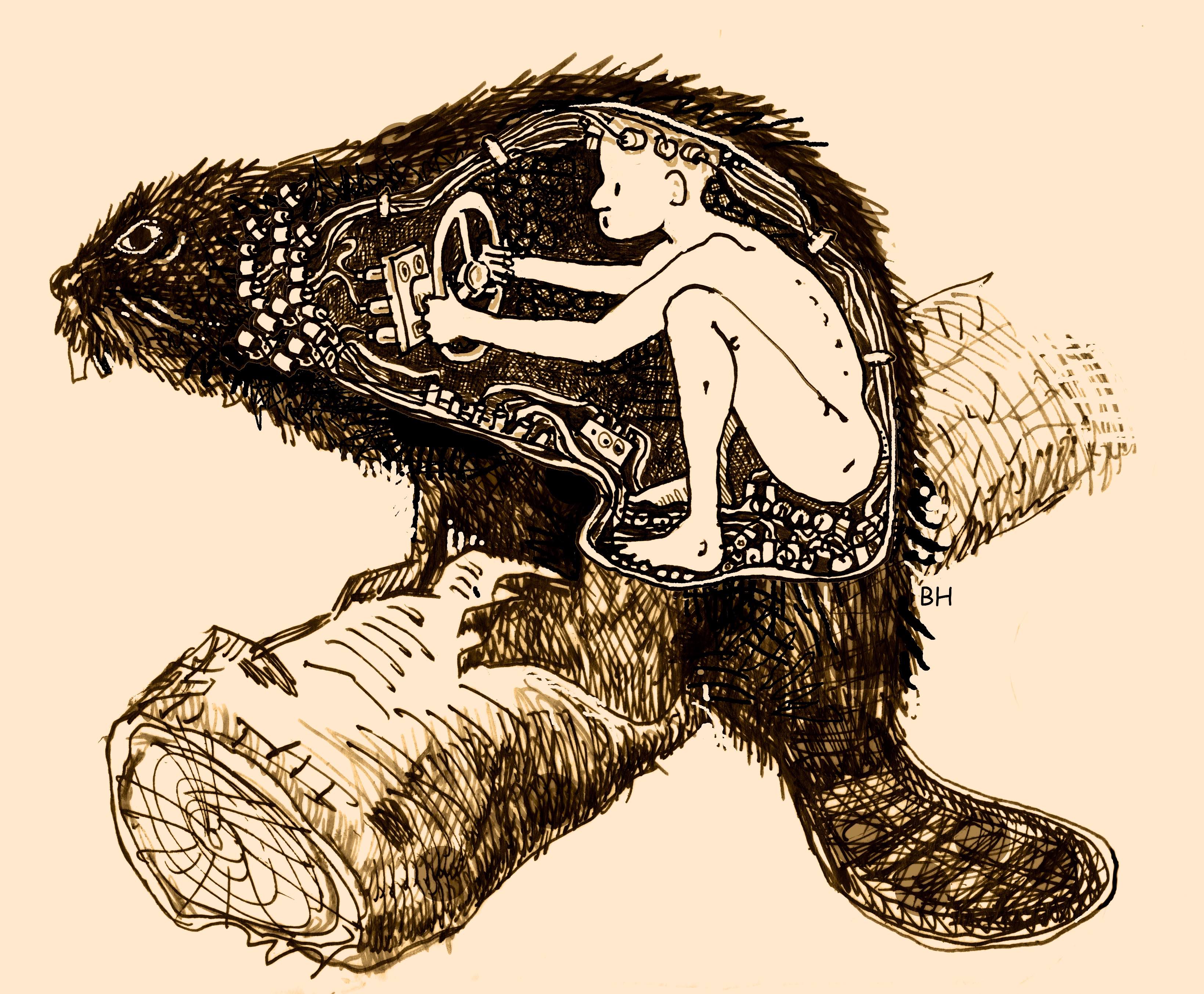 If technology ever takes us there, it wouldn't all be adventure. Frolicking around in the natural environment is likely to take second place to satisfying basic needs, like food, safety and sex. If you wanted to be a lion for a day, you might spend much of the time hungry, and need vast reserves of patience to overcome the boredom of waiting for the possibility of a kill. As for mating, you could be right out of the picture unless you were the alpha male, and as a female, you may have about as much choice in the matter as a rape victim.

That brings us to a crucial element required to assume the beast: Control. If you could direct the actions of an animal as well as experience as an animal does, then effectively you would be the animal. Some would pay good money to assume a predatory animal — maybe the same types that hunt with guns or hounds. What a change of perspective if a hunter assumed the lion or elephant and became the hunted species! People choosing a strong creature — such as a bear, or a fast one like a cheetah, or a monkey that could swing across jungle canopies — would revel in new strengths, as if they were super-heroes.

Yanking an animal 'offline' renders it a prisoner in its own body, a mere powerless bystander controlled by human whim.

Considering all this, things are looking serious. What if animal hackers wanted to come to town to try their new powers there? Being empowered with animal strengths could make us as dangerous as a loaded gun. Alternatively, imagine a scenario where being the beast is punishment — for example, condemning someone to a sentence as a rat. If your host animal died, the condemned may be allocated to another species, in a cycle ultimately echoing the endless reincarnations of the Hindu soul. But there is a more immediate issue — the rights of the animal. Yanking an animal 'offline' renders it a prisoner in its own body, a mere powerless bystander controlled by human whim. We may just be borrowing the beast temporarily, but we would be assuming responsibility for its well-being too. Any animal possessed by a human may suddenly be smarter, but also less skilled in its environment, and therefore more vulnerable. Maybe control could be shared. In that case, the animal may sense a guiding spirit, like those humans who claim to be acting on voices in their head.

If hacking into higher animals such as big vertebrates is dubious, what about simpler creatures, like insects? Like us, they act on what they sense around them and are guided by instincts programmed for survival. Some species are social, but in a completely different way — ants, termites and bees, for example, build extraordinary habitats by applying swarm intelligence. Understanding the collective experience of a species such as the bee is far more alien than being a lion. 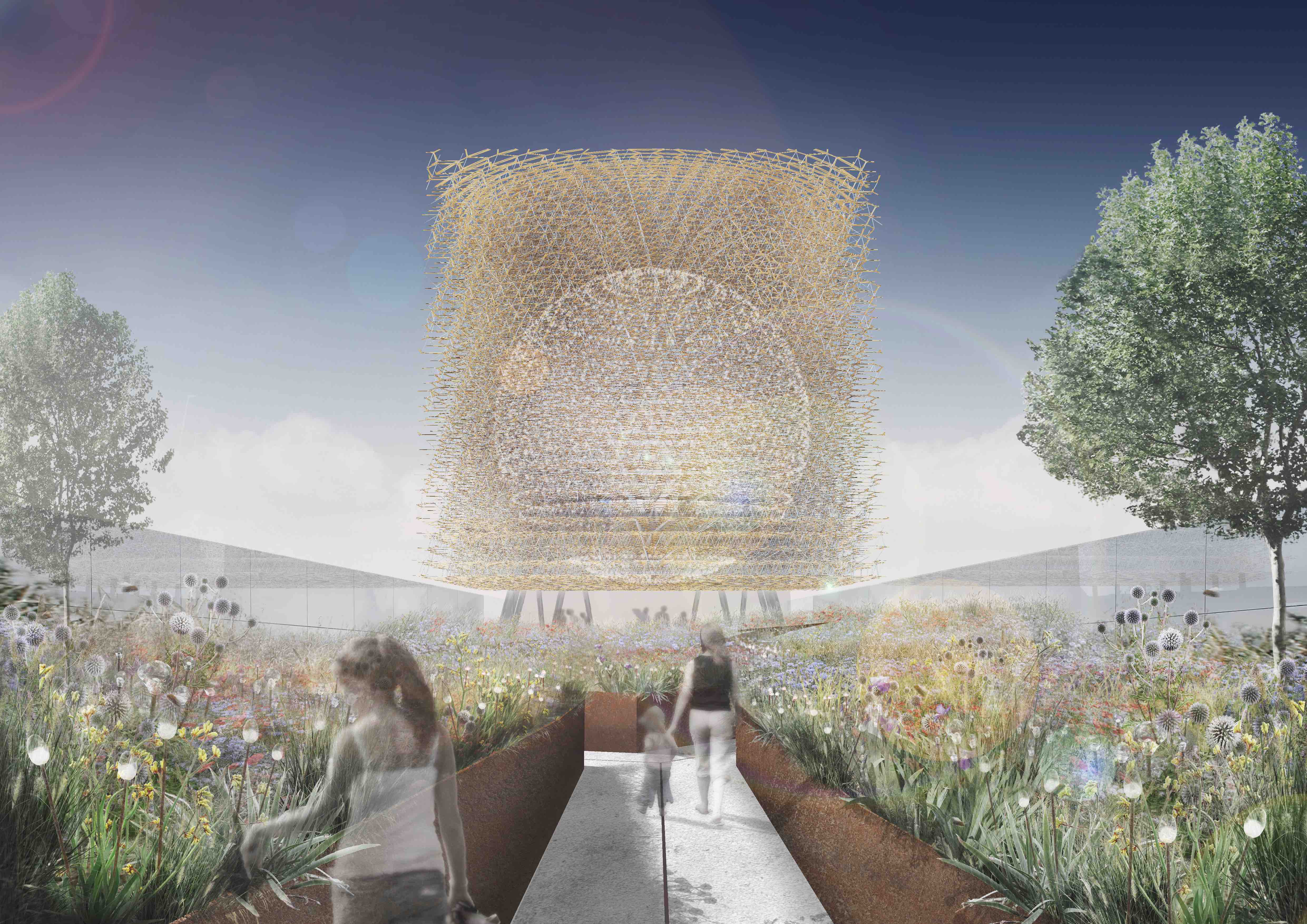 Pollinators will flutter and buzz across the 'meadow' that leads to the Hive in the UK Pavilion at Milan Expo 2015. (Picture courtesy Wolfgang Buttress)

Nevertheless, this summer, we're taking a step in that direction, at the UK Pavilion at the Milan Expo. Bee populations are declining sharply, yet they are vital as pollinators in our food chain. Looking for clues as to when they are about to swarm and become most vulnerable, Dr Martin Bencsik at Nottingham Trent University has been monitoring the vibrations caused as bees communicate through movement in their hive. He uses accelerometers to measure that movement, and their signals from a real hive will be translated into sound and light in a spherical void nine metres across that is the highlight of the pavilion, which includes an English meadow. The concept and design by artist Wolfgang Buttress essentially delivers a real-time physical analog of the hive. Walk into it and the experience is immersive, unique, and extraordinary.

Buttress' Hive opens a very different and potentially far more productive path to the animal experience. Research to understand species great and small, from the inside rather than out, could help save them, and the ecosystems that ultimately all life as we know it, including ourselves, depends on.

If changes like that help humanity survive, there may come a time to have fun again.

But before we dismiss the idea of us being animals, consider a final possibility. Hybrid humans, part animal, could be genetically engineered. It may be fun to create centaurs to roam the plains of Central Asia, or mermaids and mermen to swim the ocean, but that's foolish fantasy. At some point, humanity may have little choice but to biologically adapt for a rapidly, radically changing environment.

This century, climate change will make Earth hotter, with more extreme weather events. That will accelerate global water stress and render current agriculture unsustainable. Imagine having genes to survive with scarce water, like a camel, or slow metabolism requiring less energy from food, like sloths. If changes like that help humanity survive, then centuries from now, there may come a time to have fun again. And then, you may choose to live entirely as something else… perhaps, after all, as an intelligent lion, but in a re-wilded Earth.

Or even a giant sartorial rabbit, rushing down a hole into the unknown, already late for whatever it will lead to. Just as we are now. 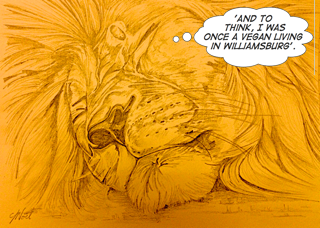 HERBERT WRIGHT is a London-based author and journalist specializing in architecture and art, and an editor of The Journal of Wild Culture. He studied physics and astrophysics at the University of London. He is currently a contributing editor of Blueprint magazine, and contributor-at-large to Design Curial. www.herbertwright.co.uk 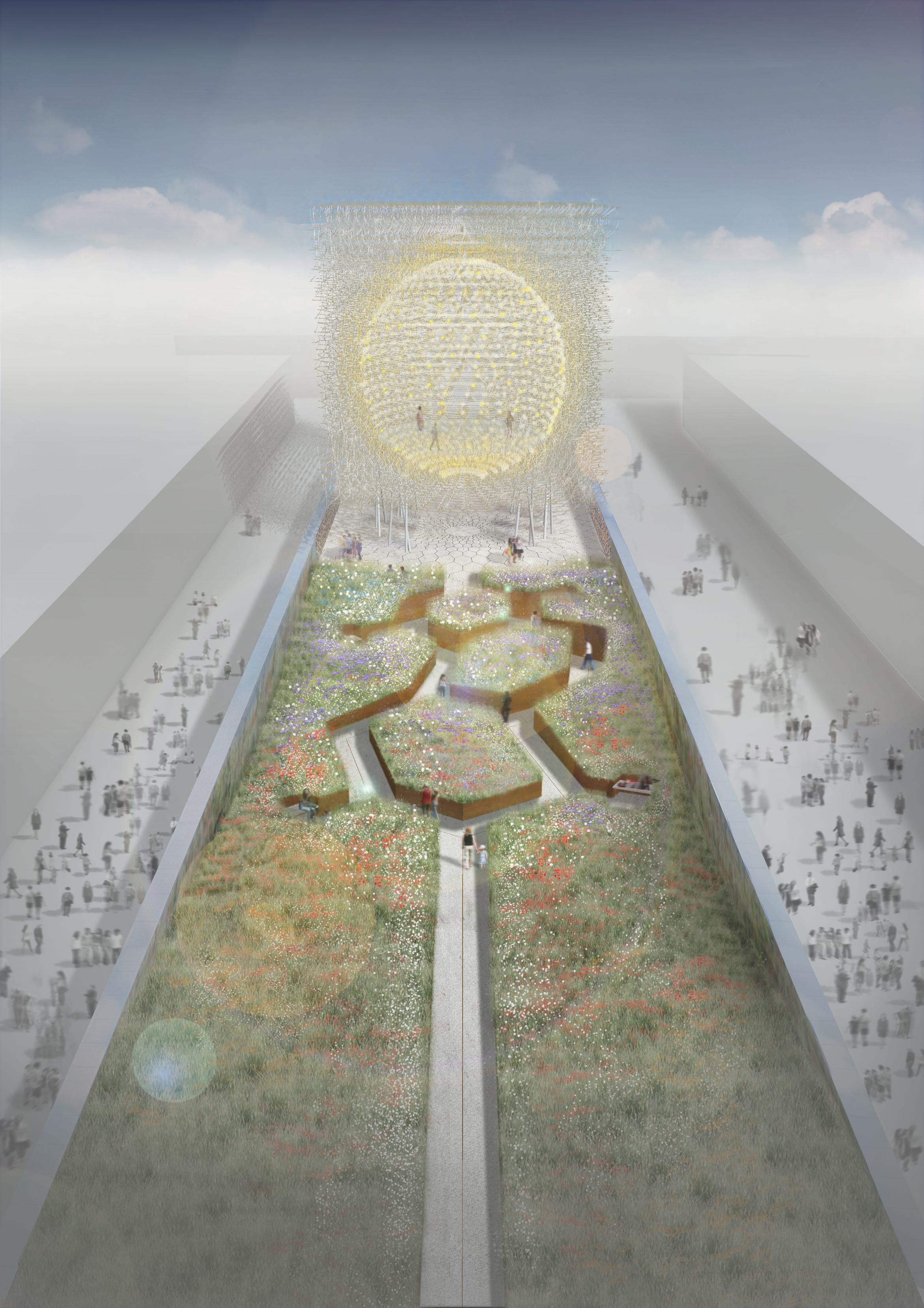