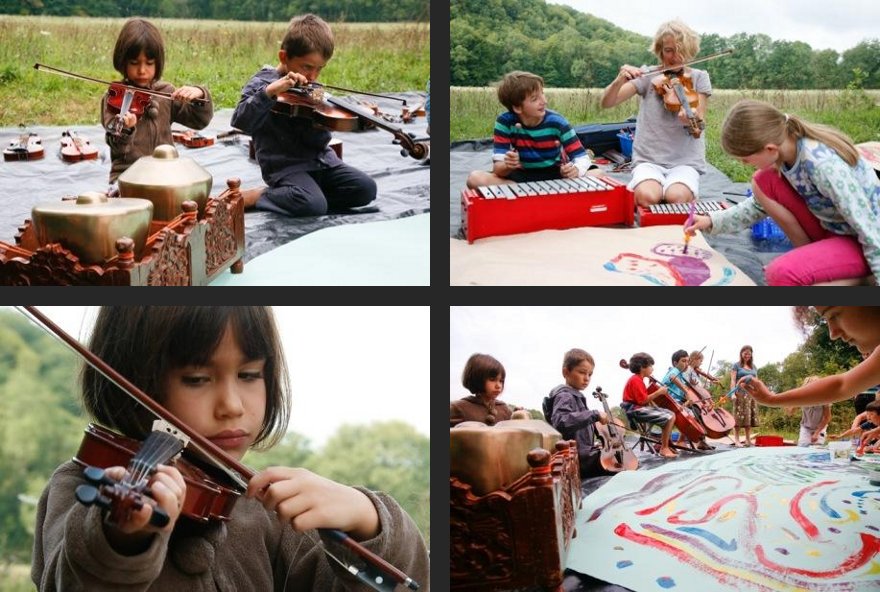 It’s a sticky-hot August day in the Dordogne region of south-western France: the setting for the 2011 Summer Dharma Gathering, and my first encounter with Sandra Barefoot and Sarah Moody: two members from the Bristol-based venture Visible Thinking, a company working to question the way we think about childhood creativity and how best to enable it to flourish. It’s an issue at the heart of contemporary society – with more children currently diagnosed with ADHD and prescribed Ritalin than ever before. Creativity expert Sir Ken Robinson’s TED talk on this very topic is one of most viewed ever.

The week-long Dharma Gathering takes place at the Moulin de Chaves and entails looking after children ranging from ages four to sixteen of all different nationalities (Brazilian, English, French, Israeli…) leaving their parents free to further their meditation practice with resident teacher, Martin Aylward. But it’s the arrival of Sandra and Sarah that I remember most: after a long drive down from England, parking up their blue van beside the big-top tent we had erected in the Moulin’s flowery meadow. The van was full of instruments; child-size violins, guitars, xylophones, bells, tambourines, shakers and more.

“Are all these for the children to play with?” I asked.

“Of course,” Sandra replied, unloading the van and helping Sarah to tune the instruments.

It was our first morning with the children and we welcomed them into the tent. Sandra and Sarah had set up a large piece of paper before them, blank except for the expectation that the children pasted onto it as we all sat down, not quite sure what was going to happen.

Sandra then quickly sketched a large tree on the paper, as Sarah accompanied her with music – pulling her bow over the strings of her violin. The children’s eyes widened, not sure what to make of it. Gradually the story before them grew, wordless, as Sandra brought an acorn to the top of the tree, allowing it to fall on the head of a little man made from a lolly-pop stick below. The children laughed, as did I and all the other adults sharing in this moment with them.

In the story, the lolly-stick man was upset by this acorn falling on his head, so he climbed to the top of the tree to find out where it had come from. And from what had begun as a blank white page, the adventure soon unfolded; with the lolly-stick man swept up into the sky by a passing bird, before being dropped into the sea and swallowed-up by a bulging whale, all perfectly timed to Sarah’s percussion. The children were mesmerised.

At the end of the story, and after the lolly-stick man had survived his ordeal, returning to his resting place beneath the tree, Sarah greeted the children:

“We wanted to show you this story because it is just one thing that you now might like to explore amongst yourselves; you can use any of the instruments, paints and paper, and we will be here to assist you,” she said.

What happened next was truly inspiring. The children all hopped to their feet and dashed for the instruments, trying them for the first time in some instances; seeing what happens if they pulled their bows over different strings, or used their beaters to hit higher and lower notes on the xylophones. And soon the meadow was filled with music: never before has a meditation centre been so alive with noise – something we wagered would be beneficial in helping the parents, silently seated in the meditation hall beyond a small canal, to really discipline their practice…

The whole week of the 2011 Gathering passed by very much like this: each morning the children were shown a small piece, be it painting to music, or making clay models, and then it was over to them – given unhindered access to the materials and their imaginations. It was a beautiful thing to be a part of, seeing children so free in their expression, and so free in themselves.

It was all a far cry from the highly structured world of mainstream education, with endlessly measured examinations, assessments and objectives. How free are teachers in allowing their pupils the space to learn through their own means, and in their own way? The difficulty teachers face is that creativity cannot be easily marked; and worse still, creativity does not fit into the standardised criterion that indentifies a successful pupil from a failing one.

In his fabled TED Talk, Schools kill creativity, Sir Ken Robinson argues that, “We don't grow into creativity, we grow out of it. Or rather, we get educated out if it.” There is a reason why this particular talk has been viewed more times around the world than any other – it resonates deeply with a large number of people who believe he is right. Education is not what leads to creativity, but creativity is what leads to education. But why is this important, to let our children freely explore their creativity?

One answer – touched upon by Robinson – emerges by looking at the flipside of creativity: children that don’t fit within the rigid boundaries of the education system, then labelled and drugged. In May 2012, The Observer detailed how the prescriptions of Ritalin to treat children diagnosed with Attention Deficit Hyperactivity Disorder (ADHD) had quadrupled in a decade, “prompting fears it is being pushed on children at the expense of alternative treatments and without appreciation of long-term effects”.

Robinson also points out that ADHD is replacing ‘trouble-maker’ or ‘difficult’ as the label attached to the children who can’t sit still in classrooms, children who have ‘to move to think.’ Of course, there are genuine cases of ADHD, and the best course of treatment in the interest of the child should always go without question. But this is about the children who don’t fit in, always looking for their means of escape, to be creative, and as a result are promptly diagnosed as having ADHD. This is just one example of the education system letting down our children, and evidence that creativity needs to be nurtured and cultivated, not tied up and drugged.

For instance, back at the Gathering in 2012, exactly a year after my first encounter with Sarah and Sandra, we found that there was one child in the group who wasn’t always willing to join in with the communal activities. He would sit down and read Harry Potter during our dancing sessions, or run off to climb a tree when all the other children were playing with the instruments or circus hoops. Inside a classroom, this little boy might well have been termed ‘difficult’ or worse. So what could we do? We couldn’t force him to join in with our activities; besides, he has his own mind and wouldn’t have even if we had asked him to. So in the end, we were the ones who had to learn enough about him in order to see what it was that stimulated him.

We live in a changing world, and the people best suited to success are the ones who can continue to be creative.

During one story session, the boy asked if he could draw instead, and of course we didn’t prevent him. So he left the group and took himself into the tent. Following our activity, we all entered to see that he had drawn an incredible picture of a dinosaur, with nothing to copy but the image he had seen in his mind. It was remarkable. We realised then that this boy was not ‘difficult’; but an artist.

There is a very good chance that we might have missed the opportunity to discover this child if we had simply put up a barrier and told him: No, you must stay with all the other children. That moment of inspiration he had experienced would never have been allowed its potential to grow – it would have been suppressed by external forces working against it. The question that this raises is how much creativity is lost in this way, because children are seen as different, or because they don't walk the line that society has already drawn out for them.

There has recently been a growing awareness of ‘student-centred’ learning. This approach to education goes against the long-established ‘teacher-centred’ learning, which merely sees the pupil as a sponge to soak in what he or she is told. Instead, student-centred learning is an educational path that is tailored to each pupil’s needs, and gives the child more choice in his or her education. Teachers become facilitators, with their primary concern not what is taught, but how the philosophies behind teaching and learning can be continually accessed to allow greater development and self-exploration. Students are also actively engaged with teachers in the learning process: less sitting in the back of the classroom holding up heads with rulers as a dry monotonous voice reads facts off a whiteboard for forty-five minutes, better replaced with well conceived ways for a pupil to help in deducing the facts, encouraged by active problem solving and dynamic learning.

This is promising, but in order for it to benefit the majority of children over the present few, there will inevitably need to be a change in the way we present learning in schools and the curriculum, as well as the fundamental role of creativity in education. It is no surprise that Ken Robinson followed his talk with a second entitled, Bring on the Learning Revolution! Our institutions are broken, not the children.

We live in a world that is ever changing, and the people who will be best suited to finding success (which does not always mean financial) and happiness in it are the ones who can continually find a way to work within it, to be creative.

At the end of the Gathering, after the parents had all clapped along, laughing and cheering, with their children treating them to a talent show that they themselves had staged, Sandra spoke; she told the same story I have just told you about the little boy who wanted to read Harry Potter all the time. We displayed his drawing, and Sandra put it quite rightly:

“If we hadn’t have let him leave the group, then we might never have seen his talent.” She pointed to the colourful dinosaur, with the boy, its creator, sat smiling on his mother’s lap in the crowd. “Now we can see him.”

To be creative is to be seen by others, but more importantly it is to see ourselves – it is the mere act of learning.