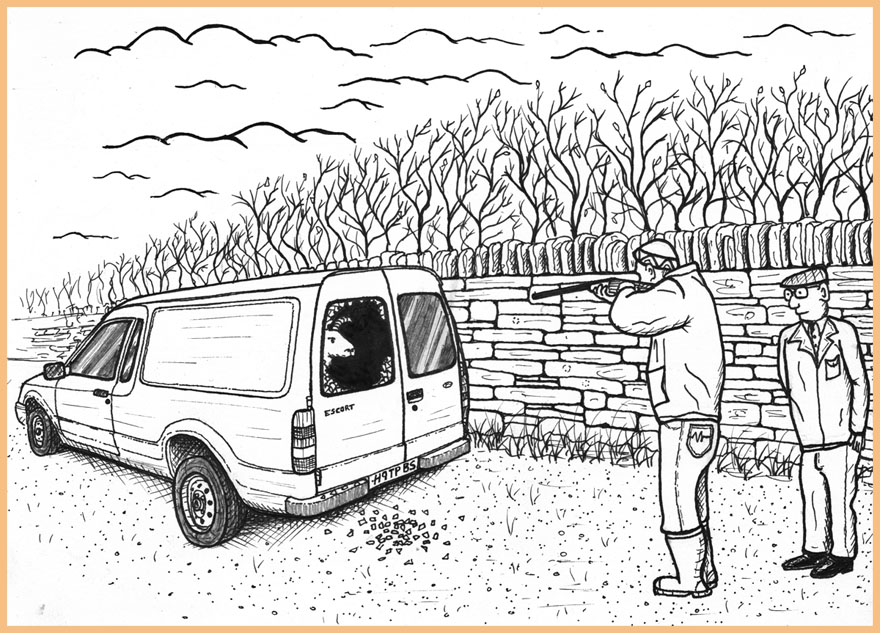 On the Orkney Islands, as in most parts of the world, pet-keeping is a common practice. For every culture though, the process by which an animal becomes a pet might vary. In Eastern Amazonia for example, a Guajá hunter – having killed the animal's mother – returns to the village with an orphaned monkey or agouti (a kind of large rodent) to give to his wife. While the hunter has no difficulty in finishing off an injured prey animal, the slightest mistreatment of a pet is severely frowned upon in Guajá society. Such animals haven't just been 'domesticated', they've been 'adopted'. This point becomes particularly clear once you've seen a woman breastfeeding an orphaned monkey as if it were one of her own children. As well as emphasising different gender roles (men as hunters, women as mothers), there's clearly quite a paradox here between the brutality of the hunt on one hand, and the tenderness and empathy of keeping a pet on the other.

A friend of mine called Victor Cova was recently carrying out research among the Shuar people of Ecuador. One of Victor's Shuar friends, Esteban, happened to have a pet toucan. Every evening, before sundown, it would perch in a small fruit tree at the side of the house, singing to attract a mate. To Victor's ears it was beautiful, but rather sad. Whenever another toucan approached, Esteban would take his gun or his blowpipe and shoot it.

In the West, of course, we tend to set aside certain animals specifically for eating. The idea of tucking into a cat seems almost morally wrong, whereas eating a beef burger (provided it doesn't contain any toxic horse) is considered quite normal. When I was a child, my family reared various animals for their meat, eggs and milk. We were particularly dependent upon the goats, and I learned how to milk them from an early age. To save them from constant molestation I'd practice on rubber gloves filled with water and a hole punctured at the end of each finger.

Every few years, to prevent their milk from drying up, the goats would have to be put 'in-kid'. This meant being loaded into the back of a car and driven to one of Orkney's 'stud billies', beasts of some legend that a few of the more open-minded farmers kept hidden in their barns. Goats, on the whole, were considered by most farmers an English invention, less practical than sheep.

If the goats gave birth to males, they'd be destined for the pot, whereas any female offspring would be kept for milking. Unfortunately for me, they seemed genetically inclined to give birth to males. With every pregnancy, I'd pray for a female, but for a long time it didn't happen. Over the course of their short lives, it was hard not to get attached to the males. Despite my best efforts, they'd end up becoming my friends. I'd do my best not to think of their fate, but it was never far from my mind. Losing my pets like this affected me quite badly. I used to have recurrent nightmares in which goats ran around in circles with their ears chopped off.

Amongst all of this death and destruction, one precious female was eventually born. Her coat was white, but mottled with dark grey as if someone had ground a huge pepper pot over her back and shoulders. Unlike every male before her though, she'd been inflicted with a mystery disease. She refused to suckle, and coughed up everything we tried to feed her. As the hours passed, she became weaker and weaker.

Refusing to give up hope, I went out to the barn during the night with a bottle of cow's milk mixed with warm water. Somehow, I got her to drink enough of this mixture to last her until the morning. Over the next few days, she began to feed with more regularity. Slowly but surely, her health improved. This was baffling to my parents because I'd been helping her in secret. I was only about ten years old at the time, and for some reason was worried that they'd disapprove.

The goat and I became good friends. I decided to call her "Weenie", and she and I developed a strange sort of telepathic communication. Her behaviour was exemplary, and her appearance – for a goat – rather sophisticated: at the local farm shows she won every prize going. With her help I even secured the prestigious title of "Best goat-handler under the age of fourteen", for which I was awarded an insultingly plastic medal. Sadly, all of our success was to come to a tragic end.

One morning, as usual, my mother and I went to open the door to the goat shed. Looking into the gloom, I could see something hanging against the wall. To my horror, I realised that it was Weenie. We rushed to her side, but it was too late. She was dead. During the night she'd been standing on a ledge and reaching up to the hay net that was attached to the wall. At some point, her head must have become entangled and she'd slipped.

My prize goat had hung herself.

Until her accident, Weenie had truly become a part of the family. For once, I was afforded the luxury of seeing one of my goats grow up, safe in the knowledge that it wouldn't end up in a stew or a casserole. With most animals, of course, it was a different story. This was particularly the case if they happened to be male.

One day, a lovely old man called Sandy, a wise and fondly remembered Orcadian, turned up on our doorstep with a ram thrashing about in the back of his Ford Escort. The creak in his voice was like a barn door being opened for the first time in a hundred years.

“Oh...”, replied my mother, “I'll have to ask Fred about that”. Although my father's called Peter, my mother has always called him Fred (he simply calls her “MOTHER"). His reply was predictable: "We can't turn down free meat!"

Peering out from behind the door, I could see Sandy's van shaking violently from side to side. Although it was ancient, the animal had clearly lost none of its vigour. Having agreed the terms and conditions, Sandy fetched a small metal stake and started tapping it into the ground in front of the house. How he thought this was ever going to hold a fully grown ram is still beyond me. All of a sudden there was a terrific explosion; the sheep's head burst through the back windscreen, showering glass and saliva across the yard. In the end, neither Sandy nor my father considered it safe enough to open the door and the poor thing had to be shot in the van. It took us all afternoon to heave its body, bloodied and blubberous, into a wheelbarrow and off to the barn where it could be butchered.

Although he's always been an animal lover, my father has never had a problem killing for food. Until fairly recently, of course, this was something that he shared with most people in the world. From an early age I was told that the most important thing was to give an animal respect; to ensure that it suffered as little as possible. When I was a boy, I too could kill if necessary. If, for example, the dog failed to dispatch a rabbit properly, my mother would hand it to me and I'd bash it over a fence post (the rabbit, not the dog).

Back then, killing was just something you did. I'd head off into the heather with the dog and a homemade bow and arrow, feeling entirely at home in my environment. In many respects, I've never felt so connected to nature. To some people, this might suggest that I was in some way disturbed, or lacking in empathy. This really wasn't the case. If my siblings and I ever came across a rabbit with a broken leg, we'd bring it home, take care of it, and nurse it back to health.

After losing Weenie, my childhood killing spree came to an end. I even stopped eating meat. The taste just no longer appealed to me. Out of courtesy, I once had to eat an entire plate of mince and potatoes. Afterwards, having fulfilled my obligations, I went upstairs and promptly threw up out of the nearest window. My parents, who have always been fervent carnivores, couldn't understand what was happening to me.

On the whole, my aversion to eating meat has remained (I still can't resist seafood or Spanish mountain stew). I feel particularly uncomfortable about eating animals that have been brought up to know humans as their allies, only to be stabbed in the back (or shot, or electrocuted) once they reach maturity. Hunting, by comparison, seems rather less deceitful. The rabbits in our area knew what to expect. Like the animals of the Amazonian rainforest, they knew no good could come from man. To them, after all, humans are just another kind of predator. Unless, that is, you happen to be one of the lucky ones.


Next up: Vol VI, One Fine Mormon, to be published Friday 14th March!

They could have at least

They could have at least

They could have at least awarded you a metal medal.... Well written, Merlyn!