Descartes at the Circus: Views of the Brute Creation in Performance 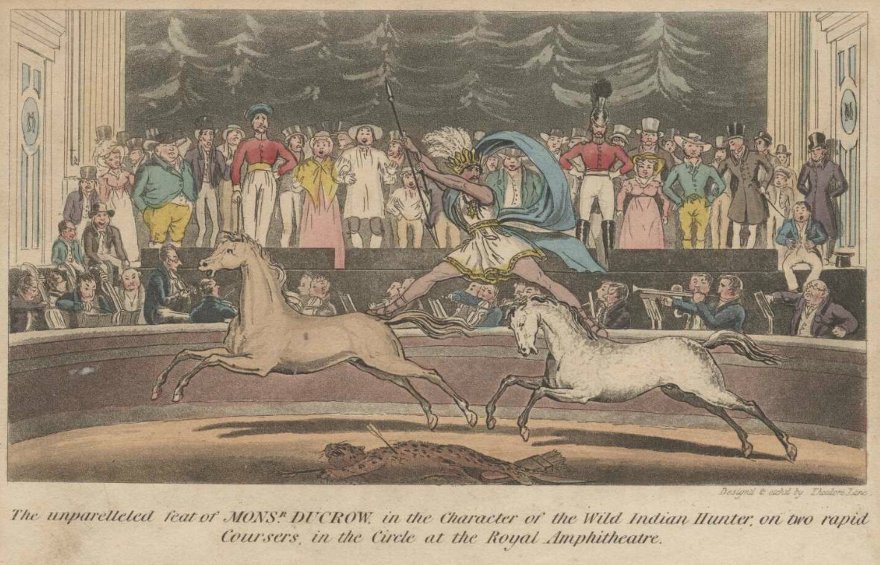 I have vivid memories from my childhood of the television adverts for PG Tips, featuring anthropomorphised chimpanzees drinking tea and talking, voiced by actors. These adverts were first aired in the 1950s and ran, perhaps surprisingly, until 2001, despite complaints in the ‘70s from animal rights groups. In response to new sensibilities, the becostumed simians were replaced ten years ago by claymation versions and more recently a puppet. Indeed, the PG chimps would hardly be tolerated now, at a time when “No animals were harmed during the making of this film” is a familiar disclaimer.

These cultural indices suggest how the attitude to the treatment of performing animals has shifted in the last 70-odd years and more generally how our relationship to animals has – in some respects – become ever more ‘enlightened’. The same may be said of the evolution of the modern circus. Increasingly, major circuses touring the UK focus on human acrobatic and gymnastic skills, and animal-free circuses seem to be becoming the norm globally.

With these developments in mind it is hard to conceive that the early development of the modern circus in the last quarter of the 18th century has been credited not just with reflecting an increasingly sympathetic attitude towards animals, but with actually shaping it. This intriguing thesis was the subject of a symposium hosted on 13th November by London’s GV Art gallery, organised by the charity Art and Mind and presented by Marius Kwint, Senior Lecturer in Visual Culture at the University of Portsmouth.

Dr. Kwint outlined the foundations of the modern circus as a product of late 18th century England, emerging primarily from the racecourse – trick riding was at the centre of this burgeoning form of popular entertainment. Despite the traditional connection between horse riding and the nobility, the circus performers tended to be from a plebeian background, including the widely acknowledged ‘father’ of the modern circus, Phillip Astley, who opened his first riding venue in 1768 near the present Waterloo Station. Trick riding was soon supplemented by other elements that rapidly became familiar staples of the circus – clowns, ringmasters, dancers and performing animals.

Anthropomorphised animals became an increasingly common feature of the entertainment. Putting the tea-drinking chimps to shame, examples included the marvellous spectacle of dogs dressed up to perform a canine re-enactment of the storming of the Bastille. The Learned Pig was another member of the circus cast, who appeared to read from cards placed on the floor of the stage. Though this prompted the symposium guests to chuckle it had apparently provoked a profound realisation in one contemporary witness, as reported by children’s writer Sarah Trimmer in 1788:

“I have,” said a lady who was present, “been for a long time accustomed to consider animals as mere machines, actuated by the unerring hand of Providence…but the sight of the Learned Pig, which has lately been shown in London, has deranged these ideas and I know not what to think.”

‘Deranged’ is a telling term that suggests how the normal hierarchies of nature were reversed, wherein brute nature was apparently raised above its usual status in creation. Here was a confusing vision of animal/human relations that no longer conformed to the simple order in which animals were firmly set within man’s dominion. Dancing dogs and erudite swine seemed to destabilise the still widely influential account of animals, expounded by Descartes, as nothing more than insentient automata.

Dr. Kwint discussed how cultural production, in the form of the circus, both reflected and shaped a more sympathetic sensibility towards animals, which was partly mirrored in the enlightened rationalism of the age and the development of the brain sciences. Animals were increasingly understood as more than mere machines programmed to behave according to divine dictate. Moreover, cultivating a humane sympathy with animals was becoming an index of good citizenship.

The age of Romanticism, with its emphasis on nature as sublime and untamed, further encoded the changes in the human appraisal of animals. Artists such as George Stubbs, Gericault and Delacroix showed an aestheticised appreciation of the primal power of these unbridled animals. The horse, regarded as a noble species, was used as a metaphorical expression to depict emotional states – racing, in flight, or being attacked by wild animals. Once more, a form of anthropomorphisation further emphasised the affinities between man and beasts. Mazeppa, Byron’s Romantic narrative poem featuring a young man punished for his love affair by being tied to a wild horse which is then let loose, found its expression at Astley’s Amphitheatre to melodramatic effect. Other equestrian dramas flourished, including productions of a variety of Shakespearean plays such as Macbeth, Othello, and, aptly, Richard III.

Intriguingly, the early circus did not only employ animals as performers; it also provided demonstrations of good practice in animal training and husbandry. In so doing the circus conveyed its credentials as a civilising form of entertainment for an enlightened age (with respect for land and property, and all the power and authority invested in them). This contrasts with other popular forms of entertainment of the age such as football and fairgrounds which were regarded with suspicion and hostility, associated with vice, disorder and laziness. Such demonstrations, particular those relating to the care and instruction of horses, were intimately bound up with a system of symbolic values that helped to provide the circus with the cultural legitimacy it needed to survive. Excellent care and breeding of horses were signifiers of a sophisticated hierarchy of social status, wealth, gentility and style, and the horses themselves were symbols of the nobility of such values.

The circus appearances were therefore invested with polyvalent meanings. On the one hand trained and tamed by man to perform obediently, on the other increasingly understood as more than brutes subject to domination: animals became endowed with their own kind of intelligence, their affinity to mankind promising harmony, yet simultaneously suggesting a stable hierarchy turned upside down. Learned pigs, dancing dogs, noble genteel steeds or wild tempestuous stallions: circus animals (and their depictions in visual culture) performed within a complex web of connotations reflecting contemporary tensions in the understanding of human/animal relations.

It seems that these relationships are destined to become ever more complex and ambiguous. Whilst contemporary attitudes to domestic animals suggest that the relationship has developed into a role involving emotional support akin to that of a friend or family member, at the same time, scientific and technical innovations are changing animals’ roles in the field of biomedicine, particularly in the sourcing of organs and cells for researching, controlling and curing human disease. It would make a fascinating subject for a future symposium: the consideration of how such developments are altering the symbolic representation of animals and, indeed, vice-versa.