Category
Dissent
Movements & Communities
Weather & Climate
A New Rebellion Takes Root Against Dithering
by Gordon Winch
Published: Oct 13, 2019
Standfirst
Impatient with the lack of effective response from the powers that be, a new movement of climate change activists are examining historical social change processes that succeeded to achieve their ends. One such example is the suffrage movement in England at the turn of the 20th century: after years of back and forth with no substantive shift in government policy, the movement finally resorted to uncomfortable methods of demonstration that helped turn the wheels of legislation in their favour. In the last couple of years especially, in the spirit of Greta Thunberg, many younger people who haven't known what to say are forming their thoughts and speaking up. Gordon Winch, a 21 year-old Canadian who describes himself as an "engineering student, climate striker, and young person on a dying planet", writes here about why and how things must happen now rather than later. His essay is followed by samples from newsletters of Extinction Rebellion, one of several international organizations bent on the acceleration of action for policy change. 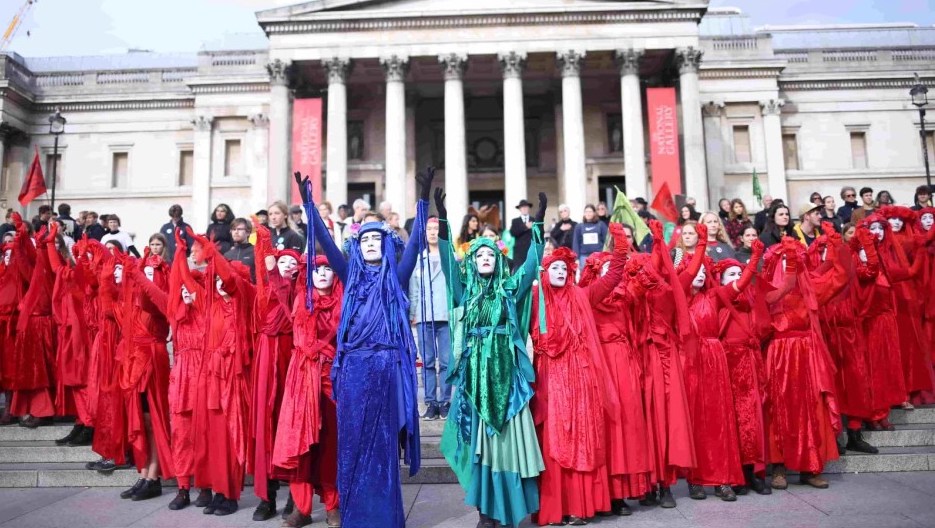 We are in the beginning of the sixth mass extinction.

Yet despite this, we still live in a world where challenging the expansion of fossil fuels is taboo.

Our problem is not technical, but rather one of Overton's Window, loosely defined as ‘the range of ideas tolerated in public discourse.’ Consider the parallels to war: with each passing year of inaction, our enemy grows stronger while most of us go on pretending it doesn't exist. In World War II, Canada and the United States transformed their economies in a matter of years and spent up to 40% of their GDP on the war effort. If we want to take on the climate crisis, this must be the scale on which we think.

Politicians, engineers, and the free market have all failed us. Only a mass movement of people can achieve this radical, society-wide shift in thinking. Just as mainstream views on homosexuality have gone from criminalization to protection in the span of a lifetime, we must transform what we consider acceptable through radical movements — even if those movements inconvenience and shock us – until we can confront the crisis we are so loathe to think about.

As a society, we have faced down existential threats before.

Action on climate change will change everything. It will also require massive public spending and intervention that is antithetical to our decades-long project of corporate liberation and global free trade. We must dramatically raise taxes on corporate profits and the wealthiest Canadians, and use the money to hire millions of union workers to transform our economy. These workers will build renewable energy projects, construct mass electrified public transit systems, retrofit our buildings and re-wild our land.

As well, indigenous knowledge and sovereignty will be central to rehabilitating nature and regulating extraction. While millions flee the destruction wrought by climate change, migrants will need new and strong protections. Politicians will need to get used to saying ‘no’ to the interests of big business.

You may not believe it, but these changes are possible. As a society we have faced down existential threats before. But before we can organize to put out the fire, someone needs to pull the alarm. So even if it hurts your sensibilities, you should thank the rebels around the world who are putting their lives and freedoms on the line.

Maybe even join them. They are the wake-up call we need. §

Joseph P. Overton (1960-2003) stated that an idea's political viability depends mainly on whether it falls within this range, rather than on politicians' individual preferences. 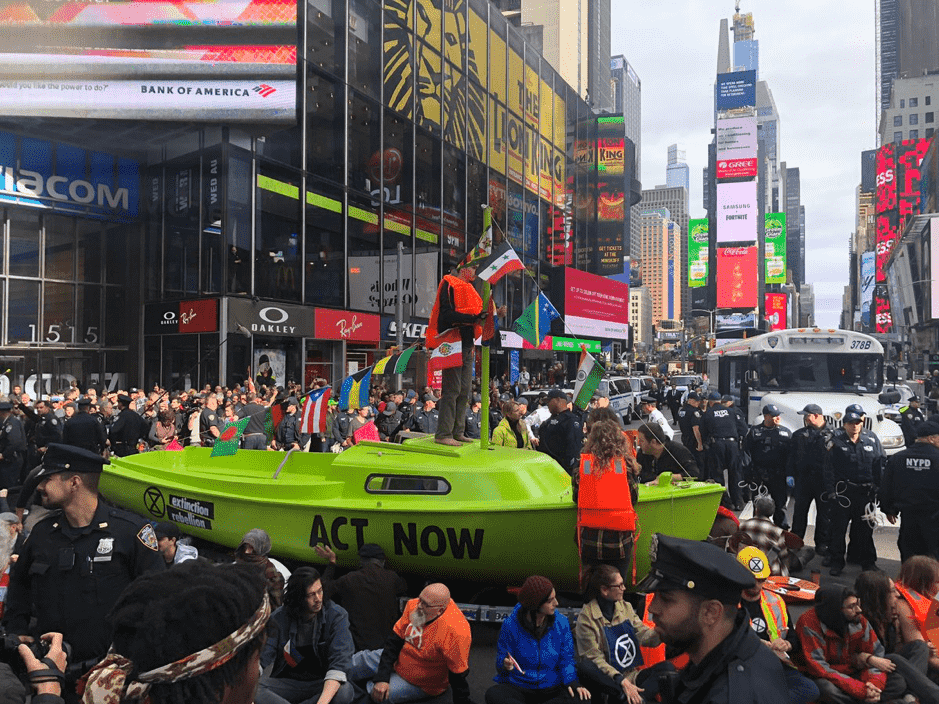 XR NYC shut down Times Square with the help of a large lime-green sailboat that cruised in specially for the occasion. New Yorker rebels swarmed the boat as soon as it moored, attaching themselves to the bow like barnacles using chains and super glue., with 62 arrests.

To pull off the blockade, a decoy protest was launched at the nearby ‘Fox News’ headquarters.100 rebels, buoyed by the freshly-formed XR NYC band, arrived at the news tower just as the boat dropped anchor over in Times Square.

As night fell, Arrestee Support were waiting outside the local jail with vegan curry and hot tea for the released rebels. 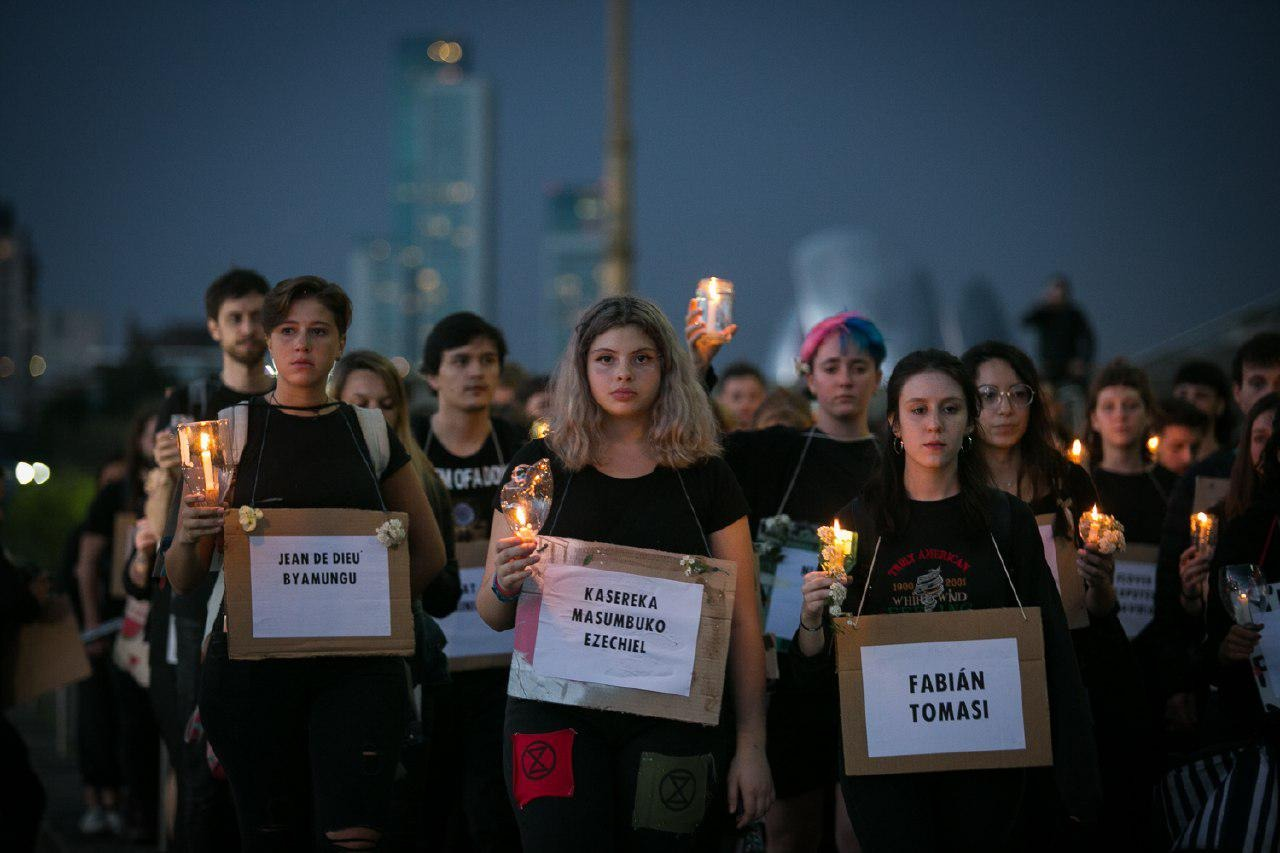 Day of the Defenders. October 9 in Buenos Aires, Santiago, Islamabad, Dublin, Cape Town, London. Last year, 164 activists were killed in the Global South for trying to defend their lands from corporate extractivism. Yesterday, rebels all over the world held vigils to honour them, coming together in a global solidarity action. 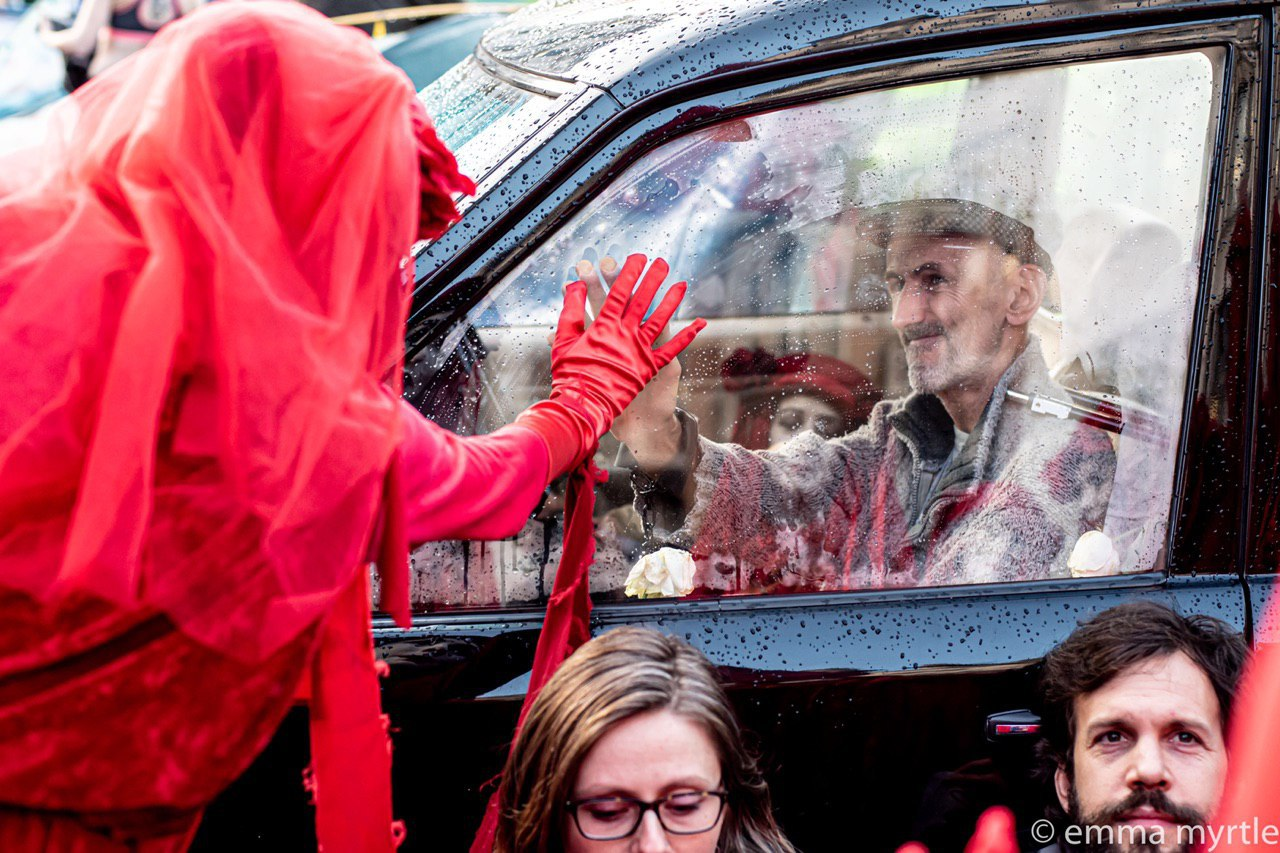 In a grim metaphor for the ongoing extermination and extinction of so much of our planet’s natural life, the police are picking rebels off the street with steady assurance – 92 year-olds and Pink Octopi alike have been removed. . . Arrests in this rebellion (over 600 and counting) were very much expected. More of a shock is the police tactic of forcefully confiscating shelter, food and water, and anything that might allow disabled people to conveniently participate. 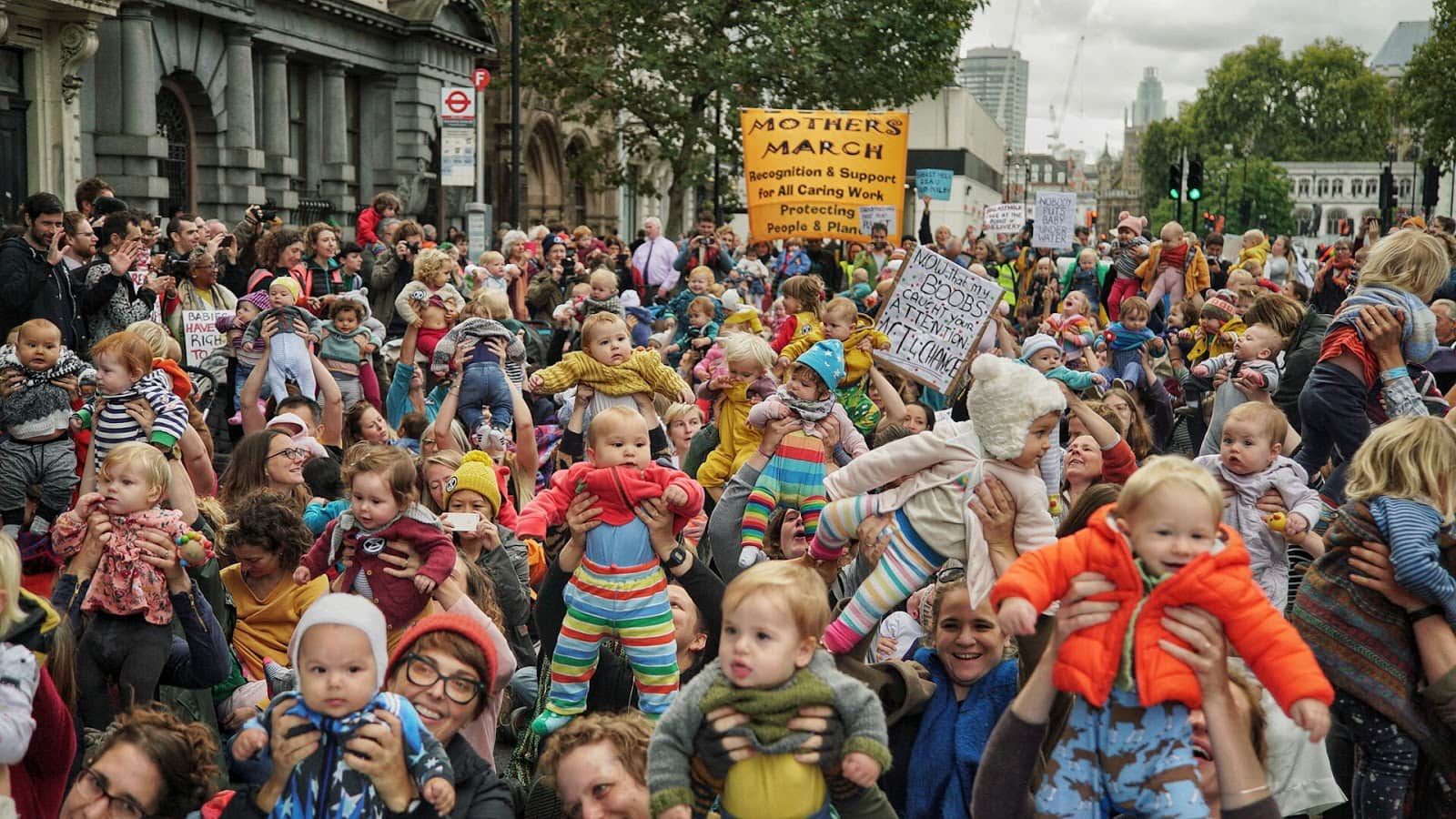 Babies are held high at an emotional mothers’ nurse-in in London. 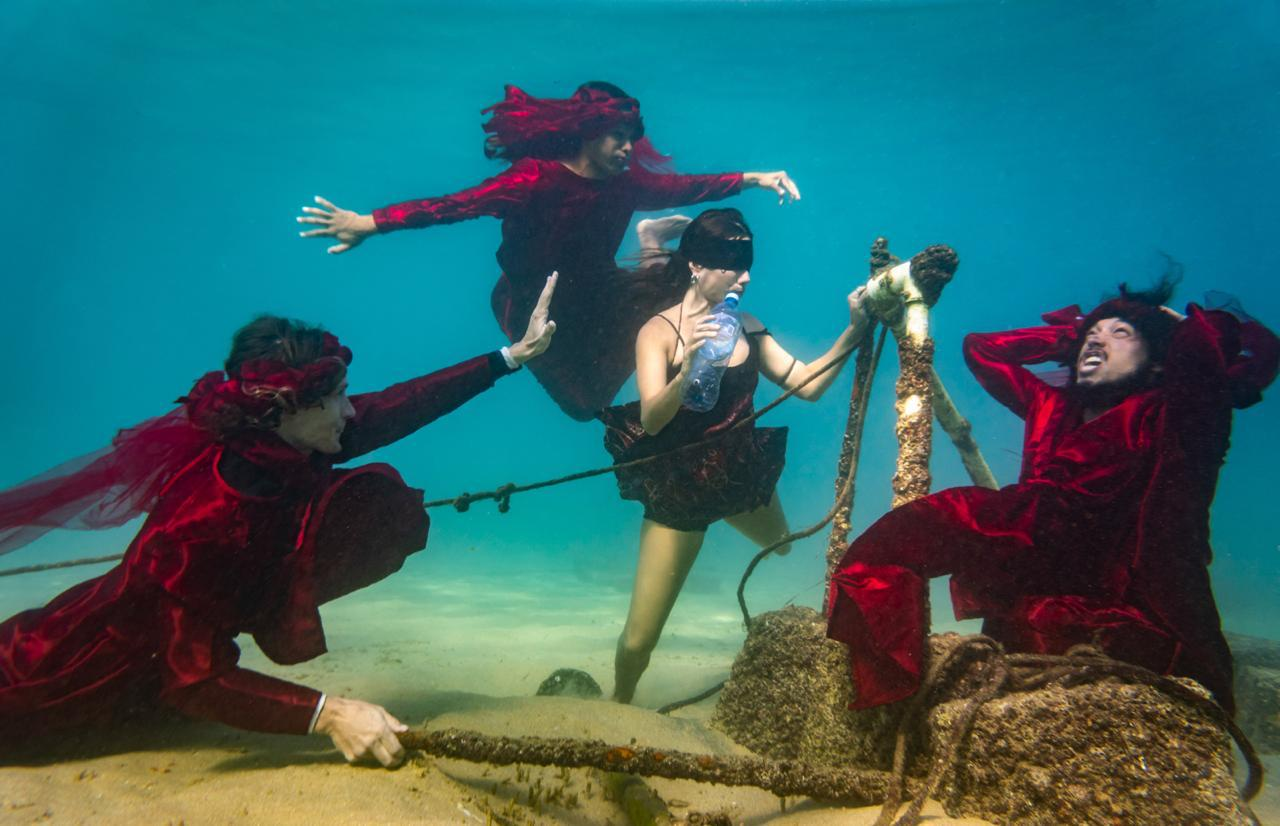 Rebels in Los Cabos, Mexico, perform underwater in a stunning piece about modern life called ‘The vanity, the distraction, the blindness’.

READ about Guardian columnist George Monbiot’s determination to get arrested . . . so he can live with himself.

GORDON WINCH is an organizer with Climate Justice Toronto and a mechatronics engineering student at the University of Waterloo. His personal focus is on the ongoing battle against the colonial, capitalist, and white supremacist structures at the root of the climate crisis, and the ways in which confronting these structures can enable us to build a more just and humane society while saving the world from ecological collapse. He lives in Toronto.

A New Rebellion Takes Root Against Dithering
Young & Primed for Change: A new generation on the march
Heating Up: Climate Passion on the March
'Keep it in the ground' Letters Go to the Top
The Green New Deal and 'Accursed Wealth!'