Category
Prose, Poetry & Poetics
Gardenalia
Space
Poems on Topiary, Unrecollected Icebergs & the Submersed Globe
by Tom Chivers
Published: May 11, 2015
Standfirst
A new poetry collection, Dark Islands, with a striking design by Traven T. Croves that moves out of the box of traditional poetry formats. And, the author fills out our Scribbler's Questionnaire.
Body

from the rosebush [_] Al Gore appears

on an island off the coast of Second Life

(a crew from Al Jazeera trails behind)

I geotag myself in five configurations:

awake; asleep; astride the leafy block

of the monitor [_] latency of carbons

[_] there is no taser in this cupboard:

mark Fallujah with an almanac of snaps

a dusky avatar hovering in the jasmine fields:

black as tar, running thin [_] and so

to cut and frame the privet as an obelisk

or maze of dusted streets: this is an act

of cruelty [_] of which I read

speeding through Babel with soft cap

Anglians I contemplate the tower,

hanging gardens, empire, how so much

history could fit in just one place 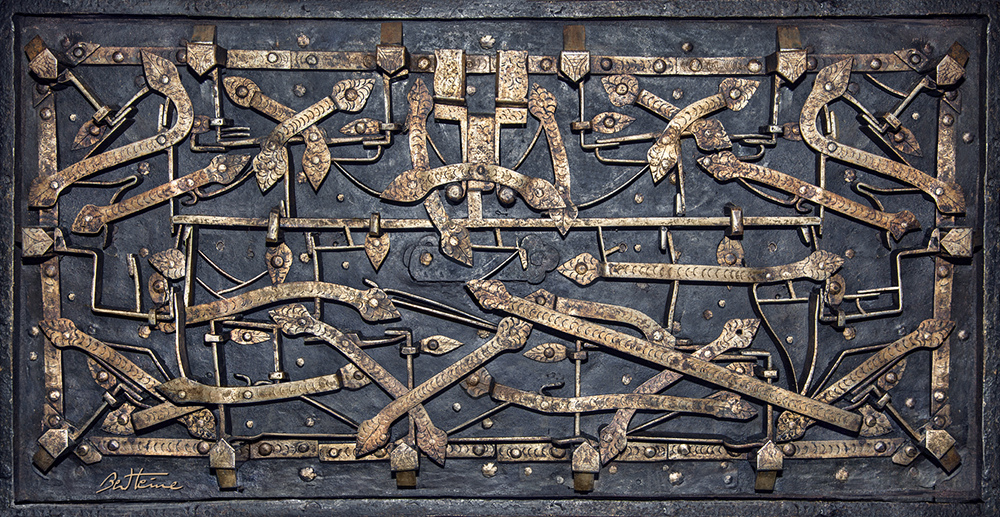 How can I begin to speak of change, my love,

who lives in the smallest of time.

We cannot see beyond the next financial year.

I have no recollection of an iceberg,

though I do recall the plastic bag discarded on the lawn

seen through a window as we tried to speak of change

or how we might begin. Its shape was not unlike an iceberg’s.

For frosty things I say a prayer like a lock.

we watched the breaking of colour on a false horizon.

As if that fizzling ring might hold back ocean.

skeletal fungi shuffled by the currents like a card trick.

Dry bones are washed in their millions:

job lots of diamonds adrift on the tide-line

at dusk. A horned anemone perched on a rock,

junked mine I would hold in my palm like a fruit,

or a can or something stripped of its label

that is lodged in a thicket and turned into stone.

Between the land and the reef there is all that we need.

breathless and   tumbling   repelled and   drawn by the reef.

I could keep here forever   suspended   with my heart

in my mouth and a lungful of sea.

And you are death, the howling of dogs, the noise in the forest,

my shadow, an island enclosed in a cloak.

An island of slaves who stepped off the rock into wide, open air. 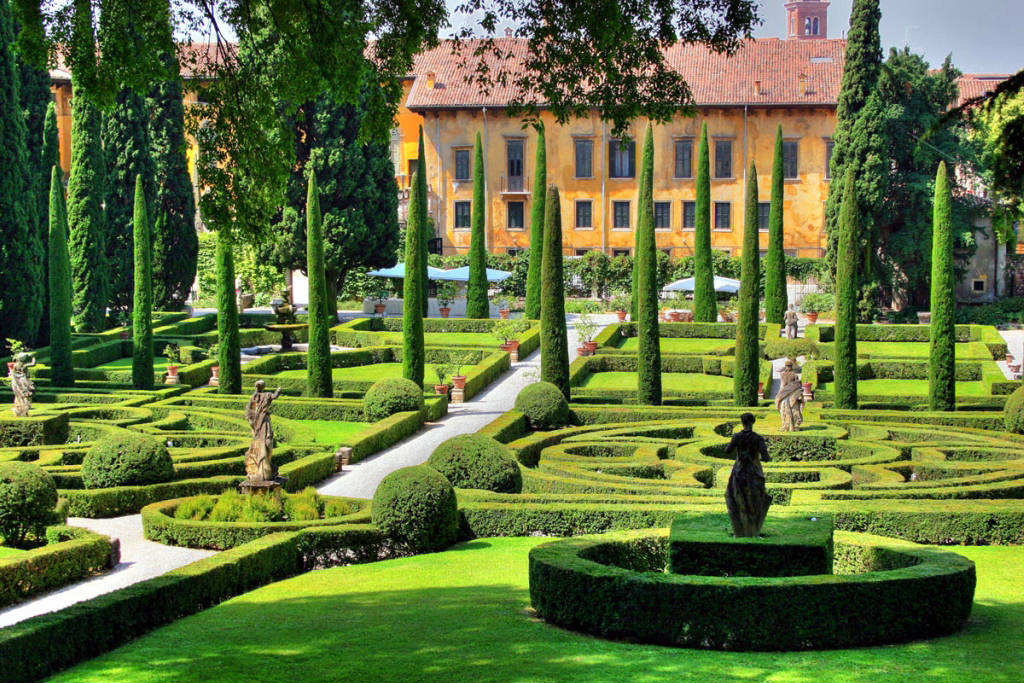 The book is available for purchase here. 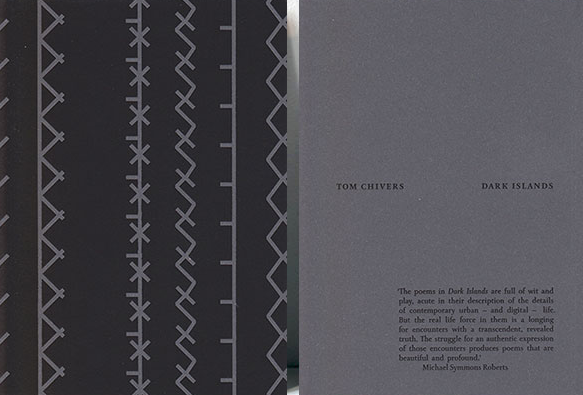 My memories of early childhood are very indistinct. If anything sticks out it would be attending various family weddings in Scotland (my mother was born in Dundee). One was held in a small castle and I remember being shown the 'haunted' tower and glimpsing what I thought was the shadowy aura of 'the Green Lady'. I remain susceptible to such fantasies.

2.   Can you name a handful of artists in your field, or other fields, who have influenced you — who come to mind immediately?

Iain Sinclair is perhaps the most obvious of my influences (and sometime collaborator); not so much in aesthetic terms but because of the expansiveness of his artistic revisioning of the city.

I listen to music all the time. It's my greatest pleasure. In moments of pomposity, I like to think of my poems accompanied by John Taverner or perhaps Godspeed You! Black Emperor.

3.  Where did you grow up, and did that place and your experience of it help form your sense about place and the environment in general?

I grew up in south London, in a little in between place called Herne Hill. Caught as it is between the inner city atmospherics of Brixton and Camberwell, on the one hand, and on the other, bucolic Dulwich with its parks, playing fields and hidden woodlands, Herne Hill gave me a real, lived sense of the dynamic between the wild and the urban. This is something I continue to be fascinated by and to write about. I'm currently working on a non-fiction book called London Clay, which opens with a consideration of the social and geological fault lines of south London.

4.  If you were going away on a very long journey and you could only take four books — one poetry, one fiction, one non-fiction, one literary criticism  — what would they be?

Piers Plowman by William Langland, Bleak House by Charles Dickens, the Bible, and I would replace the literary criticism with some uplifting music: Monteverdi's Vespers, perhaps.

Those were quite bleak years for me, and my memory is hazy, but I was a precocious reader. And I played a lot of sport as a kid (always to a middling standard).

6.  Was there one point when you discovered your ability with poetry?

I guess it was about 15 or 16. From the start I wrote with great intensity. I probably take my work much less seriously nowadays!

7.  Do you have an ‘engine’ that drives your artistic practice, and if so, can you comment on it?

Let's call it the Ambiguity Engine. I aim for sincere confusion! Jokes in all the wrong places. Syntax on the cusp between narrative and nonsense.

8.  If you were to meet a person who seriously wants to do work in your field — someone who admires and resonates with the type of work you do, and they clearly have real talent — and they asked you for some general advice, what would that be?

9.  Do you have a current question or preoccupation?

This new collection [Dark Islands] weaves together a network of ideas around place, the body, protest, money, magic and the occult. I am especially interested in questioning authenticity, whether that's political or religious 'truth', and playing with the idea that poetic language has privileged access to 'real life'. I wear a lot of masks and speak through a lot of voices in these poems: but at my core is a naive desire for radical honesty, 'to smuggle my breath inside yours.'

It is the most wonderful loaded phrase; it sets up all sorts of tensions between what we know and can control and what we cannot. It's a provocation, and something of a paradox. It chimes with how I experience the world. There is a little of the wild in all of us.

11.  If you would like to ask yourself a final question, what would it be?

I would ask myself what I am currently working on. And I would answer: a sequence called Reliquary. The poems are very short and are about why we put rotting things in elaborately decorated boxes.

TOM CHIVERS is a poet, publisher and editor whose poetry publications include How to Build a City (Salt, 2009), The Terrors (Nine Arches, 2009), Flood Drain (Annexe, 2014) and, as editor, the anthology Adventures in Form (Penned in the Margins, 2012). Tom makes perambulatory, site-specific and audio work for organisations such as LIFT Festival, Cape Farewell, Humber Mouth, Bishopsgate Institute and Southbank Centre. He was born in South London and lives in Rotherhithe in southeast London.

Poems on Topiary, Unrecollected Icebergs & the Submersed Globe
Archive
Underground London - The Walbrook Pilgrimage
Foxgloves
'They know from the look in the farmer’s eyes': 3 Poems by Pete Mullineaux

Archive
Underground London - The Walbrook Pilgrimage
'They know from the look in the farmer’s eyes': 3 Poems by Pete Mullineaux
Foxgloves
Ecosystem