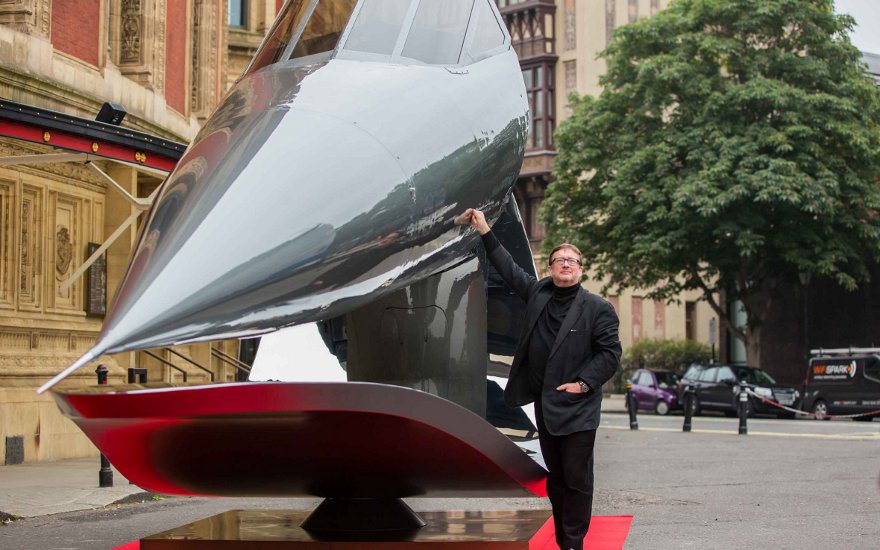 Last Monday TEDx came to The Royal Albert Hall in an afternoon of exciting talks on the intersection between art and science. The ‘Albertopolis’ is the area in South Kensington, founded by Prince Albert in 1851, that includes London’s major museums such as the Victoria & Albert, Science and Natural History Museums. Leading speakers from both disciplines drew on the Prince’s founding belief, that the ‘two cultures’ should and can work together. Today, the debate still rages, perpetuated by C.P. Snow’s infamous article.

Daniel Glaser, Director of the King’s College London Science Gallery, hosted the independently organised event, which was licenced by TEDx. Speakers ranged from Professor Dame Sally Davies, Chief Medical Officer for England, to Nicholas McCarthy, the only one-handed pianist to graduate from the Royal College of Music.

Outside, juxtaposed against the heavy red brick Royal Albert Hall, stood a nine foot high steel sculpture. The ICON [pictured above], created by British designer Sebastian Conran, commemorates the 40th anniversary of the Concorde’s first transatlantic flight. Built with the help of an aerospace engineer, it combines a real Concorde nose with a curved stainless steel base. Looking down into the base at the reflection of the nose and the pale London sky gives the impression it is flying once more. The sculpture serves as a visual reminder of the guiding principles of the Albertopolis: design and engineering, art and science, are not only complementary but often one and the same thing.

The Albertopolis area was developed shortly after the Great Exhibition in 1851. It was so lucrative that the organising body, The Commission for the Great Exhibition of 1851, still exists today and supported Monday’s event. The hall was originally titled the Royal Albert Hall of Arts and Sciences and remains a home for both disciplines, hosting talks by leading scientists as well as concerts such as the Proms.

It is in the spaces between that the most exciting advances can be made.

Andrew Shoben, artist and founder of the collective greyworld, brought the Albert Hall to life with a live human music box. A camera from the ceiling turned live footage of the stalls into a grid. He asked the audience to raise their hands to a variety of questions (including, “put your hands up if you’re bald”). Clusters of hands were detected by the camera and converted into a digital music box. Andrew posed a variety of different questions to create the melody, bass line and counterpoint.

Campaigner and co-founder of Tourettes Hero, Jessica Thom, also gave an uplifting talk on using Tourettes as a source of inspiration for creativity and humour. Jessica says “biscuit” 16 times a minute, occasionally interspersed with “cat sexy pyjamas” or “Aladdin’s dead!” She encourages the audience to laugh; to tic in front of a laughing Albert Hall must take limitless courage. Jessica’s website, Tourettes Hero catalogues her often hilarious, and sometimes shocking tics as a source of inspiration for visitors.

Other speakers included Max Barclay, Collections Manager at the Natural History Museum, who managed to inspire the entire Albert Hall with his ferocious passion for beetles, and Hannah Redler, Head of Media Space and Arts Programme at the Science museum, who makes visitors dress as cockroaches for a tour. Redler’s talk captured the essence of the day: how and why the arts and sciences are complementary and can work together. For Hannah, art and artists offer new perspectives on the “neutral authoritative voice” of science. Equally, science can facilitate and complement art, as was seen with Andrew Shoben’s live human-digital music piece.

The event continued outside the main arena with displays and activities during the breaks. Design and invention trio Vitamins presented a foldable wheelchair wheel, while Jiggling Atoms, a design and illustration project exploring particle physics held a pop-up exhibition of their artists' work. Monday’s event was an important record of ground-breaking developments on the intersection of art and science. Both disciplines offer new angles for each other, and it is here in the spaces between that the most exciting advances can be made.

Cosima Gretton is an art/science curator, with an interest in neuroscience, neurology and psychiatry. She is a director of AXNS Collective.
http://axnscollective.org