A Brief History of Text Life

Category
Prose, Poetry & Poetics
Language & Linguistics
Tools & Technologies
A Brief History of Text Life
by Herbert Wright
Published: Jul 01, 2017
Standfirst
When it comes to messaging the future, no one beats the Romans.
Body

LONDON — You could say the Ancient Romans liked text messaging. We know of maybe half a million Latin text messages inscribed in stone. We don't know the total amount of inscriptions the Roman Empire chiselled out, but that must be a fair chunk of them. These were messages that were found, not the other way around, but most of them were like SMS and Twitter: short. Sure, the longest one (a biographical tribute to a heroic dead wife, known as the Laudato Turiae) ran to over 10,000 characters. But carving text into stone took time and labour, so much fits into Twitter's limit — 140 characters.

Telegrams could be as long as you liked, but they, too, became super-brief, because you paid by the word. And in terms of traffic, they were huge; in 1945, around their peak, the US alone sent over 236 million telegrams. At that rate, all known Roman stone texts would have been telegraphed in about 16 hours. But if every inscription was a tweet, it would take just 83 seconds to send — at current global Twitter traffic rates. Hold on, you may say, what about those over 140 characters? Easy. Twitter also sends photos.

Maybe smells, flavours and touch will join the mix, when practical technology emerges.

On the other hand, if every tweet sent in a day was inscribed on an A4-sized stone tablet, it would need 22.5 square kilometres of stone. That's enough to completely clad 402 versions of Europe's tallest skyscraper, the Shard — including it's angular vertical nooks and crannies!

When it comes to sending messages to the future, the Romans beat Twitter hands down. Their messages have already reached out over two millennia and are set to clock up a few more. Stone inscriptions last. They've survived the wipe-out of civilisations, or even (in the case of a 39,000 year-old Neanderthal grid-like carving in a Gibraltar cave) entire human species. Paper records may survive just centuries before bookworms, humidity, acidity and light erase them. We talk about our personal data lingering, like ghosts in the machine, but the Internet hasn't been around long. Digital data is volatile. Dead software and hardware have already rendered much unreadable, cosmic rays continually corrupt data, and databases get churned. With messages, the more tech there is in the medium, the more ephemeral its life. 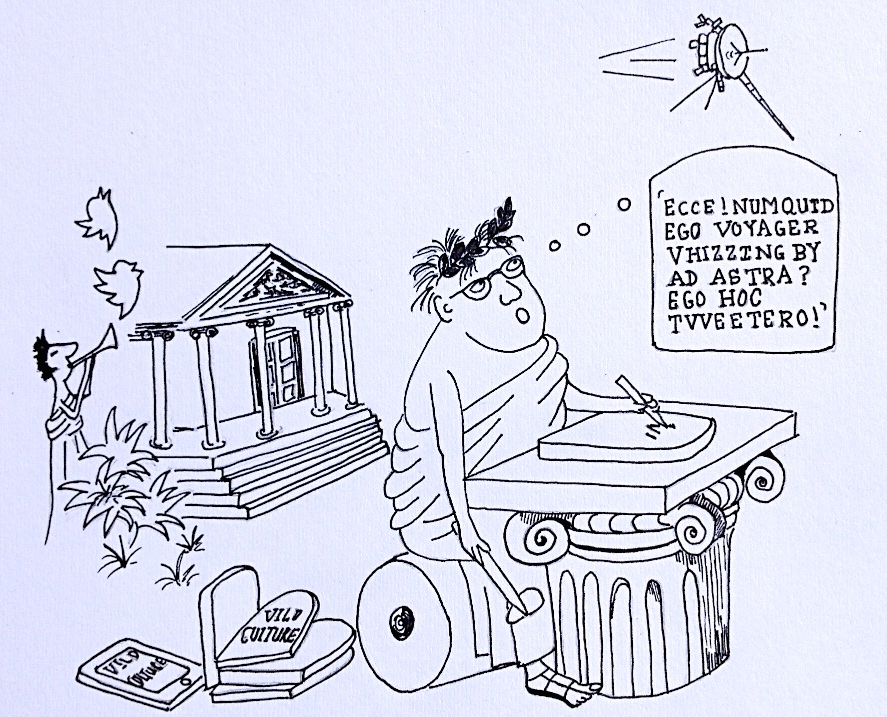 Take a tweet, for example. Wisemetrics calculate the tweet half-life (the time for it to get half the hits it ever will) at 24 minutes.

That doesn't stop 284 million users in 2014 (quarter 3) tweeting. It doesn't seem to matter that the tweets don't last: posterity is not the aim. We tweet for transient reasons, from FOMO (fear of missing out) and subtle bragging to news updates and marketing. To some, tweets are the new prayers — we think good things should happen if we send them. Some collect, organise and display tweets they receive on dashboards, such as Hootsuite, that are continuously updating. Give such a platform a divine tweek, blow the display up to widescreen cinema size, and it would surely be a must-have for any god with prayer-happy followers.

Humanity has already messaged real data to the heavens, and effectively to eternity. We're not talking radio/television signals, which would be noise by the time they reach nearby stars. These despatches were engraved on aluminium or copper. In the 1970s, NASA attached plaques with pictorial images on the first space-probes to leave the solar system — Pioneer 10 and 11, then Voyager 1 and 2. NASA has used a map of pulsars to message where Earth is, on space probes. Pulsars appear to flash on and off but that's just because their beam sweeps across us as they spin. The maps include our position relative to nearby pulsars (neutron stars that radiate a regular radio signal) — just in case an alien intelligence ever found them. Physically, the messages are good for billions of years.

NASA has used a map of pulsars to message where Earth is, on space probes. Pulsars appear to flash on and off but that's just because their beam of radio frequency radiation sweeps across us as they spin. [Pictures based on a drawing in Astronomy: The Cosmic Perspective, by M. Zeilik and J. Gaustad.1 ]

Messaging the future is one thing, but what about the future of messages? Back on Earth, Twitter growth is actually slowing. Competition for attention is hot, and anyone, anytime, can send words, sounds, pictures, and more. New social media platforms constantly emerge to slice and dice the mix — and the audience they can reach. These platforms and apps engage in a Darwinian struggle for survival. Right now, the multimedia app Snapchat looks hot — messages last 10 seconds max before being erased. Vine's format is 6-second looped videos. Maybe smells, flavours and touch will join the mix, when practical technology emerges. We could share food and sex sensations, but many will want more than the hit of a short message.But where does that leave the future of text messaging? Will multimedia make it history?

Not if text itself goes multimedia. And that's already happening. Standard typefaces and fonts have extra ammunition: emoticons. A human face expressed in punctuation may have been used by Abraham Lincoln as far back as 1862. Nowadays, they appear as pictures, and have become emojis — character-sized (or slightly bigger) graphics that can replace words, not just make faces. Ideograms slot into text, and can easily animate as GIFs (Graphics Interchange Format). Some preserve cultural memories of things past, like steam locomotives (for 'train') and phones with receivers (the bone-like piece you picked up, connected by wire to the apparatus with the dial).

The media for messages will change, but the alphabet is set, as if it were writ in stone.

Picture characters may seem like a fun gimmick, but don't scoff. A spectacularly successful language has been laced with them for at least three millennia, and was inscribed even before Latin. Written Chinese includes characters which are descended from pictures of what they represent, even if they don't look much like them any more.

Ultimately, a smiley face could evolve into a personalised micro-avatar, making a sound when the device it appears on tracks that you are reading it. Animated pictograms may make messages dance their meaning for a fleeting moment.

But we would still need words, and they are built with the bricks of the Roman alphabet. (Okay, W was a medieval addition.) Twitter is in many languages, but analysis by Semiocast indicates 9 of the top 10 countries by user numbers (including multi-alphabet India) — and 9 out of the top ten cities by tweet volumes — use Roman letters. Chinese may be a quarter of all Internet users and rising, but according to w3techs, over four-fifths of all websites in 2014 were still in Roman scripts.

The media for messages will change, but the alphabet is set, as if it were writ in stone. Which it was. When it comes to text messaging the future, no one beats the Romans.

JANE NOËL is a doctor who has lived in Grenada for 18 years. She has been an active part of the community there working as Head of Westmorland Junior School and has helped to promote and develop music, swimming and triathlon programmes on the island. Being mother of 4 she sees as her "greatest achievement.”

Photos by the author.

I'm amazed. I don't think I

I'm amazed. I don't think I

I'm amazed. I don't think I know anyone who understands as much about this as you do. You should make a career of it, seriously, awesome blog!