Holding on to the Lively Traditions

Category
Movements & Communities
Radical Habitation
Agriculture
Holding on to the Lively Traditions
by Matthew Small
Published: Dec 13, 2012
Standfirst
Discovering the roots of a community's traditions through the urban-to-rural migration amongst the youth of Japan.
Body 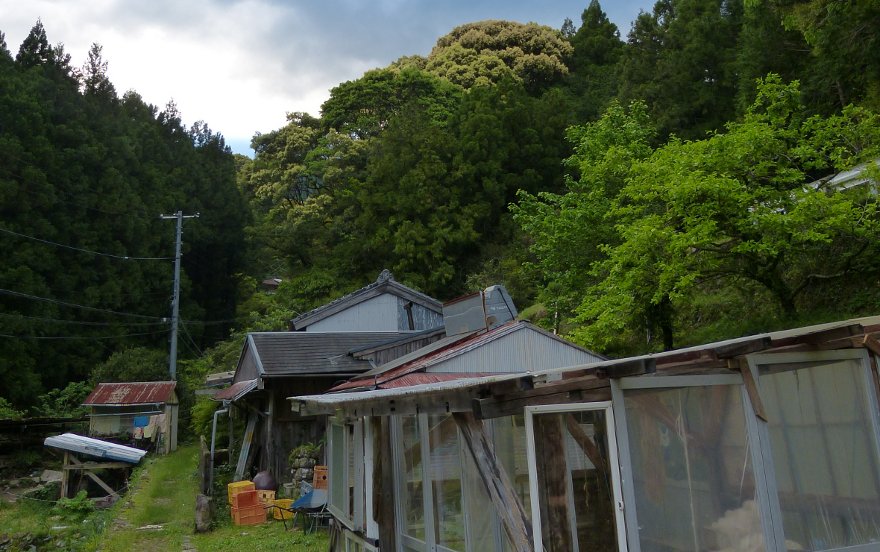 "How long has it been raining for like this," I asked Fuki Jo, our host, as we waited under the cover of the onsen (thermal bath). The rain continued to smash like broken glass around us as it fell with a heavy-dusk over the forest.

"This is the third day," Fuki replied somewhat solemnly, pushing her fingers back through her wet black hair. "So we need to be careful.”

"I see," I said, glimpsing Joe, my close friend and travel companion, calmly rolling a cigarette on a nearby bench. Should I have shared this information with him?

Her concern was understandable. In September 2011, Typhoon Talas brought three days of torrential rain to Wakayama Prefecture, located in the south-western region of the Kii peninsula on Japan's main island, Honshu. At the rain’s end, the typhoon had claimed 96 lives within the surrounding area.

"But this is light rain," Hiroko Takada, Fuki's friend, reassured us in her best and broken English.

"Light?" I simply echoed with my mouth ajar.

Situated within the 400-strong community of Irokawa, and perched on what felt like a knife-edge, Fuki's home was a daring drive to reach. I peered out through my smeared window, rubbing at the condensation, as the moon fought to unveil itself from behind the parting black clouds above.

The next morning, with a slow-rising sun resting over the mountain, a giant broccoli-top of green, I learnt of the region's immense and remote beauty, as a black butterfly, bigger than my palm, rose and fell like blossom dislodged in a warm breeze.

The comparisons of a day seemed too much to compare. The dizziness of Kyoto all but faded away, where Geisha and Maiko girls (young Geishas in the making) scuttled down the narrow streets in their high-heeled sandals, their moon-white expressions unmoved by the flashes of the tourists' cameras. I let the dizziness be and continued listening to yesterday’s rainwater tussle its way down the mountainside, melodically between the rocks and the trees.

Forest covers approximately 25 million hectares in Japan, about two thirds of the entire country. But beauty at first sight is often quick to deceive.

It is a trend known as I-turn, U-turn, and J-turn, updated offshoots of the ‘U-Turn Phenomenon’.

After sitting down for lunch and slurping from our bowls, filled by tongue-tingling miso soup, Fuki told us of Irokawa’s history, with the forest rising and falling in great mountain waves before us.

I lowered my bowl and looked again. Lost amongst the tall Japanese cypresses and cedars, pockets of lighter shades of green glimmered in the midday sun. This is all that remains of the natural temperate forests which were cut down. The land was then used for plantations to cater for the economic boom that Japan had experienced following the Second World War. But as the economy found greater profits elsewhere, the forests were neglected, and never before has humanity's heavy hand been so clear to me – Japan's dark mountains filled the distant view.

Statistics released in 2000 by the Ministry of Agriculture, Forestry and Fisheries of Japan, reveal native broadleaf forests make up approximately 44 percent of the total forested-land. The plantations are slightly less at 41 percent, with this figure rising to more than 60 percent in Wakayama.

These abandoned man-made forests contribute to lasting problems for Irokawa. Merely a stone's throw from Fuki's home, a large dirty scar parts the trees. This landslide, the thunder in the night, had raged down the mountainside on the third evening of Typhoon Talas.

"Last year with broken mountain [landslides], it was very hard," Hiroko explained later as we all sat together, sharing Tako-Yaki – small battered octopus balls dressed by shavings of dried fish.

"My neighbour's home was broken," she continued, as I tried to listen to her and not lose the puffy ball from the clutches of my chopsticks. "Everybody helped him."

The community, which is working hard to improve its sustainability, also works together to tend to its many paddy-fields, with the murky waters filled by perfectly spaced lines of baby rice shoots. Hiroko, a small but determined figure, also grows the locally renowned Irokawa tea. After picking, it is toasted to give a dry smoky taste, nicely offset with a spoonful of sugar.

Fuki and Hiroko are just two of a burgeoning number of young Japanese people who have abandoned the hectic money-led ambitions of the cities to relocate to smaller rural communities. This trend has been recognised and become known as I-turn, U-turn, and J-turn, updated offshoots of the ‘U-Turn Phenomenon’ originally observed by influential Japanese academic, Professor Toshio Kuroda in the 1960s.

Studying this phenomenon today is Ksenia Kurochkina, a Russian researcher based in Waseda University in Tokyo, who has lived in Japan for five years. Having spent the past year travelling the country and speaking to young farmers, she hopes to piece together their diverse reasons for leaving the cities.

You can’t do that here, because you always have to ask people to help with something.

“The term is the route of migration,” Ksenia explained over hot plates of steaming Tako-Yaki. “I-turn is where you’ve grown up in the city, get your education in the city, and then you go to a village.” Fuki however is a U-turn. “She went to the world to study, to travel, and then she came back here to live and work,” Ksenia added. “And then J-turn is when you are born in a small town, go to a big city like Tokyo or Osaka, and then go to settle in a village, but a different place from where you were born.”

Fuki then offered her interpretation of the movement: “In the city money is preventing people from seeing what is important,” she said. “If you don’t talk or don’t see, or if you don’t have friends, you can still live because you have money. You can buy on the internet or you can have friends on Facebook, but you can’t do that here, because you always have to ask people to help with something. Here you cannot live without having a relationship with somebody.”

But this is more than young people simply wishing to adopt a slower pace of life, or a more meaningful existence. It’s about actively working to preserve a traditional way of life.

“The culture of the countryside, like how you grow rice,” Fuki continued, pensively casting her vision over the low table decked in food; “passing this onto the next generation is important, because once it stops, people will forget it.”

In recent times, Japan has suffered severely from natural disasters, which have stretched the country’s resources. Its dependency on power has meant that two of Japan’s 50 power plants have been restarted, after they were all shut down following the Fukishima meltdown in March 2011. The government has since committed to making Japan a ‘no-nuclear society’, but has yet to outline how to realise this in a country that once sourced a third of its electricity consumption through nuclear programmes.

So, as well as safeguarding traditional cultural practices, might these young farmers also present, in a growing and supported movement, a real and sustainable means of reducing the country’s energy needs?

Japan is commonly known as 'the land of the rising sun'. On our final morning in Irokawa, Joe and I, with still sleepy minds, trudged up the dawn-wrapped slopes to meet Hiroko, who greeted us with a copper coffeepot and a gas pump.

"My man is gasoline!" she laughed in her finest English accent, adding that she knew the perfect spot to sit.

The sun did rise on that morning, but not for us. We sipped Hiroko's black home-roasted coffee and, as she smiled innocently and Joe sat rolling his farewell cigarette, we looked out upon the opposing mountain ridge – hiding the sun behind.

We didn't mind. The dark forest still lightened around us, and in it I found words Fuki had voiced on the previous night, echoing within the golden horizon.

“In 30 years we will be here, and our sons and daughters will be here too. So we are the ones who can make a difference.”

Holding on to the Lively Traditions
John Ross: In the Company of a Rebel
Urban Rehab #1: Street Level
'The Book on Ending Homelessness'
Women of the South Against Masculine Assumptions