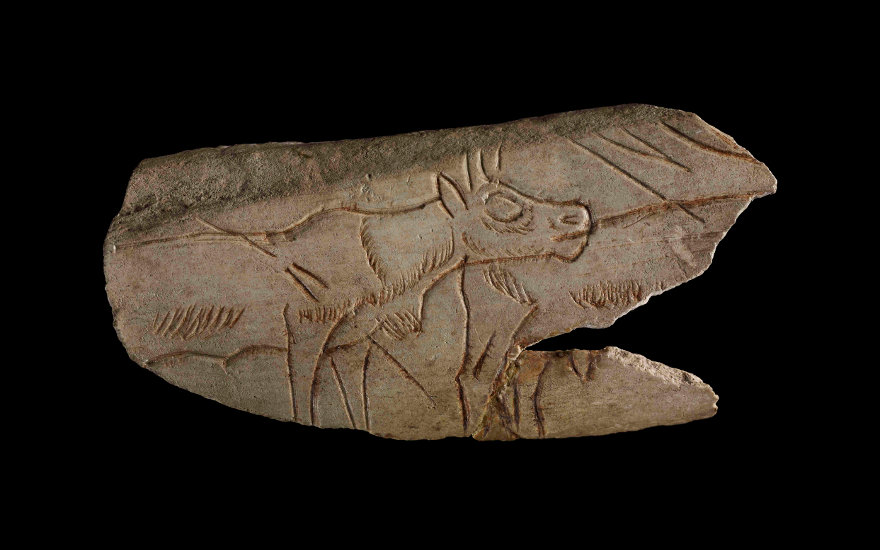 Art pulls a troubled present in two directions: forwards, into a bold new imaginative future, or backwards, into a past of previous possibilities. The British Museum’s new show Ice Age Art attempts to do both: positioning itself at the very origins of both art and humanity – ‘arrival of the modern mind’ reads the subtitle – the exhibition takes us back some 40,000 years to see anew the art of our own time through a lens of nascent creativity.

It is, for a while, an exhilarating ride. On display are some quite extraordinary objects, objects which bring to within touching distance the stretching timeframe of human existence and, at the same time, underline just how tiny that frame is within the vastness of evolutionary history. Taking pride of place at the start of the exhibition is the famous Venus of Lespugue, a six-inch statuette of a nude female carved from tusk ivory and dated to around 23,000 years ago. It’s a beautiful, curving, elliptical figure – and hardly surprising to learnt that Picasso was obsessed with it.

Elsewhere, highlights include 36,000 year-old animal carvings from the Vogelherd Cave; an elegantly fluid diving water bird from Hohle Fels; three Pyrennean Ibex carved on bone – a dynamic evocation of fear and panic; a pair of flying swan pendants from Mal’ta in Siberia; a pointed spear-tip (too fine to be of practical use) with its undulating surface of caramel stone; and, my personal favourite, a bison sculpted out of mammoth tusk 21,000 years ago, with a forceful sense of heft and movement.

But several rooms full of ancient artefacts do not an exhibition make. In mitigation, the show is dotted about with twentieth century pieces by the likes of Piet Mondrian, Victor Pasmore, Brassai and Henry Moore (the Henry Moore Foundation helped fund the exhibition) but their relevance is rarely of sustained interest. There’s also the odd little map to outline changes in ice coverage and a darkened room with a video projection of the inside of a cave. It’s all a bit undercooked.

Introducing the exhibition, curator Jill Cook writes of the works on show: “These striking objects will be presented as art rather than archaeological finds and will enable visitors to see the meaning of art made long ago by people with developed brains like our own.” Leaving aside the problematic proposition that art (from any era) could possess one singular meaning, the real issue here is what the British Museum thinks it is to present an object as art. From the evidence of this exhibition, the correct way to display art is accompanied by all sorts of vague conjecture about what each piece might have meant. So some objects, we’re informed, “may have been spiritually important”; whilst others “may have been part of a special installation”. One caption wonders, whether the objects were “symbols of power, tools or weapons?” Another asks: “Was this an image not just of a horse, but the horse?”

The contents on display form the starting point for a fascinating exhibition, one that could have included so much insight about archaeological discoveries, dating techniques, prehistoric climate change, neurological developments, migration, civilisation etc. It was ultimately an error to eschew such areas of interest and expertise, one compounded by an apparent lack of understanding about what kind of process is necessary to define and display something as art. The idea, for example, that non-representational image-making needs some kind of apologetic justification surely went out the window in about 1915? If the curators were so keen to put on an art show, there’s so much more they could have done (contemporary commissions, poetic responses etc) or they could have been boldly minimal, and really focused in detail on a more tightly edited selection. As it is, Ice Age Art does neither, and doesn’t really take us anywhere at all.