Category
Sport & Recreation
Wildlife & Wilderness
Apocryphilia
Touched wild . . . didn't know it at the time
by Fred Fiske
Published: Feb 05, 2017
Standfirst
"The gracious Haitians joined me in the surf, and we frolicked for a half-hour or so, gabbing away at each other in French." It was a pleasant enough day body-surfing at the beach, like so many days doing nothing but enjoying the water and basking in the sun. Though today was different • Our correspondent from Syracuse goes south and sends back a postcard from the edge.
Body

NORTH HUTCHISON ISLAND, FLORIDA — Yesterday I decided to ride my bike to body-surf at Pepper Beach, about a half-mile up the A1A seaside highway. My memory was that the surf was always good there, lifeguards would keep us safe, and I could do some body-surfing, even at high tide when, by our Seashore Bungalow colony further down the beach, the surf was a bit sketchy.

Sure enough, the waves at high tide were grand, tipped up by a brisk breeze. I checked in with the lifeguard, who waved me on to body-surf in front of him. With the air temperature at 85˚F, and water a comfortable 75, swimming was a pleasure. Two boys (actually dashing young men) who turned out to be gracious Haitians (diplomats? students? refugees? smugglers?) joined me in the surf, and we frolicked for a half-hour or so, gabbing away at each other in French. At one point, we all were bunched together as a big wave hit. I felt bodies brushing up against me as we all rode the wave toward shore.

Soon after, we heard an air horn sound from the life guard station. I looked around. Some kids were splashing in the surf down the beach from us, a few fairly far out. It seemed to me as if the lifeguards were calling them in, to come closer. I was tired out by that point, ready to take a break. My Haitian surf-comrades also seemed to be done, and we duly waded out of the surf.

If you're in the water and you touch something like that, then you know . . .

At the water’s edge, a woman was attending to her child, a teenager with Down’s syndrome who was having a high old time sitting and playing at the edge of the surf. The woman looked up at me and said, in some kind of broken English, “Did you see it? Was it …?”

I scanned the water and reassured her that surely there was no shark. It was just the kids, too far out in the water. The lifeguard was calling them in because the surf was so wild, I suggested. She seemed reassured, though still a bit dubious.

I headed up the strand and noticed the flags at the lifeguard station had been changed from yellow (swim with caution) to red (no swimming!). Dripping wet, I approached the lifeguard, who was leaning on the railing above me. Before I could speak, he remarked dryly:  “Did you see it?”

I won’t say my blood ran cold. Or hot. It continued to flow, at least, as I absorbed the shock. “Where?” I asked, shaky and subdued.

“Right out there. Right beyond where you guys were swimming. It was a spinner. As tall as you are. I saw it jump.”

The lifeguard also said he saw a second shark near me, just as I was leaving the water. “It was a little smaller, I think a yellow,” he said.

“There! There it is again!” He pointed north. “It’s headed that way.”

Astonished, I leaped a few steps up the ladder of the lifeguard station, but couldn’t see anything.

“You have to have polarized sunglasses, and even then you can’t always see them. There! There he is. Pretty sure it’s a lemon.” 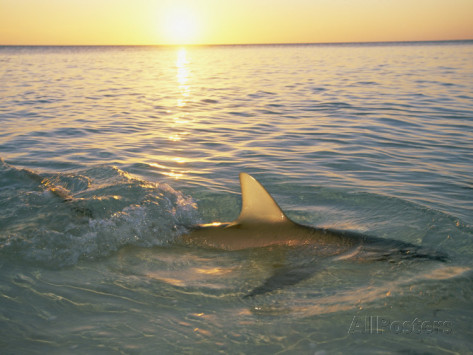 I pumped the lifeguard for more information. A fellow named Dave, who turned out to live in a nearby beach apartment, joined the conversation. It seems none of these sharks is particularly dangerous, though they can bite you. They have teeth, after all, like bluefish and no doubt others. The sharks are looking for fish, not people. But when the water is murky, churned up by lively surf, they may mistake a person or some part of a person — a hand or foot — as a fish and . . . well . . . let’s not dwell on it. The lifeguard said surfers at the Fort Pierce Inlet, where the waves tend to be gnarly, just swim with the sharks, live-and-let-live style. It doesn’t seem there are reports of serious shark bites or related incidents. (However, an elderly woman on a three-wheel bicycle I encountered later at Cumberland Farms said she tracks the GPS coordinates of “Caroline,” a Great White shark she says cruises the east and west coasts of Florida.)

Before I left the beach, I made sure to go back to the woman and her daughter at the water’s edge to tell her that she had been right. "It was a shark; two sharks, in fact. Creepy!"

I am trying hard to reassure myself. I’m only in Florida for a couple of weeks. The beach is right here, the water is warm, the waves are breaking. Really, there's no time to lose! And didn’t the lifeguard and the Internet assure me that these types of sharks are not interested in eating me? This morning I went for my early-morning dip. Not with great confidence that the water would be shark-free, but with a determination to take advantage of the surf and the likelihood that there would not be sharks near me. Just about the first thing I saw after getting in the water was a small fin cutting through the surf, not 10 feet away. I froze, or at least stiffened. Should I flee? Should I take a pass on surfing, wait for another day? Heck, no! After all, it was a small fin. I decided to ignore it and went on with my morning ritual — back exercises, riding a wave or two. Later, wife Chris scoffed at my account. I believe she thinks I am seeing things.

There is a program on sharks coming up at the ocean study institute up toward Vero Beach. I don’t know if we’ll make it or not. We’re pretty lazy. Besides, you can find out plenty about sharks online (go to a "spinner shark" site to see a video of the critter leaping out of the water and spiraling like a football). I do know that today I have been thinking about something the lifeguard told me yesterday about sharks. “If you touch one, it feels like sandpaper,” he said. “Really tight, strong, with skin like sandpaper. If you're in the water and you touch something like that, then you know you've been bumped by a shark.”

I recalled that big wave I rode, along with the two young Haitian gentlemen. I remember bumping against two separate objects. Both felt like heads. One seemed to be at my side, toward my right leg. The other was below me, toward my left waist and thigh. I came up for air after riding the wave, and was surprised to see both men bobbing near me. All three of us had enjoyed a good ride, and I figured at the time we had simply bumped into each other along the way. Hilarious, right? We gave each other thumbs-up and grins, and headed out for another ride.

Suddenly it occured to me that at least one of those 'bumps' felt a lot like muscle-bound sandpaper. 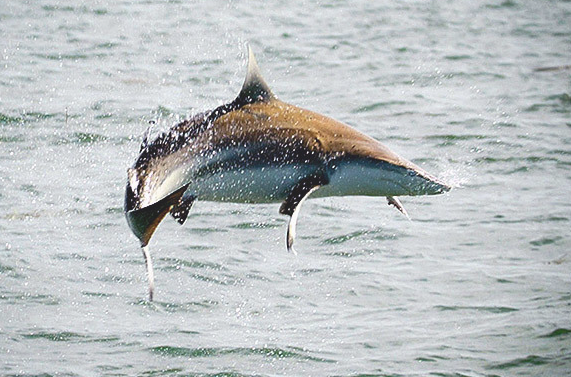 SPINNER SHARKS, sleek, and streamlined, can grow up to ten feet (3 m) long. And while they are not man-eaters, they can and do bite, and they tend to get agitated if there's food around, so it's best to treat them with a great deal of respect. In the winter months in Florida, the spinners lurk in the water and don't appear to be feeding or breeding; they just wait in these comfortable waters for spring, when they will become more active and head north into richer, temperate seas bursting with food. 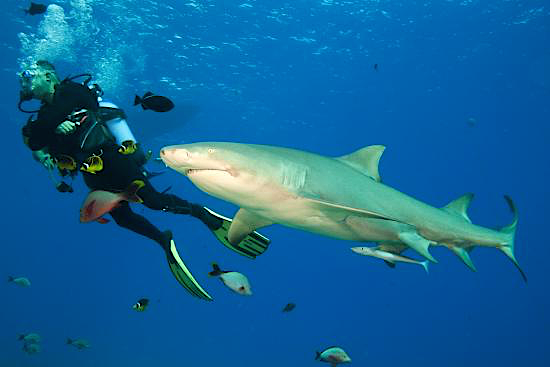 LEMON SHARKS may dive up to 1,300 feet when searching for food, but usually they are found near shore areas at depths closer to 295 feet. Their unusual coloration sets them apart from most other sharks. "Lemon" refers to their light brown, yellow-tinged skin. It provides good camouflage for the sharks, which like to rest over the sandy bottoms of shallow water regions. From a distance, it is hard to tell where the sand ends and the shark begins. One clue might be the presence of small reef fishes, such as wrasses, which gather around this shark to pick off parasites from its gills and skin. This species is most commonly found in the Caribbean, but it also exists in the western and eastern Atlantic and eastern Pacific from southern Baja California to Ecuador. Feeding Behavior: Lemon sharks may chase down other sharks as prey, along with large sea birds, squid, crustaceans, stingrays and eagle rays. This is not an aggressive shark species toward humans; however, when threatened, this big yellow fish will not hesitate to inflict a potentially serious, and even deadly, bite.

FRED FISKE is an independent journalist and composer and spent his career in journalism, mostly writing editorials for The Post-Standard newspaper in Syracuse, New York. He majored in history and literature at Harvard and received his masters from the Columbia Graduate School of Journalism. He grew up in a foreign service family, living in Bangladesh, Germany, Congo and Iceland.