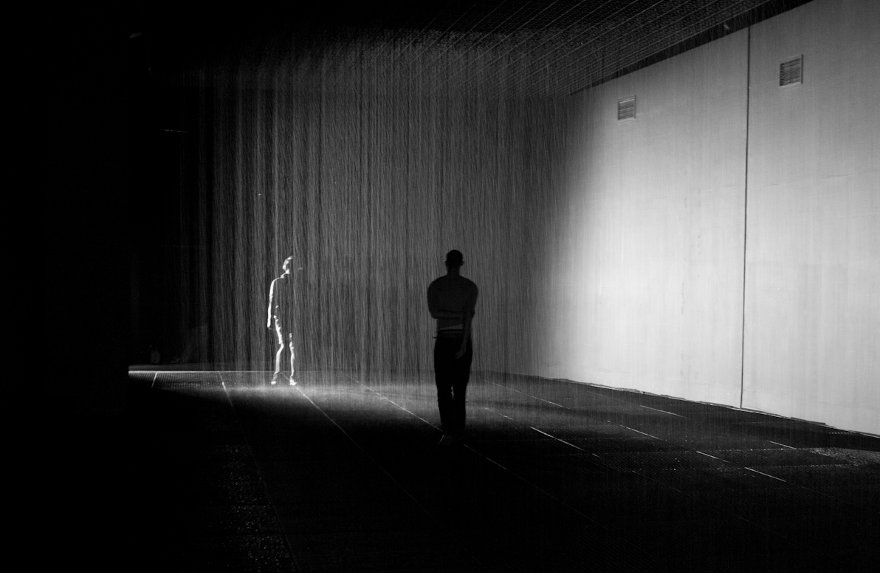 In the mostly dark it’s hard to hear what he’s saying. From round a curving corner, out of site, emanates a dimly constant grey and a drowning thrum of unidentifiable noise. As the talking stops and we walk anticlockwise in gentle trepidation, the brightness levels increase and the volume control rolls steadily higher. A thundering din up close but out of sight.

And then, a vast oblong of hard, white glare crushes your field of vision. Blinded temporarily, the eyes take a moment to recover, blinkingly recalibrating to the binaries ahead: the cavernous black and empty space, the glaring rays of a single, large white HMI light. And of course, the source of all that noise: the rain. Another oblong: this time, raining relentlessly – one of the natural world’s most apparently spontaneous, uncontrollable phenomena, gridded up, boxed off, and presented for public consumption in a contemporary arts venue.

Yes, we’re inside the Rain Room – rAndom International’s major installation in the Barbican Curve that has garnered universally rave reviews and seen over 60,000 visitors queue for up to six hours to get a glimpse of the source of the hype. We’re here, queueless, thanks to brilliantly intimate arts membership club Love Art London – who have even managed to secure the presence of rAndom International themselves for the evening. Whilst they’re rather inaudible beforehand, the discussion that follows – across cognitive neuroscience, health and safety obstacles, and the relationship between motion and emotion – is a genuine treat. In addition, because we're here after hours, there's time for some experimentation: under careful direction, each person is precisely positioned, so that after after some shuffling about the rainfall is stopped completely. A world first!

Even though I’ve personally read very little of the surrounding hoopla, it’s hard not to have high expectations, and the gentle parabola of the Curve builds suspense among our small group to almost feverish proportions. Inevitably, therefore, the actual experience is something of a let-down. From the angle of entry, it’s such a beautiful, grandly austere sight – black and white and columns of silvering rain – but from within it feels less significant. On top of that, the installation is showing signs of age. High levels of limescale in the London water – the Rain Room contains around 2,000 litres in total – have built up and started to block the 3D cameras that cut the fall of precisely modelled ‘rain’. This, combined with the delay effect of gravity, mean that for those wearing dark colours in particular, it is an unexpectedly wet experience. One lady in particular emerges completely drenched (but then that is because she insists on runnnig back and forth like a mad woman).

In a way though there’s actually something nice about this. Not only does the limescale suggest a pleasing sense of nature fighting back – resisting rAndom International’s stark, controlling minimalism, but it also causes a kind of doubling around the idea of expectation. The short introductory wall text talks of the art studio’s interests in “playing with intuition”, and clearly intuition tells us that if you walk into a place where it’s raining, you’ll get wet. But the surrounding chatter has counteracted this: we all know why we’re here, and we’re all expecting to remain bone dry. Which makes the fat, wet droplets that plop repeatedly into my eyes both surprising and rather illuminating. Perhaps intuition and instinct are not simply fixed and transcendental hangovers from our evolutionary origins; they are as open to change (and therefore control?) as rain, and by extension nature itself.

Love Art London starts at £15 per month (or £55 for a year-long gift membership).