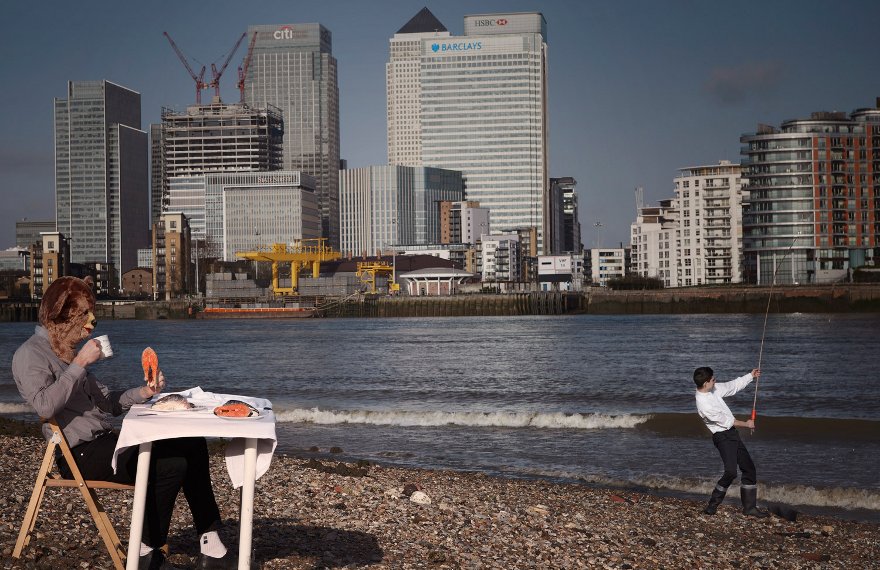 Monday morning, 8am, 30 St Mary Axe. In a large, empty café on the ground floor beneath the Gherkin stands a long, wooden table bedecked with trays of croissants and a neatly folded pile of the day's newspapers. It's an unlikely place to start 2013's edition of Two Degrees, the biennial festival of art and climate change organised by contemporary arts producers Artsadmin. But it works. Hosted by artist/activist Lewis Barrett and featuring some much-needed economics expertise from William Dixon of London Metropolitan University, the Worldstrike bBeakfasts – which are taking place daily throughout the week – see a small group chewing their way through the morning's Financial Times, discussing issues that might arise, asking questions, and examining what it means to view the world through the singular, dominant lens of capital.

By and large, it's a genuinely engaging and thought-provoking exercise, and a worthy way to begin a week that's packed with all manner of great events. Highlights across the rest of the programme include art-activism organisation Platform hosting an immersive spy thriller that explores the “dark underbelly of London's oil economy”; artist Kamala Katbamna leading a makeshift choir of local residents around the East End; Amy Sharrocks presenting a Museum of Water in Toynbee Studios (where Artsadmin are based); poet-publisher Tom Chivers concluding his Cape Farewell-funded ADRIFT project with an evening of poetry and discussion with Michael Symmons Roberts, Justin Hopper and the brilliant Amy Cutler; and the festival's closing event – a day-long extravaganza aimed at rethinking economics, with the likes of Harry Giles, Curious Directive, and the The Institute for the Art and Practice of Dissent at Home.

At the breakfast itself, discussion ranges from the assumed readership of the FT (and what level of knowledge the paper must therefore take for granted); the ironic concept of “sustainable growth”; financial engineering and its potential benefits in the pharmaceutical industry; the mystery of “smartbeta investments”; the ill-conceived origin of carbon tokens; and the nature of debt – from paper money to neoliberal credit debt, and the selling off of the gold reserves under Gordon Brown. Discussion focuses particularly on terminology – the deceptively reassuring phrase “managing risk” for example – and whether it's even possible to incorporate what they call “systemic risk” into new methods of financial modelling.

The problem, ultimately, is not the reductive worldview of the FT, but its widespread application to every area of life.

It's an interesting process, reading a newspaper in this way. I'm especially struck by an article in the Aerospace section, published to coincide with this week's Paris show at Le Bourget. It's amazing, for example, to note how the paper deals with drones. These unmanned aircraft have been used by the US government to kill as many as 3,000 people in Pakistan since 2004. And yet here they are presented simply as “one potentially large source of growth”, with the solitary reference to the palatable “combat” (not death or destruction or the needless killing of innocent civilians) tucked away, as here, in parenthesis. Public outrage at their continued use is dismissed by a divinely understated (and nicely punning) four-word phrase: “political and regulatory headwinds”. Aerospace Correspondent Andrew Parker must have been pleased with that one.

The article primarily focuses on the struggle for dominance of the civilian aviation market between Airbus (owned by EADS) and Boeing – both of which companies are also heavily involved in the euphemistically entitled 'defence industry'. Aside from that reluctant reference to “combat”, the actual reality of arms dealing is described simply as an attempt “to secure deals in emerging markets”. The only other references to the death and suffering that such companies trade in comes through metaphor: an “intensifying battle” between Boeing and Airbus is noted in the first paragraph, whilst the headline declares, with breathtaking chutzpah, “Big guns blaze in wide-body war”.

It is worth pointing out, however, that the Financial Times is, as its title rather suggests, entirely about finance: it is no surprise then that every story is about markets, profit and investment opportunity, even when that story is also about, arms dealing or climate change or the collapse of a garment factory in Bangladesh. This is something missed by several of those at the Monday morning breakfast, whose views are more or less exactly what you'd expect from somebody attending an arts festival put on by an organisation half-funded by the Arts Council. That's no bad thing necessarily, when it's an informed, thoughtful, self-critical position, as held by most of the attendees. But those who dismiss all bankers as either evil or incompetent, whilst simultaneously admitting to not understanding much of what they read in the FT and blaming the newspaper for their own lack of knowledge, cannot expect to be taken seriously.

The problem, ultimately, is not the reductive worldview of the FT, but its widespread application to every area of life by some of its (very influential) readers, who fail to see that, as philosopher Mary Midgley puts it: "One successful set of explanations never rules out the scope for others." Yes, ethical opposition to drone warfare can be dismissed as a political headwind, and the Indian defence industry is indeed an “emerging market”, but that is never the full story. In order to even begin to understand the world, we must necessarily exaggerate, conflate and exclude; but wisdom comes through careful analysis of that which is being overlooked, not from swapping one narrow, all-encompassing worldview for another. And that is exactly why an event such as the Worldstrike Breakfast is such a valuable one. That, and the croissants of course.

Considering a Glacier, While Hannibal Crosses It
The Giving Walnut
Shoveling Out the Dregs of Neoliberalism: A Crash Course by George Monbiot
Seams of Division Coming Unstitched
On Souls Wrapped in Bark